The cost of baseball's broadcast rights in 1961

A highly detailed chart from a 1961 issue of Sponsor magazine shows just how far we've come in 50 years.

Share All sharing options for: The cost of baseball's broadcast rights in 1961

Things looked very different when the 1961 Major League Baseball season rolled around. John F. Kennedy was in the White House and MLB was finally responding significantly to the Dodgers and Giants heading out west three years earlier. At the start of the 1961 season, MLB expanded for the first time since the founding of the American League, with the Los Angeles Angels and the "new" Washington Senators squeezing into the league, and the (old) Senators moving to Minnesota. The next year would be the National League's turn, with the Houston Colt .45s and New York Mets making their way to the big leagues.

America had enjoyed a surge in prosperity throughout the 1950s that was felt almost everywhere. The nation was ready to expand its horizons, with Alan Shepard and the Mercury Seven astronauts only months away from reaching space, so naturally Major League Baseball was trying to follow suit. This meant good things for Los Angeles, the Twin Cities, and the rest of baseball's new markets, where the new taste of Major League Baseball was driving interest off the charts. In the preëxisting markets, however, baseball was only treading water.

In this March 1961 issue of Sponsor magazine, "the national weekly of TV and radio advertising" sought to explain to advertisers why fans weren't watching the national pastime as much as they had in the past:

With the American of the '60's becoming a "participator" again, after the "spectator" years that followed World War II, sponsors -- except in the new cities where interest is high to hysterical -- are faced with the following facts of life:

What isn't so modern is this chart, in the same issue of Sponsor, detailing the television and radio deals each team had in place. 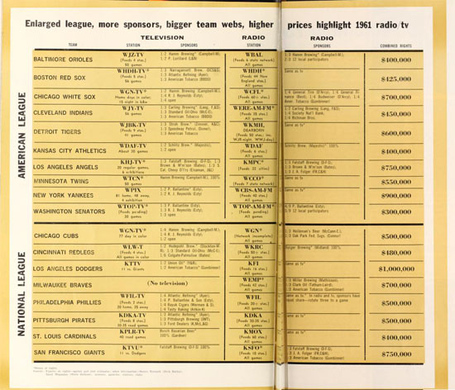 Let's put on our Harry Crane glasses (though you may want to wash off some of the sleaze) and see what we can learn about baseball's media landscape, heading into the first expansion season.

The most striking part of the chart is easily the price of each team's combined rights. The Yankees, for example, were paid $900,000 by their various advertisers for the rights to broadcast the most thrilling season in baseball history, while the "Redlegs" earned only $480,000 from advertisers in their pennant-winning season.

Excuse me for a minute… $480,000?!? For the broadcast rights to 162 games on the radio and on television? In color? That's not even the worst. The Red Sox earned only $425,000 that year, while the Cardinals, Athletics, and Orioles each received $400,000. But they all paled in comparison to the new Senators, who managed to squeeze out only $300,000 from their advertisers. If you ever wondered how things have changed over the last 50 years, this might be the best answer: $300,000 is how much it costs to clean the gunk off of Hanley Ramirez's helmets every year, not the price of a full season of broadcast rights.

* All figures assume an even split in costs between the television and radio rights. This is probably an inaccurate assumption.

Ballantine Beer and R.J. Reynolds weren't the only companies to sponsor multiple markets. The company with its fingers in the most pies was American Tobacco. Based in Durham, North Carolina, the Lucky Strike makers sponsored the radio and television broadcasts of seven different clubs, from Los Angeles to Boston. With $1.25 million in billings across these markets, American Tobacco outspent their biggest competitor, R.J. Reynolds (whose Camel cigarettes sponsored the broadcasts of four different clubs), almost two-to-one. Overall, tobacco companies paid nearly $2.5 million to sponsor major-league broadcasts in 1961.

Beer makers were also very common on the list. With fewer national brands in the industry, however, they were usually single-market sponsors. Not so for Hamm Brewing. The Minnesota-based company sponsored four different clubs as far away as Baltimore, spending nearly $1 million in the process. On the west coast, Falstaff Brewing had the Giants and Angels to themselves (with the Dodgers accepting only oil and tobacco money). That exclusivity cost Falstaff $750,000. All together, the brewing industry accounted for roughly $4.5 million in sponsorship dollars in 1961. Combined, tobacco and beer paid out nearly $7 million of the $10 million spent across Major League Baseball that season.

Adjusted for inflation, $10 million in 1961 is roughly equivalent to $75 million today. When the Dodgers signed their exorbitant television rights deal with Time Warner Cable this offseason, it was valued at $8 billion over 25 years. The value has been knocked down some in negotiations since then, but the Dodgers are still likely to see more than $200 million per season for the next 25 years. That's triple what the entire league earned, even adjusting for inflation, fifty years ago.

There's plenty more to be gleaned from the Sponsor article. The White Sox, for example, took money from Hamm Brewing and R.J. Reynolds tobacco on the television side, but Budweiser and American Tobacco on the radio side. And the Milwaukee Braves, for some reason, were the only team in the league with no television deal at all. The article also featured this telling quote from BBDO, the ad agency behind New York brewery Schaefer Beer.

"When Mr. O'Malley moved out, he gave us room for thought, and we found we could better use the money. Baseball can still be a good buy, but not -- in the old-team markets -- like it was in the old days."

Another agency warned, "It's quite possible that tv baseball will end up, as it already has in at least two cities, as a spot carrier."

Looking at this topic with today's eyes, these statements seem ridiculous. How ridiculous? Bill Gates saying "640K is more memory than anyone will ever need"-level ridiculous. Digging into the data, however, and seeing just how much money was flowing through the system in 1961, the concern these ad men showed is understandable. Americans were changing and no one was really sure how. Baseball, thankfully, has grown in leaps and bounds since March 1961. As I switch over my laptop to show a live broadcast of a nearly meaningless Arizona/San Diego matchup, I think we can all agree this is a good thing.