Michael Beasley, falling to the fringes and the problem with marijuana in the NBA

Marijuana use in the NBA wouldn't be a problem if some players didn't let it destroy their careers. Michael Beasley, the focus of Friday's Hook, is Exhibit A. Plus, the balance GMs must have between secrecy and camaraderie with fans.

Share All sharing options for: Michael Beasley, falling to the fringes and the problem with marijuana in the NBA

Thursday's Hook focusing on TMZ's report of rampant drug use in the NBA ironically came on the same day the Suns traded Caron Butler to Milwaukee, freeing up enough space to take the cap hit that waiving Michael Beasley will require. Beasley was awful on the court last season, but the real problem might send him right on out of the league at age 24: marijuana. He was arrested for possession earlier this month, the latest in a string of drug-related setbacks.

He's bad on the court at this point, bad in the locker room supposedly and gets into trouble off the court. It's really unfortunate that things turned out this way, mostly for Beasley, who could have set up his family for generations and made a difference for kids like him, who bounced around schools and got tagged as troublemakers. Instead of allowing his size and skills write a different story for him to this point, he's become exactly what the grubby ol' doubters said he'd became: a nothing. How unfortunate is that?

This is what gives me pause when I shrug off concerns about wide marijuana use in the NBA. Just as in the wider world, some guys can't handle it. I don't smoke, but I live in California, so I know plenty of people who smoke on a regular basis while maintaining a steady job, a fulfilling family life and some enjoyable hobbies. I also know people who go broke buying pot, can't end their habit and struggle into their 30s and beyond to do anything meaningful. I fear what those folks' lives will look like in another decade or two.

Beasley's on that path: the one where his life is seemingly derailed by the stuff. To his benefit, he has a bunch of cash from the NBA and he'll likely sign another contract somewhere in the world, if not in the NBA. But we've seen too many NBA careers follow this road, and not just related to weed. Alcohol, harder stuff like cocaine, gambling, bad investments (white collar gambling) -- there are a lot of vices in this world, many of them especially attractive to young, wealthy men unaccustomed to having money and poorly educated in financial and, really, life management. I don't claim to know more than any other observer about Beasley, but everything I've read suggests he lacked optimal support becoming an adult, to say the least.

I think a lot of NBA players can totally handle a smoking habit. If it's as rampant as everyone thinks, the product isn't really suffering. Execution and performance in the league are at spectacular levels, especially late in the season and in the playoffs, when TMZ alleges plenty of players treat the conclusion of their fourth random drug test as an invitation to the drug buffet. Clearly, if half the league is smoking, most are doing so responsibly. 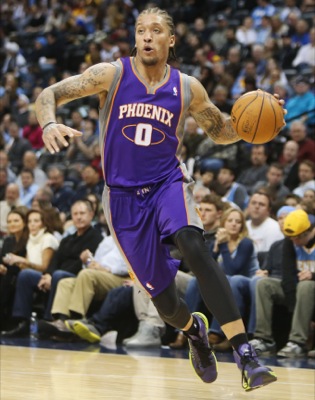 It's a matter of when and how, not if, writes SB Nation's Suns blog.

Beasley has gotten worse every season in the league. He has a problem. I don't know the specific nature of the problem, and I'm betting you don't either. But he has a problem, he's a known smoker, and it's sort of impossible to separate those two facts in our minds while smoking pot remains on the margins of normal adult behavior (in 48 states, at least).

The worst cases are what make this such a tricky debate and concern in both the NBA and society at large.

There has kind of been an air of secrecy surrounding this organization since you took over, and the fans have felt distanced. Why have you chosen this route?

This is a totally valid question. So much about supporting a sports team is about feeling like you're part of a collective working toward a shared goal. Going to games can be explained away as an entertainment choice; cheering your ass off is joining the fight. Spending tons of time thinking, reading and writing about the intermittent rises and falls of a team falls along those lines, too. Any combatant wants a measure of openness from their generals.

So when it seems like a GM like Hinkie is being exceptionally ... withdrawn as he makes his moves, as the team's business side pushes tickets to a likely-to-be bad squad, there's some resentment.

But Hinkie's response is the right one.

Every little edge you can get is important. There is some level of secrecy as teams try not to let on to what they're doing. If we were to have had Nerlens Noel come in and work out before the draft, that would have caused a stir being that we had the 11th pick, and the kind of things that happened on draft night (trading Jrue Holiday to New Orleans for Noel) possibly couldn't have been possible. So we chose not to let teams know who we are working out, and a lot of forward-thinking organizations do that with the comings and goings of potential players.

If you've ever played the game Diplomacy, you know how important having unknown motives can be in negotiations. (I know, Risk! is The Hook's usual go to board game comp, but stay with me here.) In Diplomacy, there are no dice: the success of almost every attack you make, especially early in the game, depends on the cooperation of any allies you may have. But those allies can turn on you like it's nothing. You can't let slip what your actual plan is: you can only offer up a reasonable facsimile that allows you to keep an upper hand on said ally (who you will have to attack eventually anyways).

The problem in sports is that you're relying on paying customers to financially support you, and they want to know what the Hades is going on, too. In this way, fans are really a complication for general managers. Our need to feel involved is a burden on their need for a strategic upper hand. So you have standoff situations, like the one which Cooney describes in Philly. It's an interesting problem, one most good teams grapple with.

But of course, winning solves everything. That's going to be a problem for Hinkie in the near-term as he tries to win over Philadelphia.

• Larry Sanders is a different kind of superstar