NFL offensive weapons: How to use Tavon Austin

Dynamic players like Randall Cobb and Tavon Austin deserve so much more than bubble screens and wildcats.

Share All sharing options for: NFL offensive weapons: How to use Tavon Austin

The 2013 NFL draft was an advertising executive's nightmare. Five of the top 10 picks were offensive linemen. There was only one quarterback taken in the first round and there wasn't a single running back. Considering someone from one of those two positions has won every MVP award since 1987, that seems notable. There was just one offensive skill player taken in the top 15, which really doesn't seem like enough until you consider it's Tavon Austin, who did everything in college.

Austin was a 5'8 wide receiver/running back/return specialist who essentially turned West Virginia games into games of NFL Street (that's right I'm Team Street. NFL Blitz was for posers). Check out the video below of Austin vs. Oklahoma. Seriously do it now. I'll wait.

That’s a season’s worth of highlights from a single game. And just to clarify, that wasn’t some D III directional school like Southeastern Oklahoma Tech State; that was an OU team full of former four- and five-star recruits. I thought it was the best single game performance in college football last year and it was probably the game where Austin established himself as a top-10 pick. Earlier I called him a WR/RB/ KR, but really he’s just an offensive weapon.

Because he does so many things well, it can actually be a little overwhelming imagining what he’s gonna do in the pro game. And as great as that Oklahoma game was, it doesn’t give us the best feeling for how Austin is going to fit in at the next level. I doubt Rams offensive coordinator Brian Schottenheimer will ever line him up at tailback as much Dana Holgorsen did against the Sooners. He’s just too small to handle 20 carries a game in the NFL. And while I think Austin will thrive in a slot receiving role, limiting him to just that seems like a crime against the football gods.

So Schottenheimer has to find a way to get Austin the ball in non-traditional WR ways. Three years ago this would’ve meant running two jet sweeps a game and throwing a ton of bubble screens his way. Three years ago it probably would’ve meant some kind of wildcat package that took up too much practice time and produced underwhelming results.

Thankfully, NFL teams are getting better at getting their playmakers the ball in better situations. That old stuff still exists, but it’s becoming less and less common. It's being replaced with stuff that is both simpler and more conducive to what you already have in your offense to begin with. Teams have been using guys like Darren Sproles, Randall Cobb and Percy Harvin more effectively. They’re doing it without completely overhauling their offenses or adding a specific package of plays for one guy.

Let’s take a look at a screen the Packers ran with Cobb last year that is both less risky and more effective than the bubble screens that dominated the early and mid-2000s. 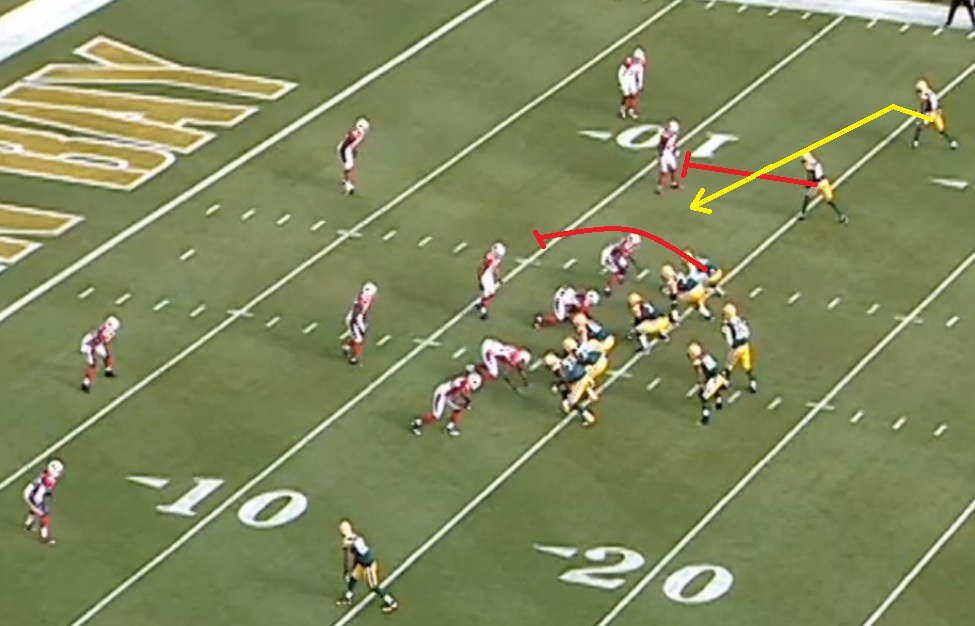 The play couldn’t be simpler from a design standpoint. Cobb runs a quick slant, and the TE and slot receiver (Donald Driver) block the guys over top of them. It’s called a tunnel screen and you’ll see why in a moment. It’s third-and-goal here, and Aaron Rodgers checked to it when he saw Patrick Peterson was playing off-coverage over Cobb. The fact that Rodgers can audible to this play at the line shows that Mike McCarthy didn’t come up with some crazy play to get Cobb touches. He just looked at where Cobb might line up in his offense, and designed a play they could get to at any time to take advantage of a unique talent against the right coverage. 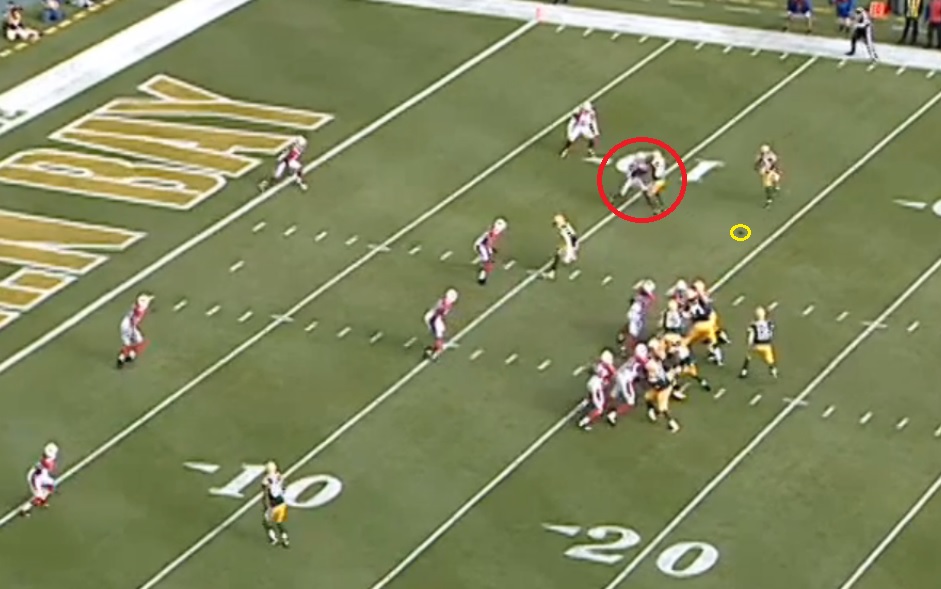 This is where the play gets a little dicey. I think Cobb is close enough to the LOS to prevent any offensive pass interference calls, but Driver is pretty clearly blocking a defensive back while the ball is in the air. By running a quick slant with screen blocking instead of a bubble screen, the Packers have eliminated the possibility of a fumble, but they could get called for OPI. But we’re not here to discuss hypotheticals (except for the fact that the entire article is based on ways the Rams could use Tavon Austin).

Cobb gets the ball and, if the TE and slot guy do their job, it creates an alley (or tunnel) right between them for Cobb to run. And because of the spacing of the formation, it makes it hard for anyone from outside (like Patrick Peterson) or inside (like the Mike linebacker) to get an angle on the ball carrier without running through the second-level blockers. So that leaves just one man for Cobb to beat. Luckily for the Cardinals, it’s multi-time Pro Bowler Adrian Wilson. 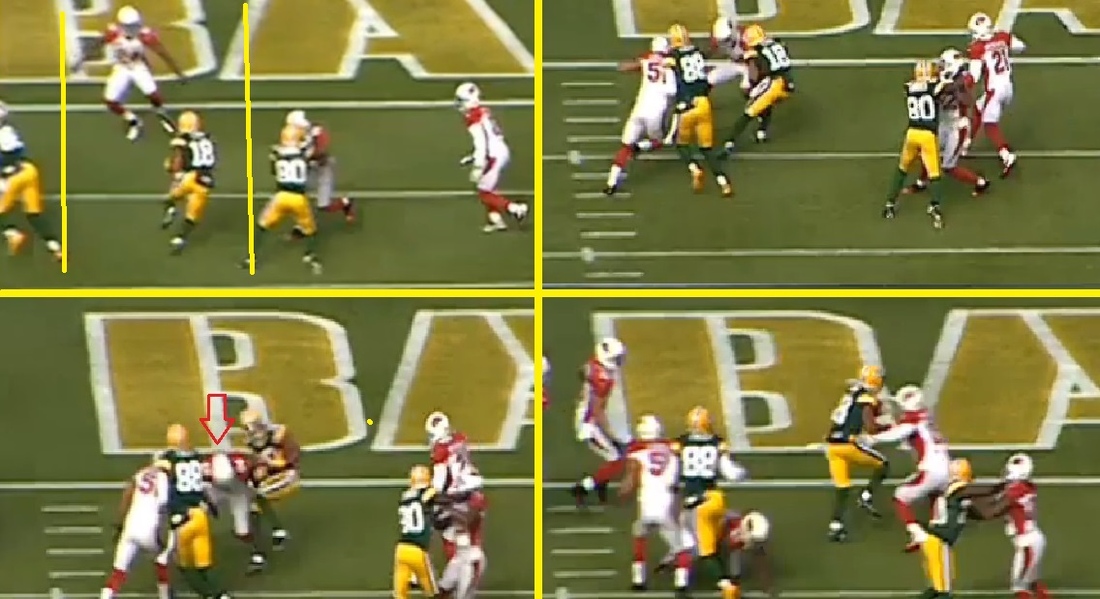 Unluckily for the Cardinals, Adrian Wilson is on the wrong side of the age curve and gets embarrassed by a nifty spin move from Cobb, who goes in to score. In Wilson’s defense, because Cobb ran a quick slant as opposed to, say, a route that required him to run in a weird backwards semicircle (almost like a bubble, for instance), the former Kentucky star had a full head of steam before he got to Wilson. There aren’t many guys in the NFL who will make that play. Adrian used to be one of the guys who could make a play like that, but not anymore.

Oh, and let the record show this is the reason coaches try to teach players not to lead with their helmet on tackles. Player safety is certainly an added bonus, but the average NFL defensive coordinator is much more concerned about missed tackles than concussions, and dropped heads (arrowed) in the open field lead to a lot of missed tackles by guys who end up looking like they lost their contact lenses.

While you still see a lot of bubble screens in the NFL (though usually they are packaged with runs and only thrown when the numbers are clearly in the offense’s favor), the jet sweep is currently on the endangered species list. There are a couple of problems with the jet sweep, but the biggest is that it really is its own animal.

The other issue with the jet sweep is, because of where the ball carrier gets the ball (right behind the QB), you can’t really pull anyone. So you have to get a straight hook block on the edge defender, which is really difficult to do in the NFL.

Teams still want to get the ball outside to their best open-space players, but they have to find new ways to do it. Again, we go to the Packers and Randall Cobb for an example. 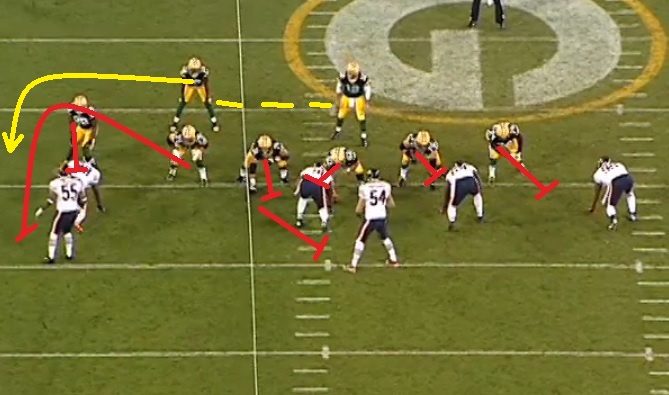 The Packers lined up Cobb at running back in a shotgun formation. Before the picture, the Packers motioned the TE across the formation. By doing this, they ensured that the TE has an angle to down block the defensive end and seal him inside. This blocking scheme actually is just like a pin and pull version of outside zone. There aren’t any tweaks you have to make because of who is getting the ball, so the line has had a ton of reps blocking this exact scheme, just for a different ball carrier. 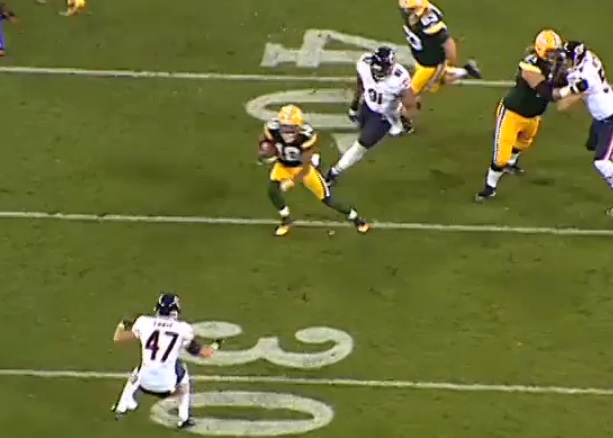 On the play, the o-line blocked it perfectly and once again Cobb was left one-on-one with a full head of steam against a safety, this time Chicago’s Chris Conte. Unlike Adrian Wilson, Conte starts to break down for the tackle early. Look at how low Conte sinks his hips to center himself before making the tackle. He put himself in great position to make the play. 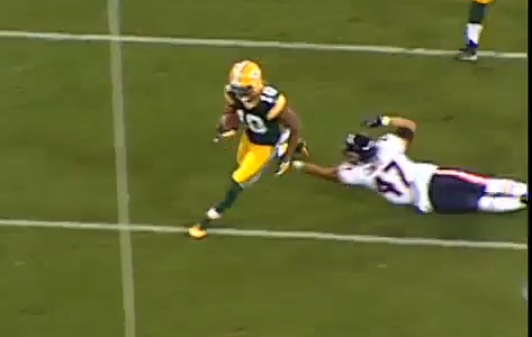 Crap. And this is why you get a little creative to get guys like Cobb touches when you can. The key word there was a "little" creative. If you get the urge to create a new formation solely to get one guy more involved, you are probably doing it wrong. Conte didn’t do anything technically wrong here -- he just got out-athleted by the best athlete on the field at that moment. You put your best players in space to make plays and they’ll come through more often than not. Here the Packers just subbed Cobb in at a new position and ran a base play from their running game that happened to fit what Cobb does well. Simple.

That’s something the Vikings did with Percy Harvin more and more once Brad Childress left. Sometimes it’s as simple as lining Harvin up at halfback and just running outside zone, which is something the Rams should definitely try with Austin this year. Other times it’s narrowing Harvin’s alignment in the slot so you can run the bootleg action with him instead of your backup tight end. 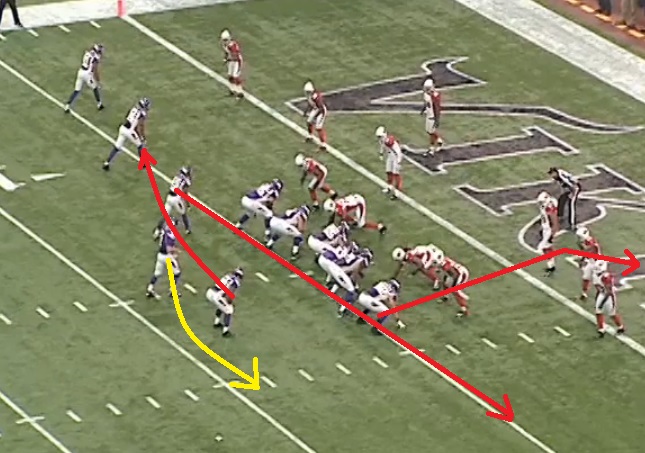 Here, Harvin is lined up in a hipped position, meaning he’s just off the hip of the end man on the LOS (I’m convinced if a football coach discovered milk it would be call "boob juice"). The alignment is pretty standard in the NFL, particularly with the Vikings, who run a ton of zone slice schemes.

The zone slice is a zone play where a hipped player (typically a fullback or tight end) comes across the formation and trap blocks the edge defender to create as wide of a cutback lane as possible. On top of being an incredibly effective running scheme, it also sets up really well for bootlegs since the slice blocker can slip into the flat unnoticed after coming across the formation. That’s what the Vikings are hoping for here and why Percy Harvin is the slice "blocker" instead of your typical big skill guy. 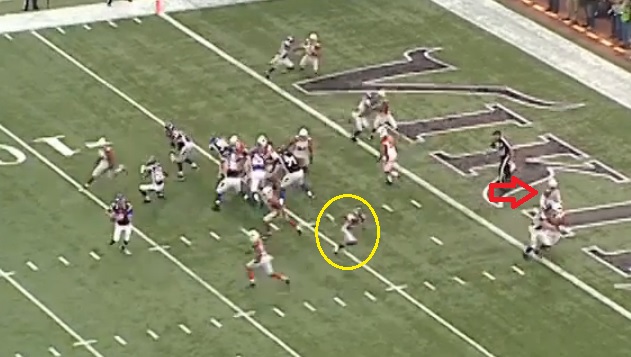 One downside of using Harvin as the guy coming across the formation is that defenses go out of their way to make sure they notice him. Here the Cardinals have their best corner, Patrick Peterson, on him man-to-man. Peterson does a nice job of recognizing the play, but he still has a lot of trash to wade through to get to Harvin, including Kyle Rudolph setting a pick before breaking into his corner route. 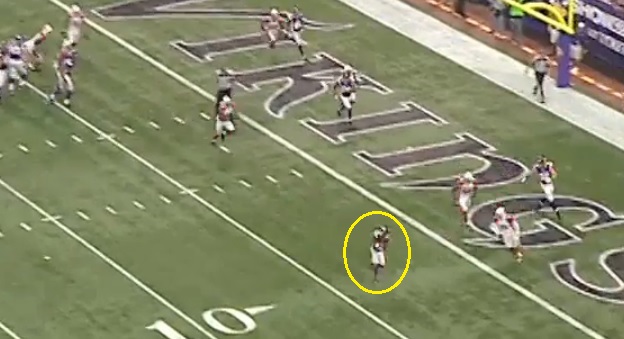 By the time Harvin catches the ball though, Peterson has made his way through everything and is in position to make a play. He just has to make an open field tackle. 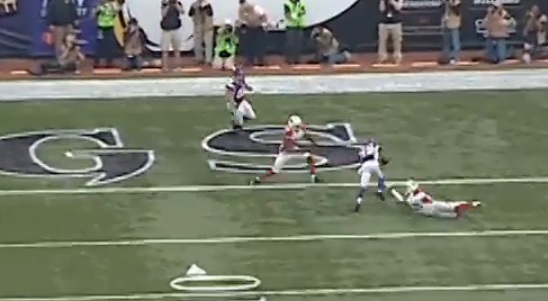 At this point in the article I hope you saw that coming. But really, this play more than the others shows how the point of acquiring these playmakers or weapons like Harvin and Cobb isn’t so you can do crazy new things that you couldn’t before. Where they help you is by making the stuff you already do more effective. This is as basic as a passing play gets in the NFL. The Cardinals had a great defensive call on to stop it, too. They blitzed towards the naked side to force a quick throw and had their best defender in a position on Christian Ponder’s primary target. But Percy Harvin is much tougher to tackle than your typical backup tight end (picture someone like James Casey, who ran this route roughly 150 times for the Texans last year) and as a result scores a touchdown.

If the Rams want to get the most out of their first pick, Brian Schottenheimer’s going to have to find out the best way for Tavon Austin to fit into the offense, not the craziest way to fit the offense around Tavon Austin.