A long-suffering clan looks to an unlikely hero to lead them out of the wasteland. Of course, we're talking about the Kansas City Chiefs.

Share All sharing options for: Game of Throws: House Smith

Perhaps you're familiar with Game of Thrones, the popular HBO series based on George R.R. Martin's A Song of Ice and Fire fantasy novels. The universe depicted in Game of Thrones features warring kingdoms, made up of houses of proud families. Since we're all about sports here, we can't help but equate this with American football. Let's take a look at some of the most notable quarterbacks in the land and imagine what things would be like in Westeros. This is the second in a season-long series.

If you missed the first installment, you can find it here. 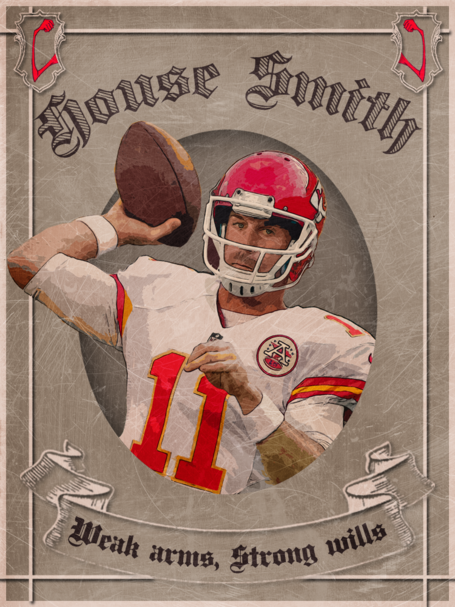 House Sigil: The sigil of House Smith is a red arm, exceptionally devoid of any type of muscle mass, flexing impotently on a gray field.

House Words: The house words are "Weak Arms, Strong Wills." House Smith has the courage of the lion, the tenacity of a tiger and the fortitude of a wildebeest, but at the end of the day it's just going to be checkdown passes and sad dinners at Applebee's. Because there's neither the arm strength nor the time for heroics in House Smith. Pipe down, everyone. We'll get there when we get there.

Location: In the wide-open expanse of The Reach sits Castle Flex, which was previously where the Strongtons held their seat. After being overthrown by House Smith, the statues of brawny, strapping Strongtons seemed out of place, so Ser Smith had them all taken down. He also tried to carve into all the signage so that "Castle Flex" would now read 'Castle ALEX," but everyone knows the truth. Don't bring it up, though. Don't make it weird.

Overview: House Smith was formed when Ser Smith, stripped of his crown by a young upstart and deposed, was literally sold down a literal river and taken in by a roving band of hill people. He whipped them into shape (not literally) and through sheer cunning and force of will, they managed to overthrow the Strongtons and bring peace to the plains. FOR NOW.

Fate: While Ser Smith will ultimately lead the hill people to more good fortune and glory than they have experienced in a thousand years, said glory will only result in the winning of, say, between seven and 10 victories on the field of battle. He will be trampled to death by a runaway stallion and it will be very sad and tragic.