The Yankees just traded for a player they won't be able to use in the playoffs if they get there. What's his story?

Share All sharing options for: A Brendan Ryan primer for curious Yankee fans

Tuesday night, the Yankees traded for Brendan Ryan. They'll use the defensive whiz to replace Derek Jeter at short, which is kind of like replacing Tim Wakefield at closer with Aroldis Chapman. Minds will be blown.

You're probably in the mood for some hot analysis about this big-time deal. Sorry. Some grabby jerk over at Grantland hogged it all. Ben Lindbergh broke down exactly how Derek Jeter costs the Yankees runs, and to illustrate his point, he directly compared Jeter with Ryan. It was a brilliant piece before the trade; the apparent prescience makes it the only thing you need to read about the trade.

But if you're a Yankees fan, and you're not entirely sure what the Yankees just did, or what they just acquired, allow me to present a short primer of Brendan Ryan for the Yankees fan who is unfamiliar with his résumé.

Brendan Ryan is better than …

Since Ryan came into the league, he has accumulated about 16 wins, according to Baseball-Reference.com. Here are players who rank below Ryan in WAR since 2007:

That list is truncated, of course. There are all sorts of familiar names below Ryan. You can take this in several ways. One is that WAR is a junk stat because it doesn't line up with your preconceived notions. Another is that Ryan is a defensive wizard. The truth is probably much closer to the latter, but if you're looking for a way to be skeptical about WAR, Ryan is a great place to start. How can a hitter that bad be so valuable?

It'll keep you up at night until you see it firsthand. It makes sense. You just have to be there, so to speak.

Brendan Ryan is good at defense

That's kind of a repeat of the last point, but we're talking historically good. Here are the players with three different seasons with three or more defensive wins:

Even more impressive is that Ryan played between 129 and 141 games in those seasons -- not quite full seasons. His 2012 was one of the top 50 seasons of all time, according to dWAR.

Of course, dWAR is a hyper-precise stat to measure something that can't be measured in a hyper-precise way. Ryan was .1 better last year than Jack Wilson was in 2009. What does .1 dWAR look like? That's like cutting off a throw from center to hold a runner at first every other month. Still, the point stands. Ryan is legitimately one of the best defensive shortstops in history.

He really, really can't hit, though

Ah, much better. Though still not that good. Surprisingly unimpressive! At least I didn't give him the '68 Dodgers treatment:

Because that would be ugly.

He has a magic mustache, but people were getting suspicious

His performance (by OPS+) matched with his facial hair: 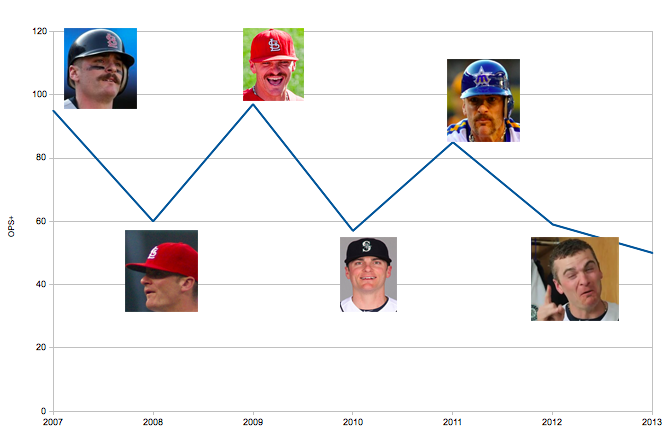 If people figured this out, they'd want the mustache for themselves. And while I might have fudged the timeline a little, the causation and correlation are undeniable.

If you needed to know who Brendan Ryan is, Yankees fans, there you go. Mozart in the field. Meatloaf at the plate. Magnum P.I. on the face, but only when he wants to hit. The only other thing you need to know? This is going to somehow work out for the Yankees because they are undead and terrifying.

• Are the Dodgers signing another Cuban star?

• The Mariners get hosed by the schedule makers yet again

• Which organization is the best in baseball?