Much as we may laud the possible value in a team signing Michael Beasley on the cheap and "saving" his career, we must all remember that he's never been that good.

Share All sharing options for: The powerful myth of Michael Beasley's talent

Narratives develop around a player within his first few full seasons and they stick largely unchanged for the remainder of his career. The work you do early -- or, if you'd rather, don't do early -- generally comes to define your career, whether it should do or not. There is a reason Derek Fisher occasionally still gets referred to as a good defender eight years after he last was and why everyone is still amazed every time Joakim Noah hits a running left handed hook, even though he makes that shot almost nightly. (The latter one is a pet peeve. Can you tell?)

Michael Beasley has taken extremely little care in cultivating his image of a wasted talent. The oft-documented off-court distractions that started from before he even took the court in his rookie season need no further documenting. It is known. Indeed, his career seppuku is close to being all that is known about him.

There have been no on-court positives to offset it all, so there's nothing else for the storytellers to tell.

This is the path he chose. It is now the default Beasley story. "Off-court issues." "Distraction." "Immature." "Bust." And other pejoratives of the sort. This is the default story because he himself has rather made it be so. There have been no on-court positives to offset it all, so there's nothing else for the storytellers to tell.

Now that Beasley has been dropped by his third team in five years, it is increasingly difficult for there to ever be. Each time he is cast aside by a team, the returns it gets for him decrease each time. Miami got two second-round picks for trading him in 2010. Minnesota got nothing at all for letting him go in 2012. Phoenix volunteered to pick up a $9 million tab just to cast him aside two weeks ago. That, in itself, is a testament to the tumult of his career.

Ideally, it would all be transient, a mere blip, a spluttering start to what will ultimately become a productive if slightly wasted career. It can take a few years, but the light can come on for a player. Damon Stoudamire, for one, took many years to clock onto the importance of professionalism over marijuana. But when he did so, he largely redeemed a moribund career. Whether Stoudamire ever maximized his potential is an unanswerable question, as such things can only ever be, but what is known for sure is that Stoudamire managed several more seasons of decent play, and now a good quality coaching career, after he realized the error of his ways. It wasn't too late for Damon, just as it isn't too late for Beasley.

Why Beasley was a risk worth taking 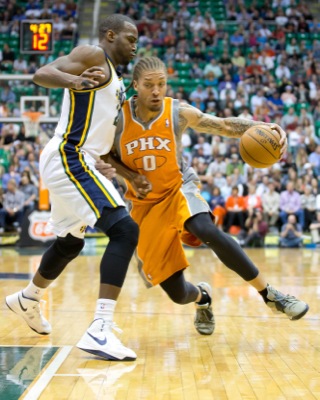 Why the Suns made the right decision to sign him, even if it didn't work out.

There exists, however, a further truth to the tale. Behind the weed, the "distractions" (as we politically correctly like to refer to them) and the lack of the "highest standards of personal and professional conduct" (as the Suns rather succinctly described it in his departure notice), there lies a highly flawed player, one much more flawed than we ever seem to acknowledge.

When talking about the rehabilitation of a player's career, it is all too easy to exaggerate the talent level they are trying to rehabilitate. Beasley, we are reminded, is the No. 2 overall pick from as recently as five years ago, a big-time scorer not too far removed from one of the greatest freshman seasons ever recorded in NCAA history, in which he also led the nation in rebounding. His "raw talent" is "exceptional," "precocious," "formidable," and the like. So we are told, at least.

There is scant little proof of this, however. Beasley certainly has a degree of talent, but it is not that which we hold it to be. The rebounding numbers dwindle further year on year, and the defense and playmaking for others were never there. Furthermore, the scoring talent we build our perceptions of his talent around is based on a faulty premise: that Beasley is a high-quality scorer.

There isn't the evidence for this. Beasley scores because he shoots a lot, not because he shoots well. And the shots he takes a lot are not even good ones to take. The decision-making (perhaps the most under-appreciated facet of a player's talent level to ever exist) is consistently dreadful and somehow getting worse, while the shot-making talent for which he most lauded is only laudable if you ignore the facts that he is a mediocre shot maker from all ranges outside of 10 feet and that he consistently refuses to acknowledge this.

At some point about three years ago, we started exaggerating Beasley's talents more than ever. And yet confusingly, this was also about the time Beasley decided he wanted to be more like Lee Nailon than Kevin Durant. We must reappraise, then, quite what we think of him as a "reclamation" project. We exaggerate what he could be because it furthers the narrative of his redemption. What, though, would we be redeeming?

You can go too far the other way, of course. Notable examples of this in recent seasons include Cavaliers-era Ricky Davis and Raptors-era Mike James, two unlikely bedfellows united by circumstance. Both led bad teams with big numbers, despite having flaws to their game and less-than-star talent. Both, for this reason, have always henceforth been assumed to be fraudulent talents whose entire production is to be disregarded. This is a drastic overreaction that ignores how these players, regardless of circumstances and the context to their production, were genuinely good at the time. Nevertheless, this overreaction happens.

But Beasley isn't Mike James or Ricky Davis. Beasley isn't even Delonte West, a redemption project with a similar narrative who is actually a productive NBA player on both ends of the court. And Beasley definitely, definitely isn't Damon Stoudamire. Beasley hasn't been good since Kansas State and has regressed annually throughout his NBA career. While someone should sign him for cheap simply because of his talent level, they must know quite what that talent level is. It isn't one of a star, nor especially close to it.

Beasley can still be a good quality starter in the NBA if he stops smoking, starts listening, entirely redevelops his shot selection, attacks the glass and suddenly becomes someone else defensively. But that just won't happen, will it?

• Robert Horry's not a Hall of Famer

• Ziller: How to make your teammates better

• 5 reasons the NFL is more popular than the NBA