Welcome back to another episode of Grading the Unwritten Rules, in which we take an unwritten-rules scofflaw and grade the severity of his crimes. In our last installment, we looked at a 20-year-old star who stared a little too long at a home run he hit against the Braves.

In this installment, we look at a 21-year-old star who stared a little too long at a home run he hit against the Braves.

I guess the Braves are just a bunch of killjoys. What's wrong with a little preening after a home run? It's like every Braves player shares DNA with Roger Goodell. Put your head down, opponents. Don't have fun. Just trot to first like a good automaton. Really, how bad could Fernandez's home-run trot have been?

Actually, when you consider that Fernandez hit the home run in front of a fish tank before an announcer screamed "WE TOLD YOU TO COME OUT. WE TOLD YOU TO WATCH THIS ONE TONIGHT," I'm thinking Fernandez's gawking was the third-worst crime against baseball in those 10 seconds. But let's focus on the gawking.

Jose Fernandez's stare-down was a video of a burro in a plaid skirt, six college girls, and Pat Burrell in clown makeup. You know the unwritten rules when you see them, alright. Fernandez absolutely lit one of them on fire.

There are a couple of things at play here, though. First, pitchers don't know what they're doing at the plate. They break their hands when swinging a bat, and they stand 50 feet from home plate. They're hyperactive golden retrievers in the cockpit of an airplane -- they know not what they do. So when a pitcher hits the hardest ball he's ever hit in his life, it might catch him off guard. He might stare. Or, even better, he might think he's doing a typical I'm-watching-this trot like David Ortiz, but about two seconds into it, he realizes he took a second too long. Don't pitchers get a little leeway? They've never done this before.

The other thing is that it wasn't just the home-run trot that got the Braves riled up. Chris Johnson had something going with Fernandez in the previous inning, and when Fernandez rounded third after his homer, he left something for Johnson:

Well, that's an unwritten rule that no one ever thought to unwrite up. Of course you don't spit in someone's general direction as you round the bag, especially if you've had words with them in the previous inning.

But it was Brian McCann who stopped Fernandez and unread him his Baseball Miranda rights, and I'm thinking he probably wasn't talking about the spit. It was the stare, the flip, and the saunter. That's what got the Braves' collective goat.

... this ranks a solid 9.You give him a little slack for being a 21-year-old rookie and a pitcher if it's just the bat flip and jaywalking. And, really, Evan Gattis started it with a stare-job of his own. But the spit is sort of the straw that breaks the back, and, really, if you do this with your arms on a home-run trot as you literally stand on home plate... 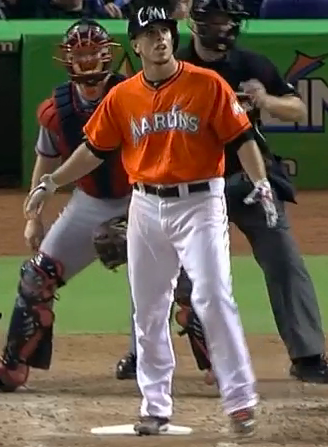 ... you're breaking all sorts of unwritten rules.

To Fernandez's credit, he acknowledged as much after the game:

"I feel I don't deserve to be here, because this isn't high school no more," the rookie pitcher said. "This is a professional game, and we should be professional players. I think that never should happen. I'm embarrassed, and hopefully that will never happen again."

That's kind of rare. A heartfelt apology like that after a ...

"I had a good year, and it ends up like this, on a day like today, which is really important to all American people," Fernandez said on the 12th anniversary of the Sept. 11 terrorist attacks. "It's something that is not right, and I'm embarrassed by it."

Uh, let's take a break, Jose. I think Fernandez would be the first player to win the National League Rookie of the Year and Miss South Carolina in the same year. Why don't you sit the next couple plays out?

First, a screenshot via Chad Moriyama:

And a photo from Mike Ehrmann of Getty Images: 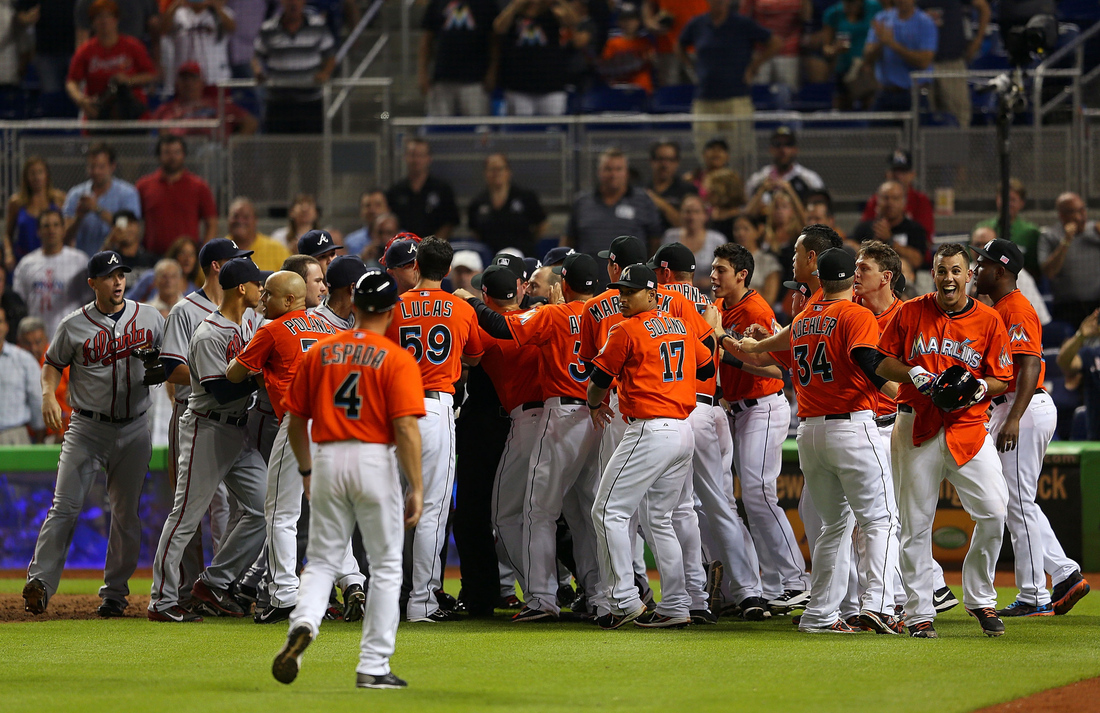 You can click that to enlarge it. You must click that to enlarge it. Fernandez is the Mike Trout of don't-give-a-shit face. The metrics have him so, so far ahead of the next-closest 21-year-old in baseball history. This is truly a season to remember for Fernandez and his don't-give-a-shit face. It's a shame we didn't recognize it until the last start of his season. .

• Are the Dodgers signing another Cuban star?

• Catching up with all of the former major leaguers in Japan

• Which organization is the best in baseball?