Mayweather vs Canelo scorecard photo: How did C.J. Ross score the bout a draw?

C.J. Ross somehow saw the bout between Floyd Mayweather and Canelo Alvarez a draw. Check out the photo of her scorecard that shows what she was "thinking" when doing so.

Share All sharing options for: Mayweather vs Canelo scorecard photo: How did C.J. Ross score the bout a draw?

SB Nation's Luke Thomas was at Floyd Mayweather vs Canelo Alvarez last night and managed to get a photo of the official scorecards for the bout.

The bout had played out in a way where, before the scorecards were read and the official decision announced, it seemed obvious that Mayweather would win by a wide margin. But then, Jimmy Lennon Jr. announced that the decision was a majority, not unanimous, decision. 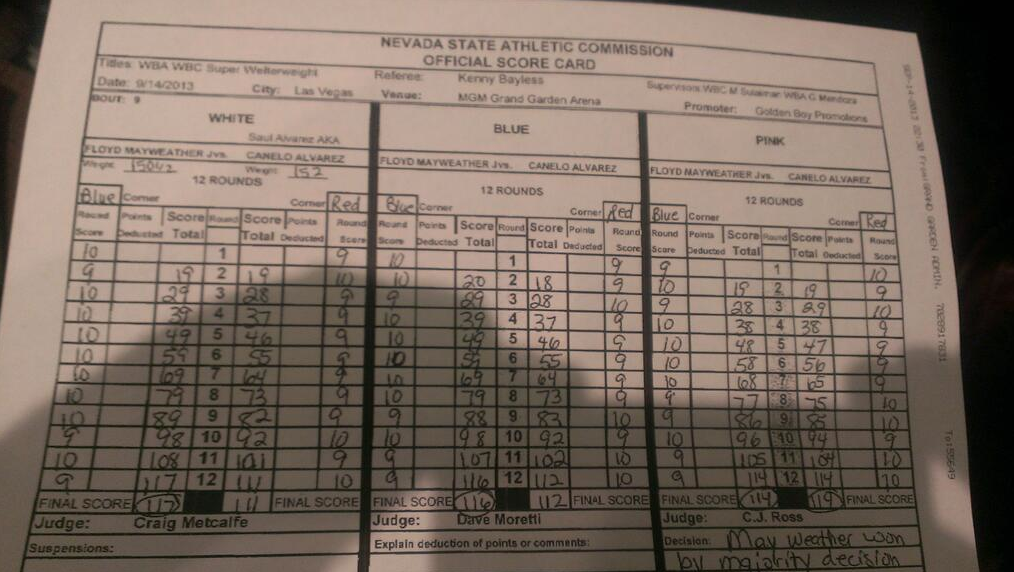 The amazing thing to me is that Ross saw four of the last five rounds for Canelo. At that point Mayweather was very well in control and the rounds no longer seemed particularly close. I could see maybe having seen the first three rounds for Canelo if you were being generous, at that point everything was close and both men were effective, by the end of the fight Canelo was lost and Mayweather was dominating him.

It's a shame knowing that nothing will probably be done to Ross. The Nevada State Athletic Commission lets this horrible scoring go unpunished with regularity. I can name several times where inexplicable, awful scorecards led to that same judge getting major assignments within a few months.

Far too often the commissions look out for the judges, defending the indefensible rather than looking out for the sport. A massive amount of fans tuned in to see the fight last night and were treated to yet another time where something just didn't seem right in a sport with a long history of shady moments.

• How did one judge score fight a draw?

• Mayweather on Canelo: "He will carry the torch"

• After big bout, no follow up in sight for boxing