Rizzo for Cashner: Two seasons later, who says no?

Share All sharing options for: Rizzo for Cashner: Two seasons later, who says no?

This would be a regular feature, except it doesn't happen nearly enough. It's not often that you can look at a trade two seasons later and wonder, gee, would they do it all over again? You could do it for a season with Edinson Volquez and Josh Hamilton -- and, say, I guess you could wonder who would do that trade right now -- but usually the winners and losers of trades become clear pretty quickly.

Delmon for Garza? Garza. Shields for Myers? Well, we'll have to wait a little bit to know for sure, but Myers. How about Andrus, Saltalamacchia, Feliz, and Harrison for Teixeira? Leaning toward that first group, but it's early.

On and on. But the Cubs and Padres made a trade on January 6, 2012, and almost two seasons later, it's still debatable as to who got the better of the deal. Fascinating.

To the other guys
Anthony Rizzo
Zach Cates

When the trade was made, here was a quick, thumbnail description of both players:

It was fascinating, the sort of prospect-for-prospect deal that doesn't happen often enough. And almost two years later, here's the quick, thumbnail description of both players:

The reason you're reading this is because Cashner threw six perfect innings against the Pirates on Tuesday. When he's right, he looks like the best pitcher in the world. He's Strasburg, he's Fernandez, he's Harvey. For a few innings, at least.

Except here's his velocity chart from the last three years, by way of FanGraphs: 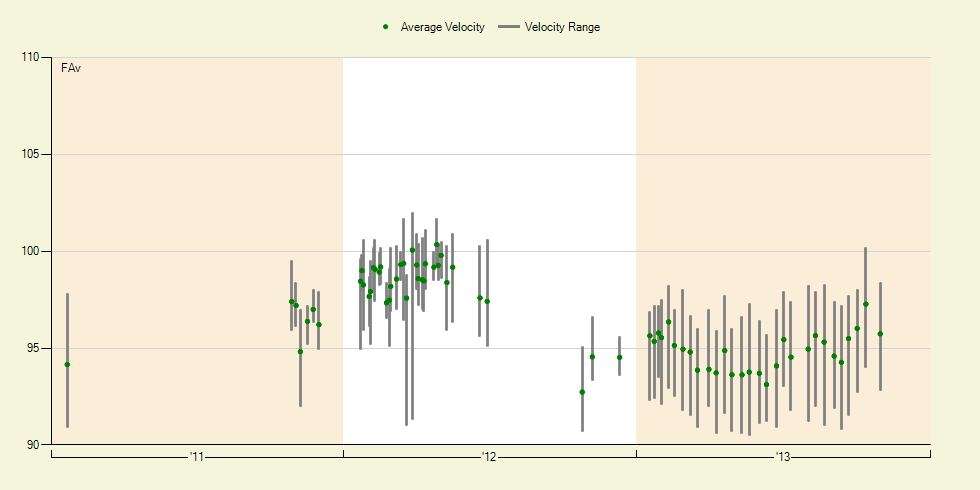 That's amazing, discouraging, and progressively more encouraging with the span of a season. There was a point last year when Cashner was averaging 100 m.p.h.. That's obscene. But he was a Lamborghini driving through sand dunes, destined to break down. There was no way the velocity was going to last. And it went away.

Rizzo is younger, and he's a position player -- two points in his favor. But he's regressed. He's swinging at fewer bad pitches -- and fewer pitches in general -- but he's hitting just .229/.325/.420. When we took a look at the young first basemen on the rise, Brandon Belt, Justin Smoak, Eric Hosmer, and even Ike Davis got a mention. Rizzo was too far away for consideration.

He's only 24, though. And his plate discipline is improving. The power hasn't disappeared completely. The Cubs gave him a contract extension before he was close to arbitration.

As usual, it's probably more prudent to side with the position player. Cashner is 27 now, and he's thrown 270 innings in the majors. His minor-league statistics were good, but never dominant. The injury history is a little worrisome, even though the last one involved a hunting knife. Here's something to consider, though: What are you chasing when you make a trade like this? Rizzo has a much lower floor than a flamethrower with injury concerns, sure, but his ceiling might be as a good first baseman. No more, no less.

It's not the Erubiel Durazo Era, when everyone thought first basemen were cans of Billy Beer, cheap and easily available if you wanted to spend seven minutes on the search. Good first basemen are still hard to find. But, still, the ceiling Rizzo hints at right now isn't all that special.

Whereas Cashner is a raffle ticket for the ages. Triple-digit velocity and a wipeout slider, with a frame that's supposed to hold up to use? That's a good package. That's a Cy Young package.

Nope. Still going with Rizzo. This is a game-show question. Do you want to keep the $50,000, or do you want to see what's in the box? I want the cash in hand. You might prefer the box.

Two seasons later, though, we're still talking about this. That means it was probably a pretty fair trade at the time, and it's not gotten lopsided with time. It's become even more of a stalemate. Give it a couple of years, though. Someone's gotta win this danged thing.

For more on the Cubs and Padres, please visit Bleed Cubbie Blue and Gaslamp Ball.

• Coming soon to a ballpark near year: Taking your shoes off (and maybe cavity searches!)

• Where have all the Indians fans gone?

• Second-guessing a baseball manager (who might be Ned Yost)