Top NBA offenses, shot creation and why it all works until it doesn't

The Hook revisits Creation Ratio in the context of the top three offenses in the NBA last season.

Share All sharing options for: Top NBA offenses, shot creation and why it all works until it doesn't

Two years ago, in the context of discussing Kevin Durant's potential for greatness (what a quaint argument!), I talked about Russell Westbrook's incredible commitment to creating shots. (All discussions end up getting to Westbrook eventually with me. Don't you dare ask about the weather.) Shot creation is a much disputed facet of basketball, but important for everyone interested in the game to investigate. It's one of the great remaining mysteries of the game: is it a skill? Is it more valuable than we ascertain? Is it not valuable at all?

A regular column on the NBA.

9/16: Encouraging competitive teams
9/13: Rebuilding is a victimless crime
9/11: Horry's not a Hall of Famer
9/9: On 'making your teammates better'

Here's the theory, and my position on it: some players are superior at getting good looks at the basket for teammates and themselves. Be it through quickness and agility, excellent ball-handling skills, passing, aggressiveness, lack of conscience or, in most cases, some combination of all of the above, these players get off clean looks. Other players, due to lack of the above attributes, create less frequently. Of those, some may rely on a creator to set up the shot.

So in a properly Westbrookian example, consider the No. 2 and No. 4 scorer for the Thunder last season: Russ and Serge Ibaka. Westbrook was, when we checked in 2011, the No. 1 creator in the NBA. I didn't run the whole league this time around, but I suspect it to remain true: he created about 25 shots per 36 minutes last season. (Check the old post, linked above, for methodology, warnings and caveats about why we have to estimate a couple of inputs.) Westbrook averaged about 29 total shots and assists per 36 minutes -- a huge majority of those were created by himself.

Ibaka, meanwhile, isn't much of a creator, despite scoring 13 points per game. He created an estimated four shots per 36 minutes while using about 12. The majority of Ibaka's shots are created by someone else. (Westbrook, usually.) Here's what the chart looks like for Oklahoma City last season, including everyone who played at least 800 minutes. Note that instead of representing Creation Ratio as [created shots / uncreated shots], we're using the percentage-based [created shots / {created shots + uncreated shots}]. 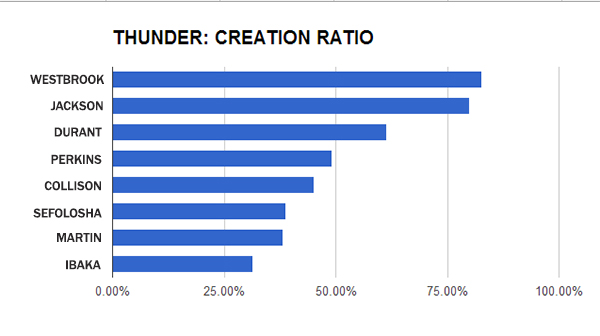 About 83 percent of Westbrook's total shots are created by ... Westbrook. Ibaka's creation ratio is 32 percent, the lowest on the team. Also note that Durant, though more likely to hunt his own game than he was in the past, has a creation ratio of 61 percent. He depends on Westbrook's passing, whether he likes it or not. (I trust that he likes it.)

Let's now compare Durant's situation to that fella who keeps beating him for the MVP trophy.

LeBron James is almost Miami's Westbrook. Almost ... because Dwyane Wade is also pretty Westbrookian. LeBron created 19 shots per 36 minutes, and Wade's at about 17. That's 72 and 68 percent of the shots used by each player, respectively. Miami had the No. 2 offense in the league last season, just behind Oklahoma City. What's striking about the shape of the roster's creation ratios is that there is a strong set of creators and a strong set of users. Outside of James, Wade and the two point guards, everyone else on the Heat is well below 50 percent. Shane Battier is hilariously low in terms of creation: he creates an estimated 1.9 shots per 36 minutes.

But Miami and Oklahoma City are relatively similar: there are 3-4 major creators, and everyone else largely relies on those guys to do most of the shooting and setting-up. The No. 3 offense in the league last season, which belonged to the New York Knicks, was not at all similar. 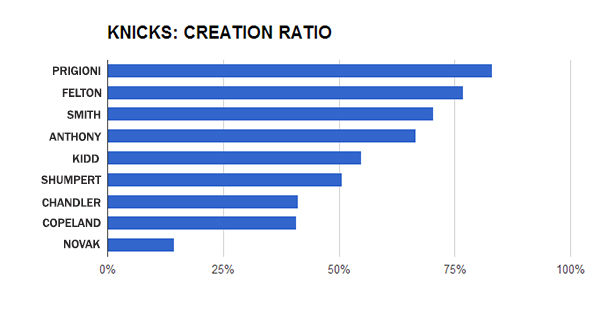 On the Knicks, everyone creates shots. Usually their own, except in the cases of the point guards, who create both their own shots and a few for the others. Pablo Prigioni was basically New York's Westbrook, though less prolific on a per-minute basis (11 created shots per 36). He didn't use much help at all, despite being featured in quite a few two-PG lineups. Raymond Felton (15.6 created shots per 36) was similar: lots of creation, little use. Following the two PGs, you have freelance artist extraordinaire J.R. Smith and NBA scoring king Carmelo Anthony, who star in shot creation despite racking up hilariously few assists. ('Melo created 18 shots per 36 minutes. Only 2.5 of those were assists for teammates.)

But it doesn't stop there: Jason Kidd and Iman Shumpert had creation ratios above 50 percent, too. And despite reputations as offensive roleplayers, Tyson Chandler and Chris Copeland hunted a good share of their own food, too: each came in at 41 percent creation ratios, seemingly high given their roles and the numbers Ibaka, Battier and Udonis Haslem put up. The lone ranger as a major user and anti-creator on the Knicks last season was Steve Novak, who created a whopping 1.5 shots per 36 minutes while using roughly 8.5.

Now, why does any of this matter? Studies have indicated that assisted shots are more likely to be converted than unassisted shots, and the difference may be huge. That swings both ways for creators: creating shots for teammates means those teammates will shoot more efficiently, but creating a bunch of shots for themselves reduces the likely conversion rate.

But an assist is not always there. For the Thunder, is it better, lacking other options, for Westbrook or Durant to create a shot for themselves than to let Ibaka or Kendrick Perkins do it? By looking closely at creation rates and field goal percentage, we can start to figure out some of those answers.

The 2013 playoffs provided one big clue when Westbrook went down with an injury. Ibaka and Kevin Martin (another taker) suddenly became a lot more responsible for hunting their own shots ... and their efficiency tanked completely. Ibaka shot .573 in the regular season as a user, and .437 in the playoffs as a creator. (It's not as clean as it looks, because one of those playoff series was against Memphis, a top defense. But the numbers were that dramatic in the first round against Houston's sub-par defense as well.)

The other clue from the postseason: when the Knicks came up against Indiana's stout, active defense, the offense fell apart. All those guys used to freelancing for their own shots started struggling mightily and there was nothing to fall back on. The popular concept is that when you have creators, you can just give them the ball when things get tight and they will know what to do. The Knicks creators had no clue what to do against Indiana and I suspect it's because most of them were used to going one-on-one to unfurl an attempt. When that didn't work, they just took worse shots. Roy Hibbert creates a helluva mess.

And I suspect that's what we'll eventually learn about shot creation as it pertains to beating defenses: having more options is better as long as they are good options, and the best defenses are ones which disrupt the creation chain, either by smothering the creator or forcing the user into uncomfortable situations. Perhaps that's the next frontier of shot creation research: looking at what, defensively, makes them go upside-down.

• The argument for putting Robert Horry in the HOF