The Millville Meteor isn't just matching his 2012. He's improving upon it.

Share All sharing options for: Mike Trout's obscene second half

A relevant comic to today's topic:

Today's topic is young players. Because when they're successful early, it's easy to start extrapolating. Let's take Tim Lincecum. After his first full season, it made sense to do something like this: 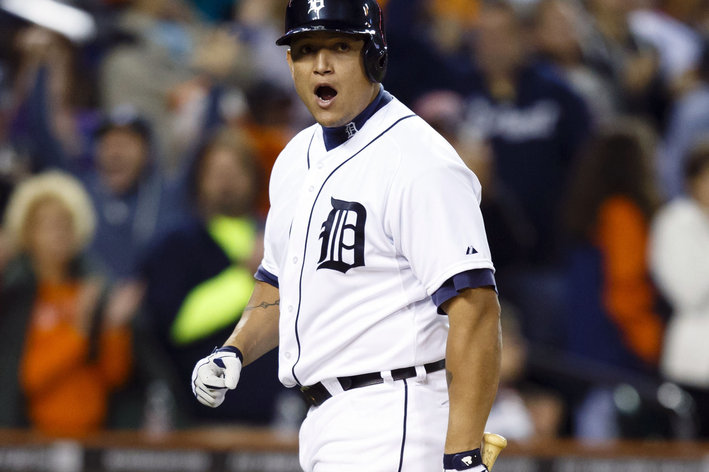 Kurt Mensching wonders if Cabrera's poor September has opened the door for Chris Davis and Mike Trout to win the award.

This is why I was expecting Mike Trout to take a step back in 2013. This is why I'm a moron.

In case you haven't heard, Mike Trout is a better hitter this year. The defensive statistics are being turtlenecked contrarians, so his WAR isn't quite as obscene. But it's still obscene. And Mike Trout is even better. This shouldn't be that much of a surprise if you're extrapolating. If a guy's good at 20, he's probably going to be even better at 21. But Mike Trout was already so good. He was already as good as hitters get, generally. Ted Williams hit .406 when he was 22. He didn't hit .416 when he was 23.

And when you'd extrapolate how Trout could get better, you had two ways: walks or power. It was possible for Trout to improve on his power numbers, sure, but that seems more like something you expect from a player in his middle 20s, not his early 20s. Which left his walks. Could a young player figure out the secret of plate discipline so easily? Doesn't he have to climb a mountain and ask Rickey Henderson three questions, or something?

Nope. He's just going to do it if that's okay with everyone else. And if it seems like it snuck up on us, that's because it kind of did. Here's the secret of Trout's OBP success:

"I believe I speak for the entire human race when I say, 'Holy ****,'" said Oceanographic Institute director Dr. James Aoki, noting that the dolphin has a cranial capacity 40 percent greater than that of humans. "That's it for us monkeys."

Indeed. Now that Mike Trout has decided to wait for his pitch, the rest of us should probably just dig a hole in the sand and bury ourselves.

Here's a list of players at, above, or close to a .500 OBP in a half-season. Lots of the usual suspects, of course. Bonds, Williams, Ruth. Really, only two names jump out over the .500 mark: Ryan Howard and Roy Cullenbine. The former is probably part of a dream I'll forget when I wake up. The latter is a Baseball-Reference.com page worthy enough of its own feature in the offseason. The 40 other seasons, though, were mostly turned in by inner-circle Hall of Famers. Most of them inner-inner-circle Hall of Famers.

Think about the adulation a 21-year-old prospect would get if he put up a .500 OBP in Double-A over a half-season. Think what everyone would say if that prospect could also run, field, and hit for power. Baseball America would release issues with tri-folds in the middle.

You didn't wake up this morning thinking you needed to know just how good Mike Trout was, and you probably won't go to bed thinking about how much better Mike Trout is this year. But he's better. He had good plate discipline last year. He leads the American League in walks this year. Next comes the power. He's already at the top of the distance leaderboard. After that comes the taunting. After that comes the demand for human sacrifice. We'll deal with those as they come.

Right now, though, Mike Trout is having a good season, everyone. Please make a note for your records.

• A night in the life of Yasiel Puig