On the Dodgers swimming in the Diamondbacks' pool ...

Share All sharing options for: On the Dodgers swimming in the Diamondbacks' pool ...

I mentioned I was going to write about the Dodgers violating an unwritten rule by jumping into the Diamondbacks' pool after winning the NL West, and a co-worker asked, "Is that really an unwritten rule?"

What kind of question is ...

The first thing I'd like to rebuff is the idea that everything is fair game during a celebration. "C'mon, it's just a bunch of players having fun. What's the harm?" There's nothing wrong with that sentiment, I guess, but let's dig into the reductio ad absurdum and find a legitimately obnoxious scenario. What about a player dry-humping the apple in Citi Field? What about a player emerging from the fish tank behind home plate with a clownfish between his teeth? Yasiel Puig putting lipstick on the Willie Mays statue?

Nothing there is close to taking a dip in Chase Field's pool, sure, but I don't think this topic is out of bounds. The Diamondbacks have a notable landmark in their home stadium. Their rivals used that landmark as a prop with which to celebrate. The rivals were upset. It follows that unwritten rules were written and then violated. It's our job to take a look.

And, boy, those rivals were upset.

"I'll give credit where credit's due. They won the division, so congratulations to them. I would expect someone to act with a little more class. I highly doubt the New York Yankees would do something like that."

"I could call it disrespectful and classless, but they don't have a beautiful pool at their old park and must have really wanted to see what one was like."

"Hi, it's Derrick. From earlier? Could you add the hash tag #sickburn to that last quote I gave you? Thanks. We're trying to get it #trending."

That last blockquote isn't real, but a grown man really said, "They don't have a beautiful pool at their old park," so it evens out.

Before we get into what the Dodgers did, it's probably best to give a little background. First, the Dodgers and Diamondbacks had some tussles this year. There was a game in June you might remember. This history plays a part.

But a small part. There are two things that mean more to me than the fight, and I'd reckon mean more to the Dodgers, too. The first is that fans who sit behind home plate at Chase Field can't wear the paraphernalia of the opposing team. The Diamondbacks actually give the fans an ultimatum. Sit there with Diamondbacks gear, or don't sit there. It wasn't just an isolated incident, either. They did it for a Giants game later that month.

Second, the Diamondbacks actually asked the Dodgers not to celebrate on the field after winning the division. That was apparently something that someone thought was a good idea. I picture a scrunchy-face person with a southern accent, punctuating every other sentence with a "y'all." If it isn't too much trouble. If y'all don't mind. If you could respect our wishes. If y'all could keep it to the clubhouse.

The Diamondbacks are the Mark Zuckerberg character in The Social Network. They can't even enjoy their relative successes. They have to explode an insecurity bomb and send insecurity shrapnel everywhere. Can you not celebrate on the ... can you not ... look, baseball is a game, but that cuts both ways. Don't take the defeat so danged seriously if you're an organization. Fans, sure. Wear it on your sleeves. But the team?

Now that we have the background, we can turn our attention to the Dodgers. Who are arrrrrooooogaaaaant. The whole organization. They got out of a gold Maserati before the season started, popped their collars, and made the fake-gun motion and "kkck-ckkk" sound to a girl who was clearly with her boyfriend. Now they have the girl, and they have a new Maserati after wrecking the old one. Yasiel Puig isn't an arrogant anomaly, he's a case study. The Dodgers expected to win the division, and they did. When they did, they did it in the most arrogant way possible.

Please, take a moment to stop the "what players can't have fun" defense and acknowledge that what the Dodgers did was, in the words of Foucault, "kind of a dick move." There were a lot of ways to celebrate. There was one way to celebrate that was like a 16-year-old teabagging a fallen opponent in Black Ops II.

The Diamondbacks can be whiny twits and the Dodgers can be arrogant jackfaces at the same time. Please, let's stop the fussin' and the feudin' and agree that everyone is wrong and horrible.

And also agree that if it was your team, you'd probably be giggling at this very moment. Because what's the point of being a sports fan if there isn't any schadenfreude? It's all hilarious until it's happening to you.

On a scale of the Boston Red Sox standing and applauding Mariano Rivera (1) -- oh, look at those good, humble fans, what with their proper sense of perspective -- to a team that acts like this after an important home run (10), the Dodgers are at a 6. Could be better. Could be more respectful. Probably not the end of the world.

And, really, they don't have a beautiful pool at their old park.

Update: Because I want everyone to get along, I've made a sign for the Diamondbacks to hang by their pool: 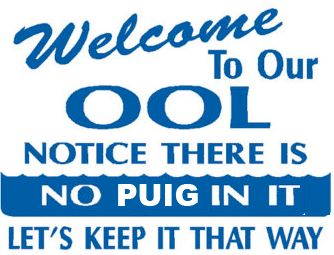 Now there should be no confusion, as everything would be clearly marked. Thank you.

For more on the Dodgers, please visit True Blue LA

For more on the Diamondbacks, please visit AZ Snakepit

• A night in the life of Yasiel Puig