SportVU, Synergy and how we use fancy new data

With all this new data, it'd be nice if we avoided the trap of simply rankings players constantly. Plus, Milwaukee's lack of arena urgency and the Wizards' crushing blow.

Share All sharing options for: SportVU, Synergy and how we use fancy new data

A few weeks ago, Grantland's Zach Lowe broke the news: every arena in the NBA will have the SportVU, the high-tech game tracking system that 15 NBA teams used last season. The NBA will give the public access to the data the cameras pull via broadcasts and NBA.com. Lowe and NBA.com's excellent John Schuhmann have since wrote about what fans and teams get out of this.

It's clear that this is an information gamechanger: so many questions we've wanted answered for years will be able to be addressed by the data. So, a word of caution that also applies to the video indexing and data service Synergy, the current belle of the basketbloggers' ball: let's use this new trove of information for more than just ranking players.

A regular column on the NBA.
9/18: Shot creation among top offenses
9/16: Encouraging competitive teams
9/13: Rebuilding is a victimless crime
9/11: Horry's not a Hall of Famer

Unfortunately, too many fans get caught up in that game repeatedly, even with Synergy. What does "Brook Lopez is No. 116 in post defense" even mean? It's an easy hook, and comparing two players in a way that cuts the grain -- say, Isaiah Thomas and Kyrie Irving -- will always be a popular topic. But this data can challenge generations-old tropes, test what we believe to be common sense, help us find and fill holes in our understanding of the game. At the end of the day, if all we use SportVU for is to figure out how bad Kobe Bryant is at team defense, it'll be a waste of the treasure we're being given. (That said, the first thing I'm looking into is Kobe's team defense.)

I, for one, am as excited about the promised potential assist data as anything else. This has been a concrete, discussed need for years. Right now, the box score and play-by-play only tells us when an assist is made. That requires a made shot. If an assist would have led to a basket if the shooter didn't miss, that currently remains totally unknown ... unless you set up a laborious game-tracking project, like Bullets Forever did with its infamous John Wall Missed Assist Tracker in the lockout-shortened 2011-12 season. Having leaguewide data on potential assists and, Lord pinch me, free throw assists will allow us to investigate the real value of assists, a perennial thorn in analytics' side. It'd be a shame if most of the energy around the data instead went toward arguing about who is better between Chris Paul, Deron Williams and Derrick Rose.

So, again, this is a plea to spend time looking for broad answers in the data instead of arguing Player A over Player B. It's time for the NBA's stats breakthrough(s). 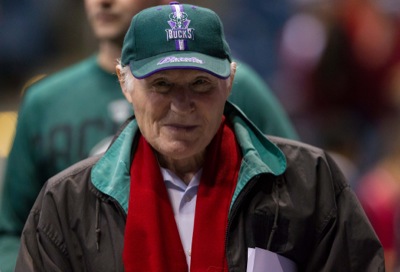 A summary of why the Bucks are in this position.

So Silver fired off the opening salvo in the public debate over public financing of a new NBA arena in Milwaukee by saying that the BMO Harris Bradley Center (The BMOHBC, what a lovely moniker! ::throws up::) is not suitable for NBA basketball. Specifically, he said that The BMOHBC is a couple hundred thousand square feet too small to offer the amenities of other facilities.

To be clear, this statement is meant to spark up the conversation in Milwaukee. The civic leadership in the area seems to be hesitant to support public financing, especially after the swing vote to offer money to the Brewers' Miller Park in the mid-90s got recalled from office. But there are certainly people in the city who want to keep the Bucks, and chances are many of those people are in powerful positions. Silver's talk was aimed at them, and his intent is to get them alarmed and in action.

Will it work? In Sacramento, things happened because of a threat that had arrived. The city's plan sprung from the Maloofs' attempt to move the Kings to Anaheim. After the Maloofs sandbagged that deal, the next city plan sprung from the Maloofs' attempt to sell the Kings to a Seattle group. By that point, for many in the community, supporting the arena plan was as much about protecting the city from raiders from the North as it was for economic reasons.

That imminent threat doesn't exist in Milwaukee, so I fear (for the city's sake) that Silver's implicit warnings won't be heeded. The good news is that there are no Maloofs involved in the Bucks' situation, which upgrades the opportunity for a sensible solution lacking drama by 2,000 percent. In addition, Herb Kohl, the owner of the team, is believable when he says he'll work to keep the Bucks in Milwaukee. I sense there's a limit to that dedication -- at some point, without a new gym or hope for one, it becomes untenable -- but surely Bucks fans trust Kohl to do the right thing.

Regardless, it's not a fun situation. It's a pretty grimy side of the NBA, the arena game. But the NBA finds it necessary to remain involved with, so here we are. (As I say that, I should express how grateful I am that the NBA remained engaged in the Sacramento project for years and years. It saved pro sports in my town.)

Just like that, the Wizards' playoff dreams take a huge blow. Emeka Okafor is a major piece of Washington's big three, with John Wall and Nene. He's the best defender on the team and a steady presence on the floor. And he's out indefinitely with a herniated disk. So much of the hype around the Wizards heading into the season has been built on two things: how good they were when all three big names were healthy last season, and how good the defense was. Welp and welp. (Keep in mind that the Wizards likely needed increased contributions from Bradley Beal to get to the postseason anyway.)

More: How the Wiz can survive Young bigs must step up

The Wizards were expected (at least by me) to battle with the Bucks, Pistons, Raptors, Cavaliers and maaaaybe the Celtics for the final few playoff spots. (I think that the Heat, Pacers, Knicks, Bulls, Nets and Hawks are rather sure bets for the postseason. That leaves two spots for everyone else.) I might have picked the 'Zards for one of those spots, but not now. Not until one of the other teams loses a major cog for an extended period of time. So, uh, how's Andrew Bynum doing?

• The Celtics are (barely) under the luxury tax

• Comparing John Wall and Kyrie Irving: Past, present and future

• Deeks: The importance of emotion in early contract extensions