As EuroBasket has wrapped up, four spots remain up for grabs at the 2014 FIBA World Cup. The international governing body will pick these in coming months. Who will get the nod? Plus, The Hook considers Josh Childress's career arc and the Sass-ramento Kings.

Twenty teams have punched their tickets for the 2014 FIBA World Cup in Spain through regional qualification or special circumstance. Iran, the Philippines and South Korea will represent Asia. Angola, Egypt and Senegal will rep Africa. Australia and New Zealand are (surprise!) both in via the two-team Oceania region. The Americas dutifully submit Mexico, Puerto Rico, Argentina and the Dominican Republic, plus the United States, who qualified as the reigning Olympic champion. Europe's set includes host Spain, plus Croatia, France, Lithuania, Slovenia, Ukraine and Serbia.

A regular column on the NBA.
9/20: How we use fancy data
9/18: Shot creation among top offenses
9/16: Encouraging competitive teams
9/13: Rebuilding is a victimless crime
9/11: Horry's not a Hall of Famer

Four spots are left, and they'll be chosen by FIBA officials based on ... well, let's be honest, they'll be chosen first by who is willing to pay the organization's bribe entrance fee. Then FIBA will, in theory, suss out who will improve the tournament the most. In reality, who will deliver fans to Spain will likely matter more, but there are some other practical inputs to manage.

The only rule FIBA puts out there is that no more than three teams can be chosen from any one region. So, basically, that means Europe can't have four teams. (FIBA is a little pro-Europe, you see.) With all that said, here are The Hook's top contenders for those final four spots.

Brazil has really good talent, none of which showed up to the FIBA Americas tournament in August. The Brazilians were really, really bad in Caracas, but they've been good recently. They finished fifth in the 2012 Olympics, ninth in the 2010 World Championship, first in the 2009 FIBA Americas tourney and second in that same derby in 2011. They are ranked No. 9 in the world. This is a good team.

That said, the bigger reason FIBA will have is that Brazil is hosting the 2016 Olympics, and the basketball squad could use some positive momentum approaching that. FIBA didn't stick 2012 Olympic host Great Britain in the 2010 World Cup, but Brazil has a case on the merits, so this could be a big factor. There's also no question that Brazil has the dough to make it happen.

Russia is the best European team currently on the outside looking in. Ranked No. 6 in the world, Russia won bronze in London and finished seventh at the 2010 World Championship. Russia was disastrous at EuroBasket, but won that tournament in 2007 and got bronze in 2011. It also has a nice little youth movement brewing, having won bronze at the 2011 under-19 World Championship.

Russia was really, really bad in Ljubljana this month, but that's not the Russia we've come to expect. Plus, Russian basketball fans do travel a bit and they have the dough to get in the door.

China is ranked No. 11 in the world, and missed out on an automatic berth by tripping up in the early rounds of FIBA Asia last month. The exit landed rare World Cup berths for the Philippines and South Korea, but something tells me China will end up landing in Spain, even though Europe typically gets its max three spots. As we're always reminded: China is a massive flippin' market. Also, it happens to like basketball quite a bit. So despite China no longer being the top power in Asia -- Iran has a major claim to that spot -- the nation seems like a good bet for a wild card spot.

There are some really solid options for that fourth spot. If FIBA takes Brazil and China, it seems like No. 4 must be a European squad. But there's a compelling case to be made for another team from the Americas: Canada, which barely missed out on a bid this summer. In 2010, the three Euro wild cards were ranked Nos. 6, 7 and 17 heading into the tournament. (Germany, Lithuania and Russia, respectively.) The fourth was No. 24 Lebanon, which was suspiciously close to tournament site Turkey, geographically speaking. In 2006, the three Euro wild cards were Italy, Turkey and Serbia and Montenegro. The fourth was Puerto Rico.

Canada has an incredible young core starring Anthony Bennett, Tristan Thompson, Andrew Wiggins and Andrew Nicholson. Only two of those -- Thompson and Nicholson -- played this summer, and only the latter was a standout. But Steve Nash runs Canada basketball now, and Wiggins is a big fish. FIBA would love to get some of the coming Durant vs. Wiggins action, and getting that started in 2014 would be just lovely. In addition, with a full complement of players in Spain, Canada might actually do damage.

In Europe, the top competitors for a bid (other than Russia) are Turkey (No. 2 in the 2010 World Championship, but abysmal in all action since), Greece (No. 4 in the world) and Italy (just missed out on a World Cup bid, has four NBA players). The only other potential choices would be Germany (a longshot if Dirk Nowitzki doesn't commit early), Nigeria (No. 17 in the world) or Tunisia (African's rising star who fell flat in August). But I think it'll be Canada or Greece. And because I'm very excited about the team's potential, I'm rooting for Canada.

Josh Childress will attend the Wizards' training camp, which provides a good reminder that Josh Childress is still around. He played all of 100 minutes in the NBA last season with Brooklyn. He's gone from solid contributor and fringe Sixth Man of the Year candidate as a young player to a fringe role player by age 30. His career trajectory is just ... bizarre. 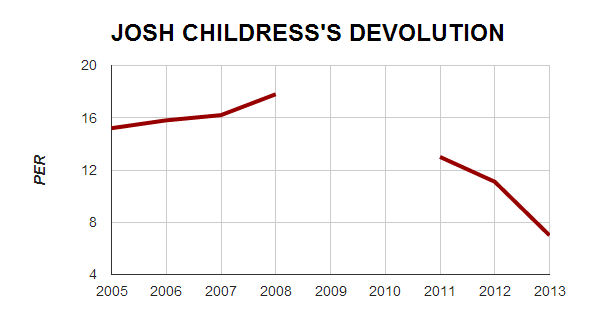 That two-year break wasn't an injury absence -- that was his two-year sojourn in Greece. He initially signed in Greece because he and the Hawks couldn't get a deal done during his restricted free agency. He spent a second year there after trying again to work out sign-and-trade deals with the Hawks. He finally returned to the NBA in 2011 as a 27-year-old, signed with the Suns, and began a fall to the fringe.

What caused it? Childress was always going to be a fit player, in my estimation. Where he fit in Atlanta, he did not in Phoenix. It's surprising, because we always think of Steve Nash making life easier for role players. But that wasn't the case for Childress and now he can barely get a job in the NBA.

Did something else happen to his game in Greece? Did the different training style over there hold back or even reverse his growth as a player? Or was the Atlanta Childress just a mirage of a prospect? It's quite a mystery. 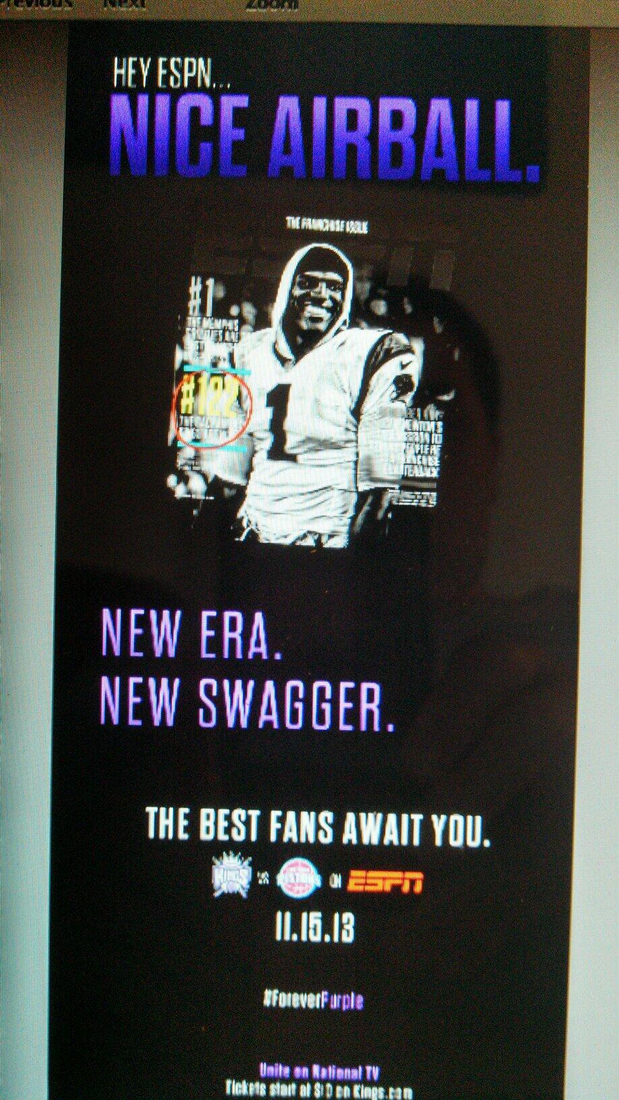 The Grizzlies landed atop ESPN The Magazine's annual Ultimate Team Rankings this year, which is a little stunning because the Grizzlies are the only pro franchise in relatively-small Memphis and you wouldn't think they could compete with the megaliths like the Lakers, Knicks, Yankees or any of the 32 NFL teams except for the Jaguars. But there they are, No. 1.

Another small-market NBA team didn't fare so well. ESPN's algorithms landed the Sacramento Kings at No. 122, also known as last place. (Behind even the Jaguars.) But the Kings have new ownership, plans for a new arena, a totally rebuilt front office and, I guess, a whole lot of sass.

Because the Kings are using that horrid ranking to promote the team's only game on ESPN this season. The full-pager at right appeared in Sunday's Sacramento Bee (shot via Ryan Yamamoto). The Kings play the Pistons on ESPN on Nov. 15 and are now selling tickets off of this injustice.

In truth, the ranking is totally fair. Before Vivek Ranadivé bought the Kings, this franchise was in horrendous shape. The front office was stale, the lottery streak was long, the fan value was nonexistent. This ranking isn't an insult to Kings fans: it's an accurate assessment of how the Maloofs treated Sacramento: with contempt.

But fans are all about pride, and this is a great opportunity to tap into that while making sure the building is full for a night in the spotlight. And ESPN doesn't mind: the talking points for the broadcast team has just been written. It can spend all night promoting ESPN The Magazine while talking about how the Kings' fortunes have changed. Talk about a virtuous cycle.

• The Bucks have an arena problem