All the Photoshops, GIFs, tweets, and internet ephemera from Week 3 in the NFL, featuring terrifying mascots, Jaguars ineptitude, and butts.

Close your eyes. Picture a human head. A humongous head -- bigger than any head ever recorded, a head the size of an exercise ball. Now imagine limbs sprouting out of the head.

This biological abomination is brought to you by the NFL:

The Oakland Raiders will be unveiling a new mascot. Here he is: The Raider Rusher pic.twitter.com/XERNYh6xMV

Darren Rovell is a soulless portal that corporations use to deliver their #strat to unwitting humans, and if the Raider Rusher is more terrifying than Rovell's usual sympathy for brands, that's because this has a face. A gigantic, grinning, hypnotically dead-eyed face.

Because everything that Rovell tweets is part of a larger brand strategy, the Raider Rusher is a character on NFL Rush Zone, the Nicktoons program designed to get children hooked on the NFL before they learn about the long-term effects of concussions. The cartoon has already been gazed at with incredulity by fine web outlets like SB Nation and Kissing Suzy Kolber, but if you're not familiar: in the NFL Rush Zone world, every NFL team has its own freakish mascot-head Rusher tasked with defending the Megacore located inside its respective stadium. Bad guys try to steal the Megacores, and so on. Also, "Rusher" is pluralized with a z. Please adjust your style manuals accordingly.

Anyhoo, let's break out the Photoshop and apply Rusher physiology to NFL humans: 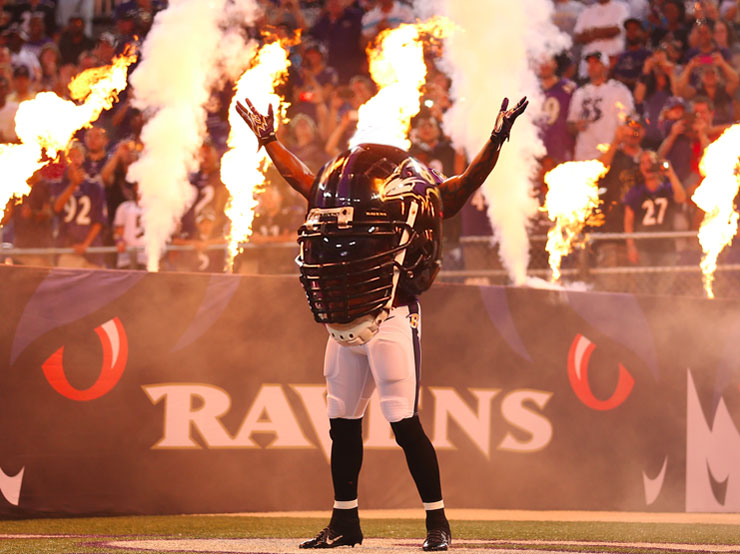 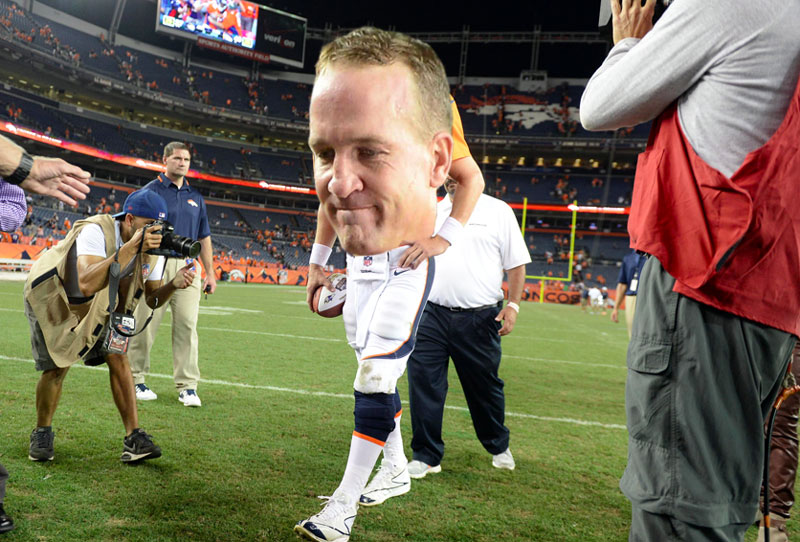 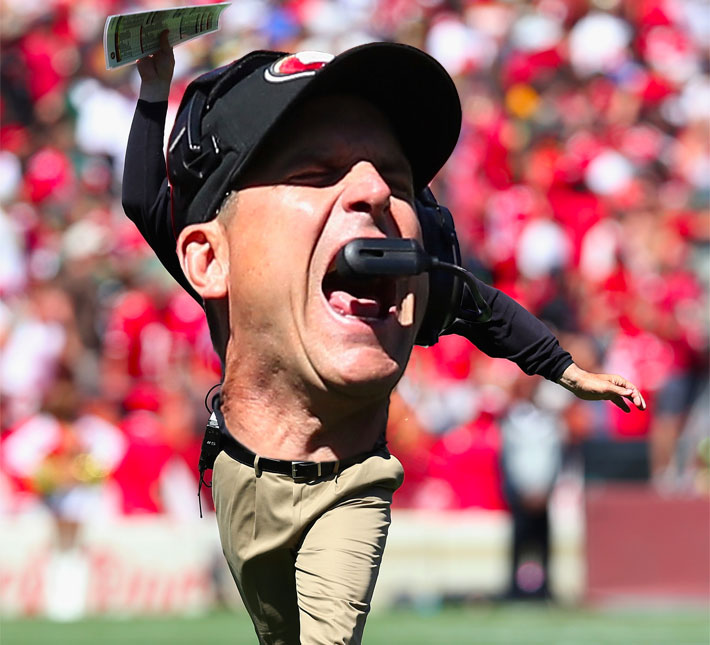 I don't even know what I'm doing here. None of these make sense, and this stupid idea is ruining my nonsensical football column. How could a head replace an entire torso? Is the skull completely filled with a giant brain, or is the brain smaller to allow room for the vital organs? THE BIOLOGY IS ALL WRONG.

I demand an audience with the persons responsible for Rusherz.

The immediate reaction to Matthew Stafford's reaction was "MORTIFIED PUNTER 2.0"

Must be a localized Michigan thing. As Mike Tunison noted at KSK, this isn't Stafford's first surprise snap fumble rodeo, either: he made the same face after fumbling a snap last year -- and threw a touchdown pass on the play.

So my daughter is laying here under me and just out the blue she says... I can't believe you lost to the Browns Daddy! Smh

"Out of the mouths of babes oft times come things that everyone else is also saying."

While it's easy to fault the Vikings for allowing Brian Hoyer to orchestrate a game-winning drive, we should also note that the Browns can mess ANYTHING up, even tanking. They traded away Trent Richardson, started the third-string quarterback, and STILL bumbled their way to a costly win in the draft position standings. 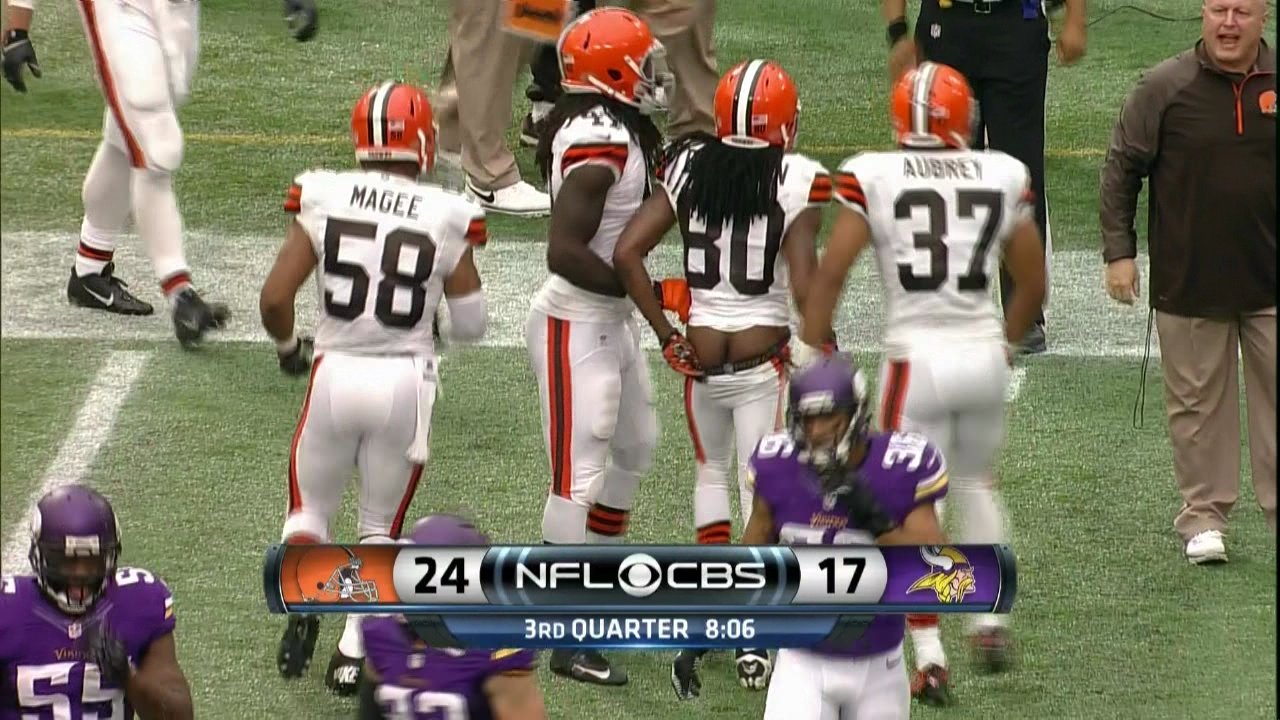 Those are the bare buttocks of Browns wideout Travis Benjamin. Even when Cleveland wins, it still shows its ass. (GIF here.) 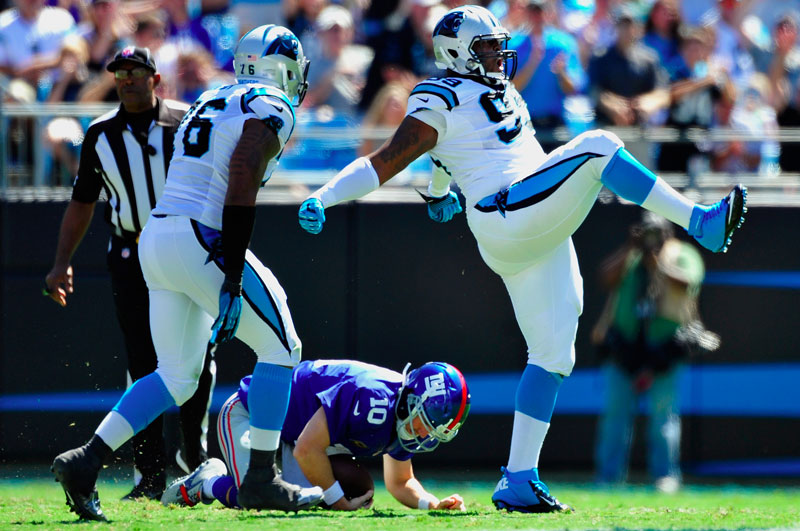 Despite the Panthers' 38-0 shellacking of the Giants that featured seven sacks and an interception, I didn't see any documented Manningface, so I made this video about how happy I am that the Giants are bad, because I'm a petty, hateful person who is fueled by the failures of others.

Joseph Fauria is my favorite undrafted rookie free agent. The nephew of former NFL tight end Christian Fauria has found the end zone twice in three games and has celebrated with GIF-worthy moments both times. The *NSYNC "Bye Bye Bye" dance above got more attention, but I prefer the pumping and thrusting of his Week 1 celebration. I guarantee that the phrase "fluid hips" is in his scouting report.

I don't care for these captions in the GIFs, by the way. It's not Christian's fault he played seven seasons for the Seahawks.

Field level. Behind #Jaguars bench... This guy. His sign... I maneuvered my way down to get this shot... pic.twitter.com/8h7FiUCWIq

At least Jacksonville's athletic department gets $500K from Seattle for this.

If 45-17 sounds oddly close, it only reveals just how low your expectations for the Jaguars are. Seattle won by four touchdowns -- covering the largest spread in the NFL in two years -- in a game where they pulled their starters in the third quarter. This is what happens when the worst team in the NFL starts its second-string quarterback against possibly the best team in the NFL with a notable home field advantage.

Once you're done cringing, take a moment to appreciate the Jaguar fan community, who roll through this existence with a mixture of pride and hope for the future, all with their sense of humor intact. I hope the team stays in Jacksonville. I hope they get Teddy Bridgewater AND Jadeveon Clowney. I hope Tim Tebow goes to live in a cave in Nepal. I hope the Jaguars become awesome, because you poor, crazy, and somewhat dangerous Jags fans deserve it.