Are fielders getting better and better?

Share All sharing options for: Are fielders getting better and better?

By now, you've probably heard that Andrelton Simmons has had, by a couple of metrics, the greatest defensive season in baseball history. That kind of absolutism makes me more than a little uncomfortable, especially because he's 0.2 dWAR ahead of Terry Turner's 1906 season, which seems like a rounding error divided by an abstraction. But the stat exists and, according to it, Simmons has been the best ever.

Actually, four of the top 25 dWAR seasons are happening right now, in 2013. Carlos Gomez's 2013 is #7 all time, Manny Machado's is #11, and Gerardo Parra's is #25. Those aren't fluky, Carlos Lee kind of defensive ratings, either. All four have been highlight-show mainstays throughout the entire season, consistently making some of the best defensive plays I can remember.

Still, it seems as if the best all-time defensive marks are weighted toward recent seasons. Tallying up the top-200 dWAR seasons of all-time and making a pretty bar graph:

The last bar is missing six years of data, mind you. The odds are pretty good that this decade will shatter the mark set last decade.

The dWAR metric is based on defensive runs saved, which are based on data collected only since 2003. The older numbers are based on the stats that were kept at the time, like assists, putouts, and innings played. So maybe it's not that players are getting better; maybe there's just more reliable date now.

But if the issue is data, you wouldn't expect to see a difference with the stats they've been keeping consistently since 1900, like errors. And as this Redditor points out, there have been fewer errors this season than in any other in baseball history. 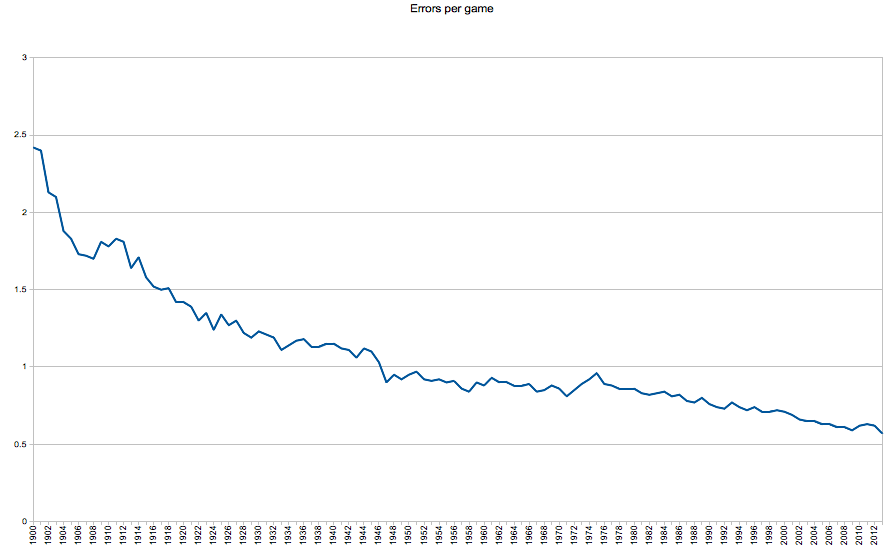 Some simple explanations out of the way:

There are certainly ways to explain away both of the above graphs. Logical, reasonable ways.

But let me play devil's advocate for a bit. We know that people are running faster and swimming faster. The gold medalists from 100 years ago wouldn't qualify as alternates in their sport today. This is an accepted truism.

Hitters are getting stronger and pitchers are throwing harder, but it's hard to see because they're continually negating each other. A .400 OBP meant something in 1940 and it means something today, even if the pitchers are throwing harder and striking out more batters today. It's going to be hard for hitters to get stronger and train better without pitchers catching up, and vice versa.

Fielders, though, aren't playing against anyone. At least, they're not in an isolated matchup like batters and pitchers. They're more akin to a track star racing against a stopwatch than a hitter going up against a pitcher.The fielder is rushing after an inanimate object that's been doing the same thing, more or less, for the last 110 years. If the reflexes and physical gifts of athletes are improving enough to allow sprinters to set new records with predictable frequency, why wouldn't that translate to quicker reflexes and reaction times for fielders?

If there's an area of baseball where we should expect players to get better, just like their counterparts in track, swimming, downhill skiing, long-distance running, et cetera, it would be fielding.

I lean toward the K-rate for the serious decline in errors and the data collection for the increase in standout defensive seasons. But maybe the default should be that fielders are getting better and better, and it's a trend that shouldn't even a question, like the progression of 400-meter records.

If you're complaining about the increase in strikeouts, though, remember that it's probably coming with a decrease in errors. That's a good thing. And maybe that decrease in errors is coming with constantly improving fielding, too. No sport likes to look longingly back at the olden days as much as baseball. But maybe we're in the middle of some of the best fielding the game has ever seen.