Managing your way into (or out of) a win

Share All sharing options for: Managing your way into (or out of) a win

If there was ever a time to ignore convention, this seemed like it.

Monday night the Royals and Mariners were all knotted in the bottom of the 10th inning, five runs apiece. The Mariners' leadoff man hit a double to the wall in right center, and wound up on third when Justin Maxwell played hot potato.

So it's man on third, nobody out, and the Royals' season essentially over if that man on third scores. Win the game, and stay three games off the pace in the wild-card standings. Three games is way too many, of course. But if you win out and both the Rangers and Indians struggle ... Hey, stranger things have happened. But fall four games out with only six to play, and even winning out isn't going to be enough.

So you gotta win, which means you just gotta hold that man at third base. Which is really hard. And might best be accomplished by summoning your best strikeout pitcher. Here are some guys that Ned Yost had in his bullpen, beginning with strikeout percentages this season:

Why did I include Wade Davis? Because of course that is who Ned Yost chose.

Two caveats. One, Yost has enjoyed great success choosing relievers for two seasons running. He deserves a great deal of credit for this. Two, Davis throws harder as a relief pitcher than as a starter. In fact, his career strikeout percentage as a reliever is actually 30 percent, right in line with Herrera and Coleman. Also, with the game in extra innings, it's easy to use him in the 11th inning if he can escape this terrible jam in the 10th.

I still think Yost was wrong. I still think that with the season on the line, you have to grasp for every statistical edge you can possibly find. And Holland's league-leading strikeout percentage is one hell of an edge.

But of course it wasn't a save situation, so of course Yost wouldn't use his closer.

And of course it worked out, thanks to one of the closest plays of the season. Davis did strike out the first batter he faced, but the second drove a flyner to medium-depth left field, where Alex Gordon made the catch. Gordon entered the game with 16 outfield assists, tops in the league. Absent his league-leading 17th assist, the Royals' season would essentially end ...

What happened? It's impossible to see in most (or all) of the replays, but it seems that Salvador Pérez snagged Gordon's peg and just nicked Kyle Seager's elbow before Seager touched the plate. Good throw, good slide, unbelievable swipe by Pérez. And Ned Yost looked like ... well, not exactly a genius. But very slightly better than he would have looked if Gordon and Pérez hadn't done it again.

So the game kept going, which gave the managers more time to flummox people like me. The Royals went down quickly in the top of the 12th, and Davis held the M's in the bottom of the 11th. In the top of the 12th, left-hander Lucas Luetge took the mound for Seattle. He walked Alex Gordon on four pitches. That brought up switch-hitter Emilio Bonifacio, with left-handed hitter Eric Hosmer on deck.

This time, the baseball gods frowned upon the mathematically challenged manager, and Pérez drove a double into the left-field corner. Gordon scored, Giavotella was out trying to score, and the Royals had the lead.

Oh, and those baseball gods? Greg Holland, with a save to be had, finally got into the game ... and the American League's premier closer walked the first two Mariners he faced. And somehow got out of it. With those two runners still glued to the first two bases, Holland threw a wicked full-count slider to Michael Saunders. It's the sixth and last pitch in this sequence: 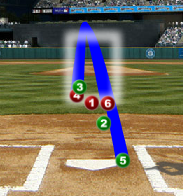 On television, it looked bad. It looked bad to Saunders, who cussed out plate umpire Vic Carapazza. But it was a good call. A tough call, but a good one. Afterward, Carapazza probably slept the sleep of the just. And on such things, the fortunes of entire franchises can rise and fall.