Think about that sentence for a bit. Let it roll back and forth between the sides of your skull. It's an if-it-wasn't-for-my-horse kind of statement, but it's true. If Cabrera doesn't win the Triple Crown, I'm thinking the Mike Trout brigade overwhelms the voters with their impassioned speed-'n'-defense rhetoric.

The thought of voting against a Triple Crown winner, though, was too much. The Triple Crown is kinda cool, you know. Admitting that is like admitting you still listen to the bands you listened to in high school. The Triple Crown is the Operation: Mindcrime of sports achievements, then. And even if you disagree with the premise that the Triple Crown should have been the deciding factor, at least it's sufficiently rare and impressive.

There's another weird-sounding declaration coming your way. It's similar to the Davis one in the first sentence. It's not going to make sense without a lot of context and background. But here goes:

If it wasn't for my horse …

No, those sentences are absurd, but here's the logic behind them: Scherzer has a shiny win-loss record, but it's not as shiny as it was on August 24, when he moved to 19-1. In the four starts since then, he's 1-2 with a 4.66 ERA. And his ERA is exactly 3.00 entering Wednesday's game. With six innings and two runs, his ERA stays at exactly 3.00.

That's not gonna do it. There's precedent in the Cy Young ballots of the past. Mike Scott was the only 20-game winner in 1989, and he finished second to Mark Davis, a reliever. Scott's ERA was over 3.00, and that was enough for voters to look past 20 wins.

Which is silly. But so are baseball awards in general, so we're already down one rabbit hole. And a slow-finishing Scherzer would have some competition for the Cy Young.

Hisashi Iwakuma has 13 wins for the Mariners, which is like 22 when you adjust for team. He also has a 2.76 ERA despite pitching in front of a miraculously clanky defense. He'll get some third-place votes, and maybe some second-place votes if Scherzer is over 3.00.

Yu Darvish leads the league in strikeouts, and he has to pitch in Arlington, which is playing like a neutral park this year for some reason, but it's a park that still means something when evaluating pitchers. He has the second-best adjusted ERA in the AL, behind Anibal Sanchez.

Chris Sale leads AL pitchers in WAR, which … means absolutely nothing. Not to the voters. You might get them to listen to your infomercial when it comes to Trout's WAR being based on speed and defense. But it means nothing when it comes to pitchers. And while voters are progressive enough to allow pitchers like Felix Hernandez and Tim Lincecum to win without gaudy totals, there's no way an 11-13 pitcher is going to get enough votes.

Sale really should have inspired Jeff Keppinger and Tyler Flowers to hit a little more, but that's a topic for another time ..

Those three are the longest of longshots, even if Scherzer gives up eight earned on Wednesday. But there is another. I might be crazy. I might be delusional. But six innings and two runs makes this your frontrunner: 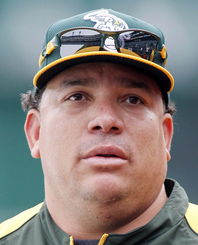 GAAAH. Sorry, didn't see you there, Bartolo Colon. But that would be your American League ERA winner, most likely. He's 17-6 for a team that provides less run support than the Tigers. That's not a 20-game winner, mind you, but it's the guy with the ERA crown. And if Scherzer's ERA is, gasp, over 3.00, why ...

Counter to the counterpoint: Alright, that's a pretty good counterpoint. Writers do hold a grudge.

Maybe it's not close enough to make definitive statements, then. But with a bad outing from Scherzer on Wednesday, the AL Cy Young race gets interesting, at least. That isn't anything we expected in August.

For more on Scherzer and the Detroit Tigers, please visit Bless You Boys

• Looking for the next round of 40-year-old hurlers

• Is this a Golden Age of defense?