Paul George's next leap, the problem with jersey nicknames and Shaq in Sacramento

The Hook considers what Paul George needs to do to live up to his contract. Plus: the one massive problem with the NBA's planned nickname game and three thoughts on Shaquille O'Neal in Sacramento.

Share All sharing options for: Paul George's next leap, the problem with jersey nicknames and Shaq in Sacramento

Paul George landed his contract extension. The Pacers star didn't just sign for the maximum amount (roughly $80 million over five years), but reports suggest his contract is open to Rose Rule inflation. That is, if he makes the All-NBA team again in 2013-14, giving him two for his career, he will get the roughly $2.5 million-per-year kicker allowed for the league's brightest young stars under the collective bargaining agreement.

George is already really, really good: he made the All-Star Game as a 22-year-old and beat out some veteran stars for that third team All-NBA nod. Plus, his team is among the best in the league, having challenged the Heat to the hilt in each of the previous two seasons. George's stout defense and offensive versatility have been huge contributors to Indiana's rise.

A regular column on the NBA.
9/23: Who gets FIBA's Wild Card spots?
9/20: How we use fancy data
9/18: Shot creation among top offenses
9/16: Encouraging competitive teams
9/13: Rebuilding is a victimless crime

But because he's so good, the question is about how he can improve. He was the NBA's Most Improved Player last season, and in a rare stroke of serendipity for the award, he was actually the right candidate. Can he improve a good deal again, or are the Pacers going to be paying for the version they got last year? (Which, incidentally, would be fine. Have I yet mentioned he's really good?)

The one area where the Pacers could use more is an area where young scoring wings often improve as they age: scoring efficiency. George fell below league-average efficiency last season (.531 True Shooting) after one season at that level; his usage also grew from high-level role player (19.3 percent) to focal point (23.5 percent). (That inverse relationship between usage and efficiency always rears its head, doesn't it?). George will likely maintain that higher usage level through the next few years, so he'll need to find a way to make that 23.5-or-so percent of possessions he uses produce more points.

INDY CORNROWS: Pacers go all in on defense

Funnily enough, he's a scorer in the mold of Danny Granger: he has the physical tools to ride to the rim, but he shoots a lot of jumpers. George drew about 121 shooting fouls and took 363 shots at the rim last season, accounting for 484 shooting possessions. He took 573 three-pointers. Now, P.G. is a good deep shooter -- his 35.6 3-point percentage translates to an effective field goal percentage of .534, well better than league average for all shots. But George is fantastically athletic, a good finisher in the paint and an 80 percent free throw shooter. He picks up 1.068 points for every 3-pointer, 1.272 points for every shot at the rim and 1.6 points for every trip to the line. We're missing turnovers in this equation -- dribble-drives and receiving passes in the paint result in more, 3s result in fewer -- but that shouldn't make a significant difference. When you add in other jumpers, there's plenty of progress to make: George shot .360 on some 402 two-point jump shots.

The Pacers offense can get loads better, as it ranked just No. 20 in the NBA last season. A great start on that path -- and on George's promising career path -- would be to get the star wing become more of an attacker in the way Granger never really could. With Granger back to offer some perimeter expertise, that might be possible.

The mass hysteria over nicknames on jerseys given the circumstances is ... well, it's totally expected in the digital age. There's mass hysteria over every little thing. But the NBA's cute "nickname game" gimmick is seen as an experiment in personalized player jerseys, and so the traditionalists among us are right to voice our concerns.

I have just one concern, straight from the Immutable Rules Of Basketball Nicknames: the players can't pick their own nicknames, right?

This is one of the Basketball Gods' Commandments: thou shalt not dub thyself anything. Basketball nicknames are bestowed, not claimed. This is not rap music. This is not Twitter. Twitter handles? You can go ahead and claim those. Twitter is about the expression of self-identity: you post your most urgent thoughts under a personal brand you define and manage. (You are free to go throw up after reading that sentence.) 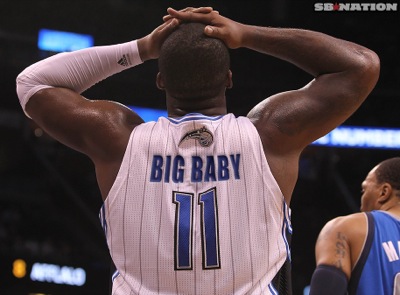 Basketball handles aren't like that. Dwyane Wade doesn't get to dub himself "Three." It's not happening. Not only does Wade's self-made "Three" moniker (which follows up the brilliantly bad "Way Of Wade," also self-made) violate the Basketball Gods' nickname commandment, it also violates the Shaq Edict, which I mentioned earlier this month: if Shaq gives you a nickname that is not latently homophobic, you must keep the nickname. Shaq dubbed Wade "Flash" early in their partnership; Wade lobbied to strip it. The Basketball World denied said request, just as they had denied Robert Horry's request to switch from the Shaq-bestowed "Big Shot Bob" to "Big Shot Rob." The commandment is absolute: you do not pick your nickname. Your contemporaries do. (Shaq has found a loophole through the Shaq Edict, which is how we got Big Aristotle and Big Shaqtus.)

So we have a problem if the NBA intends to allow its players to determine what nickname goes on the jerseys in this rumored Heat-Nets nickname game. I'm not worried about Kevin Garnett going with "KG" over "Big Ticket" because, well, everyone refers to him as KG anyway. Jason Terry as "JET" is just fine; Kenny Smith was not good enough to have his nickname retired and hung from the rafters. LLeBron James can go with "King James" -- though it was Nike-designed, it's gained common popular usage. "The Chosen One" would be a trickier sell. If Paul Pierce is anything other than the Shaq-bestowed "The Truth," we have a problem. (If only we could use the original, unedited version of the nickname: The M-----f---ing Truth. Alas.)

Wade is the problem, because he already attempts to flout the rules of nicknames. The NBA will likely leave it up to the teams and have some approval process. Nicknames that reference superheroes (like Flash) or otherwise violate trademark may get the ax anyway. (D.C. Comics would be dumb to raise a stink, but D.C. Comics has never been immune to dumb decisions. See: the most recent casting choice for Batman.) But if this experiment allows players to violate the nickname commandment, and specifically allows Wade to play with the word "Three" across his shoulders, it's a failure to the game.

The laws of the sport must be respected. Marketing is whatever, branding is fine. But don't let heretics rewrite the rules. Or else all of the commandments -- like "thou shalt not refuse to shoot a desperation heave at the end-of-quarter buzzer to protect your field goal percentage" and "thou shalt not yell in the ears of opposing shooters if you're on the bench" -- will be challenged. And we can't have that.

Three brief notes on the bizarre incredulity of being a Sacramentan welcoming Shaquille O'Neal to Kings ownership this week.

1. You would not believe how much this has invigorated the city's sporting circles since USA Today's Sam Amick broke the news Monday morning. Some people are mad, most people seem thrilled, but just about everyone, I would say, is still in full-on WHAT THE HELL?! mode. This shouldn't be a total shocker -- Shaq had mentioned his relationship with Kings co-owner Mark Mastrov in the recent past -- but it's still a total shocker. A week before training camp, and it feels as if the entire town is talking about the Kings. A team with the second longest active playoff drought in the league. So it's a win in that perspective: the franchise is getting tons of attention.

2. Shaq was a little insufferable during his last few years playing. He feuded with just about every former teammate and seemed grumpy. That all changed with his retirement news conference, and now he's clearly back to Peak Shaq: a walking laugh track. Just wonderfully funny, even when the jokes are at your expense.

3. In my opinion, the impact of Shaq on DeMarcus Cousins is totally overblown. For one, I don't think Shaq (who has a hand in about 2,000 businesses) is going to be around much. Shaq says he won't be working out with him on the court, showing him his moves. He'll be having conversations with Boogie. Maybe those will help. But if they do, I figure they'll help a fraction of the amount that Cousins' own self-awareness and hard work to change will. What's holding Cousins back is not a lack of pep talks and bull sessions. It's a lack of self-awareness about what he needs to do every day, and what he needs to never do. It's on Cousins -- not the voices in Cousins' ear -- to fix that.

• Who was the best prep-to-pros player ever?