Grading the unwritten rules: Carlos Gomez and the Braves

Share All sharing options for: Grading the unwritten rules: Carlos Gomez and the Braves

Here are the Braves: 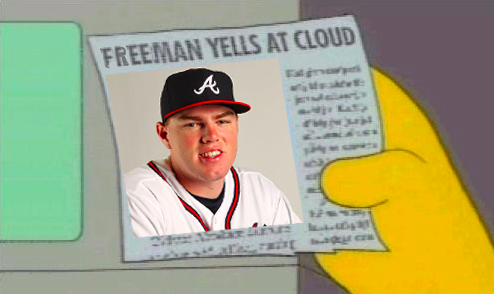 Just a bunch of crotchety old men with a stopwatch and a sneer, rattling their canes and yelling every time a batter takes 1.2 seconds to cross the imaginary Hank Aaron Line they've invented. The Braves just don't like fun. That's the …

Oh. Oh, yeah, that's kind of ridiculous. And then he chews at Maholm on his way to first. I'm Gandhi when it comes to this stuff, and I would at last consider winging one at Carlos Gomez's ass for that. That's at least a 70 ridiculous trot on the 20-to-80 scale.

There has to be a point where a home-run trot becomes too ridiculous. I'm all for a little watching. A little preening. A bat flip or two. When a player watched his home run against my team, I argued that my team was a bunch of fuddy-duddies. I grew up on Barry Bonds, and David Ortiz amuses me.

But there's a line, and I'm not sure where it is. If a player jumps on the umpire's back and rides him around the bases like a pony, everyone would agree that's too much. If the hitter stood on home plate and pantomimed sexual activities for a full minute -- I'm thinking like this, which probably isn't safe for work -- there wouldn't be a chorus of people saying, "OH, WHAT, A PLAYER CAN'T HAVE FUN AFTER HITTING A HOMER?" Everyone has a line in the sand.

That line can probably be calculated with a stopwatch, but how long a player takes with his trot isn't always the most important thing. When Bonds and Ortiz were at their worst, they were saying, "Loook at meeeeee!" They had deep psychic scars that manifested in an extra second to bask in the adulation. Those trots might violate unwritten rules, but they're pretty amusing if you're in the right mood.

Gomez wasn't thinking about Gomez, though. He was thinking about Paul Maholm. He was showing up Maholm and taking umbrage with a past hit-by-pitch. Intentionally slapping the cocktail napkin against the window and yelling, "Howdya like them apples?" before running the bases is in a different category from most homer-related hot-dogging.

That's a pretty innocuous HBP, though. Holding a grudge because of that for the next three months is rather odd. It was probably one of those things where Gomez played it over and over in his head until Maholm was actively flipping off the entire Brewers dugout.

Brewers partisans point out that you can hear various Braves yelling at Gomez before he says anything.

So Gomez gets a 9 on the unwritten scale for the trot, but there's something of an asterisk. He knew what he was doing, and that almost puts it in a different category. Even if it was a complete overreaction. If it means anything to you, Gomez spent most of the night apologizing on Twitter.

Now, Brian McCann gets a 10 because I've never seen a catcher physically prevent a runner from getting to home plate before. The unwritten rules unsay that you wait until Gomez comes up again and hit him with a spherical rock. I prefer the direct confrontation, to be honest. It's probably safer. But there's unwritten protocol: You wait and drill him with something that could seriously injure him like a normal player. Sheesh.

But maybe the Braves should sit the next one out altogether, you know? Loosen the tie, kick off the shoes, and just laugh the next time a guy makes a scene. They're starting to get a reputation, the fuddy-duddies.

• An anniversary for Satchel Paige

• Is Ibanez the new Griffey?