Let's journey to a fantastical world of barbarism, underhandedness, deceit, conflict and desire. Our first installment of a series about quarterbacks.

Share All sharing options for: Game of Throws: House Newton

Perhaps you're familiar with Game of Thrones, the popular HBO series based on George R.R. Martin's A Song of Ice and Fire fantasy novels. The universe depicted in Game of Thrones features warring kingdoms, made up of houses of proud families. Since we're all about sports here, we can't help but equate this with American football. Let's take a look at some of the most notable quarterbacks in the land and imagine what things would be like in Westeros. Please enjoy this first installment of Game of Throws. 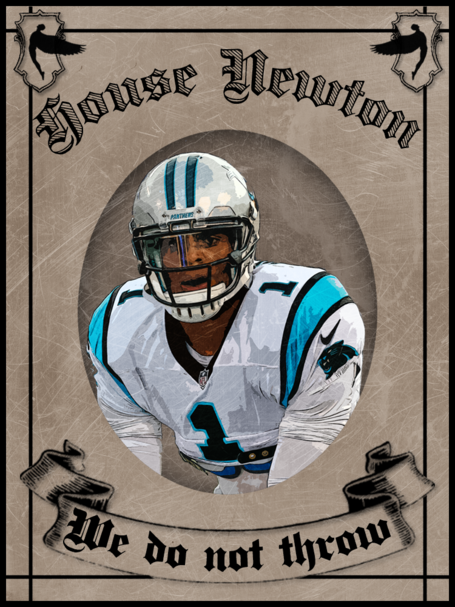 House Sigil: Their sigil is a flying man, ascending on a field of silver. This is to represent the speed by which House Newton overwhelms their foes.

House Words: Their house words are "We do not throw." This, again, is a reference to all the speediness. House Newton prides itself on its speed. They kind of won't shut up about it.

Location: House Newton's holdfast is Sprinter's Rock, which is located in the deep South of Westeros. You know; near Dorne! That makes Lord Cam a southron lord, which means that snooty Northerners have a tendency to underestimate or downright dismiss him. Hey, I don't write the books.

Overview: Fiercely loyal to the throne, House Newton does its best not to upset the balance of power. They try their hardest in one-on-one combat and can definitely hold their own on the battlefield. But despite the best efforts of the courageous and cunning Lord Cam, the remainder of House Newton maintains the status quo. Lord Cam can always be found in the thick of battle, rending his garments and screaming the house words, but ultimately, the members of House Newton lack the means to attain the crown. In meta terms: don't get too attached to House Newton, because they die in Book 3.

Fate: Pecked to death by Falcons. It's okay; it's not as painful as it sounds. Plus, they're used to it.