It's ... a less than spectacular run.

Share All sharing options for: Power-ranking the last 20 Angels trades

Since August 29, 2009, the Los Angeles Angels have made 20 trades. I'm not sure if that's a high number or a low number, but it seems like a lot. Assuming an average GM and an average team, you would assume that 10 of those trades would work out. Assuming an organization is run for four years by a fan who won a contest, you might assume that four or five of those trades would have worked out.

You assume too much.

With the help of Baseball-Reference.com's amazing trade engine, here are some power rankings for the last 20 Angels trades. If you have some sort of Net Nanny program running on your computer, please disable it now.

1. March 26, 2013: The Los Angeles Angels traded Vernon Wells to the New York Yankees for Exicardo Cayones and Kramer Sneed.
The best trade was an undoing of their worst trade. Wait, damn, spoilers. Well, cat's out of the bag. Getting a minor leaguer -- player, coach, mascot -- for Wells was a coup. Getting two is unfathomable. Neither one of them is doing a whole lot in the minors, but Cayones is young with an excellent name, and Sneed is reliably competent with an excellent name.

Easily the best trade of the last 20.

2. January 22, 2010: The Los Angeles Angels traded Gary Matthews and cash to the New York Mets for Brian Stokes.
Matthews was the original Wells. He was the EP that you like better than the best-selling album. He signed a big contract, and was busted for performance-enhancing drugs before playing a single game for the Angels. It was a silly contract to start with, and then almost immediately it seemed worse. Seems like that's some kind of record.

3. July 22, 2010: The Los Angeles Angels traded Sean O'Sullivan and Will Smith to the Kansas City Royals for Alberto Callaspo.
This one has a claim for the top spot, considering Callaspo was excellent for the Angels, but two things are going against it: First, Will Smith is doing some good things for the Royals, so the Angels gave up some value that could have helped them in 2013 and beyond. Second, the Angels gave Callaspo away for free just a few years earlier, so it's like they loaned him out and paid a price of Will Smith. That's like asking for Adidas and getting Zips.

4. March 27, 2013: The Tampa Bay Rays traded Dane De La Rosa to the Los Angeles Angels for Steve Geltz.
De La Rosa has been productive in the Angels' bullpen this season. Counterpoint: Geltz's year in Triple-A for the Rays might be more impressive. Take the current production in the hand over the future production in the bush, but this trade evaluation is still an incomplete.

5. May 3, 2012: The Los Angeles Angels traded Donn Roach and Alexi Amarista to the San Diego Padres for Ernesto Frieri.
Frieri went 26 innings as an Angel before allowing a run. He struck out 45, while walking 17. This trade looked like a steal.

Then Frieri's eyebrow fell off in the dugout one game. He picked it up and ran to the bathroom. Curious teammates followed him, and when they opened the bathroom door, all they found was Carlos Marmol and a makeup kit. No one ever spoke of what they saw.

6. July 30, 2013: The Los Angeles Angels traded Alberto Callaspo to the Oakland Athletics for Grant Green.
This looks like a solid return for a solid player. Green has a first-round pedigree, but with an up-and-down performance in the minors. This trade would rank higher, but I'm thinking the underrated Callaspo is the ultimate ceiling for a player like Green. The Angels traded a plus utility player for a guy with a small chance to replicate that career path. Most veteran-for-youngster trades are kind of like that, mind you.

7. December 3, 2011: The Los Angeles Angels traded Jeff Mathis to the Toronto Blue Jays for Brad Mills.
Addition by subtraction. Kind of. Because if this trade doesn't happen, the Angels don't make a trade that ranks even lower. If the Angels had Mathis still, their pitching would probably be better for the next few years, and we're not talking about framing or pitcher-whispering.

8. December 19, 2012: The Los Angeles Angels traded Kendrys Morales to the Seattle Mariners for Jason Vargas.
Baseball-Reference.com's WAR for both players this season: 2.2. Considering the Angels needed pitching a little more than hitting, this was a pretty decent allocation of resources.

9. June 25, 2013: The New York Mets traded Collin Cowgill to the Los Angeles Angels for Kyle Johnson
This trade has not actively harmed the Angels so far. That's the good news, and it puts it in the top-half of Angels' trades.

10. April 28, 2013: The Los Angeles Angels traded Chris Snyder to the Baltimore Orioles for Rob Delaney.
This trade has not actively harmed the Angels so far.

11. September 1, 2010: The Minnesota Twins traded a player to be named later to the Los Angeles Angels for Brian Fuentes. The Minnesota Twins sent Loek Van Mil to the Los Angeles Angels to complete the trade.
This trade has not actively harmed the Angels so far. And it put Fuentes on the A's eventually, which probably helped the Angels (and Rangers and Mariners) considerably.

As a mid-ranking break, here is Loek Van Mil congratulating a six-foot-tall man: 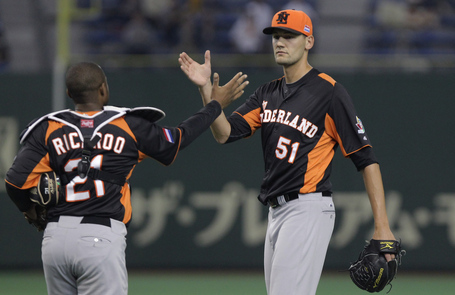 12. August 31, 2012: The Los Angeles Angels traded a player to be named later to the Arizona Diamondbacks for Barry Enright. The Los Angeles Angels sent Frazier Hall (August 31, 2012) to the Arizona Diamondbacks to complete the trade.
Hall has had a miserable year in the Diamondbacks' system, but Enright has been a full win under replacement for the Angels since 2012. He's pitched 12 innings for them. It's pretty hard to lose a full win in 12 innings, but Enright's kind of an astronaut, exploring new interstellar territory.

13. July 29, 2013: The Los Angeles Angels traded Scott Downs to the Atlanta Braves for Cory Rasmus.
Considering the teams looking for relief help, I refuse to believe this was the best return for one of the game's best LOOGYs. Rasmus is a live arm with a chance, don't get me wrong, so it's hard to completely pan the trade just yet. But it seemed curious, especially considering it came a full two days before the deadline.

14. October 31, 2012: The Kansas City Royals traded Brandon Sisk to the Los Angeles Angels for Ervin Santana and cash.
Oh, man, how this seemed like such a good deal at the time. You'll take on the whole contract, Royals? Okay, let me check with the owner. I'm definitely not about to muffle the phone and make comically high-pitched noises like I'm pretending to talk to someone. And then Santana was good. He was excellent. And the Angels spent the savings on Joe Blanton, who has been just about the worst pitcher in baseball.

15. November 30, 2012: The Los Angeles Angels traded Jordan Walden to the Atlanta Braves for Tommy Hanson.
The worst part is how some of these deals made so much sense at the time. You always trade a reliever for a starter with as much potential as Hanson. Always.

But every 10th time you do it, the reliever will turn into a super-reliever, and the starter will go kerflooey. This was the 10th time. If they brought their punch card, maybe they can turn it into a free sandwich.

16. August 29, 2009: The Los Angeles Angels traded a player to be named later, Matt Sweeney and Alex Torres to the Tampa Bay Rays for Scott Kazmir. The Los Angeles Angels sent Sean Rodriguez(September 1, 2009) to the Tampa Bay Rays to complete the trade.
It's not so much that Torres is good now, even though he is. It's that Kazmir was already broken. He was a crystal vase pushed out of the third-story window. And the Angels paid $20 million to figure this out. Even if they gave up movie passes, it would have been a bad trade at the time. Now Torres looks like a valuable bullpen piece.

Okay, so maybe this was the 10th time.

17. July 27, 2012: The Los Angeles Angels traded Ariel Pena, Johnny Hellweg, and Jean Segura to the Milwaukee Brewers for Zack Greinke.
Again, these rankings are based on hindsight. At the time, a win-now team trading prospects for a win-now pitcher made sense. But since then, Segura has made an All-Star team, and even if he's cooled down since his hot start, he still figures to be helping his team for the next five years. For a club like the Angels with a bottom-ranked farm system, Segura would have helped eased the pain of the dirigible-accident contracts over the next few seasons.

18. November 30, 2011: The Los Angeles Angels traded Tyler Chatwood to the Colorado Rockies for Chris Iannetta.
A questionable defender behind the plate, Iannetta went from the best hitter's park in the world to one of the worst. The results were entirely predictable. Iannetta is the same player, but now he's over 30 and achey. Chatwood is a top prospect having a breakout season for the Rockies.

19. July 31, 2010: The Los Angeles Angels traded a player to be named later, Patrick Corbin, Rafael Rodriguez and Joe Saunders to the Arizona Diamondbacks for Dan Haren. The Los Angeles Angels sent Tyler Skaggs (August 7, 2010) to the Arizona Diamondbacks to complete the trade.
It made sense at the time. Oh, how it made sense at the time. But three years later, this looks like one of the worst trades in recent memory. Corbin is already an All-Star, and Skaggs is still one of the better pitching prospects in the game.

Or, to put it in different terms, what does the Angels' 2013 look like if they'd refused to make a trade since 2009? Chatwood and Corbin in the rotation. Santana in the rotation. Skaggs as depth in the minors. Morales DH'ing with Pujols on the shelf. Walden closing games instead of Frieri. Will Smith setting him up. Segura at shortstop. Mathis at catcher. Forget about that last one. It would have been a much, much better team. Good enough to complete with the Rangers and A's? Not sure about that. But a better team.

20. January 21, 2011: The Los Angeles Angels traded Mike Napoli and Juan Rivera to the Toronto Blue Jays for Vernon Wells and cash.
One of the worst trades of the decade, if not the worst. There's no sense in rehashing it. But just look at it. LOOK AT IT. What was that all about?

It's not like the Angels have made 20 bad trades. But look at the positive deals. You have to do a lot of contextual framing to half-like the deals. Look at the negative deals. The names jump out at you.

These are all hindsight, which is 20/20. Baseball is hard. GM'ing is hard. There's no overarching point here except one: Damn, Angels. That is a bad run of trades, there.

For more Angels info, head over to Halos Heaven

• Grant Brisbee’s "Weekend on the Diamond"

• Eric Byrnes: There’s a steroids guy in the Hall of Fame