Cory Joseph needed time and guidance in order to make his mark as a pro. His NBA team was willing to make that investment.

TORONTO -- Wherever Cory Joseph looks, he sees them.

Every time he steps on the floor for Canada's national team, the San Antonio Spurs point guard shares the court with guys who believe they should be in the league, but aren't. Some were drafted. Others weren't. Some are hoping for another chance. Others never really had one.

It was the same in the D-League just over six months ago, in summer league in July.

If things had shaken out differently for Joseph, could he have been one of them? As a freshman at the University of Texas, he averaged 10 points and three assists per game before declaring for the 2011 draft. To some, that decision was shocking. When the Spurs selected him No. 29 overall, he wasn't seen as a sure thing.

Less than two years later, he'd play rotation minutes in the Finals, a credit to him and the team. San Antonio was the right situation, and he had the right attitude.

"For players in my position, you're waiting for your opportunity, waiting for the right timing, and then you just gotta be ready when your name's called," the 22-year-old Joseph said after a Team Canada practice last month. "That's the biggest thing. Do whatever you gotta do to stay ready, be professional about it and when your name's called, time to perform. Lights on."

With most of his Canadian teammates long gone after practice in Toronto, Joseph gets extra reps in on his floater, then on driving layups. In San Antonio it's the same story. Ever since he was a kid, he was willing to work. Joseph's parents, David and Connie, met as university basketball players and both became coaches. His older brother, Devoe, set an example as a high school star. Now Devoe plays professionally in the Ukraine and has two appearances with their hometown Toronto Raptors' summer league team on his resume.

While the Josephs are currently in Venezuela representing their country at the FIBA Americas Championship, growing up they'd play in the pouring rain in Pickering, ON. They'd shovel the driveway in the winter and shoot with gloves on. Sometimes their fierce one-on-one games would go on until they were ready to fight one another.

Inside the house, they'd fashion a hoop out of a coathanger, stick it in a door and shoot rolled-up socks into it. One day, Devoe backed Cory down and the younger brother tripped and crashed into the wall. When Connie got home, she found a Cory-sized hole in the wall. The boys told her that he tripped, but left out the part about the aggressive one-on-one makeshift basketball game.

"He always wanted to be better than his older brother," Devoe said. 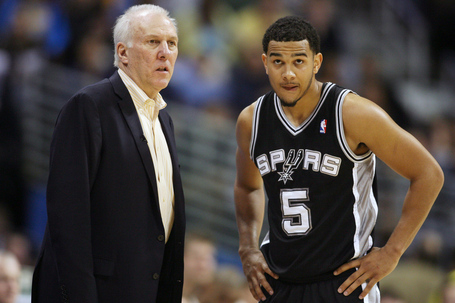 The younger Joseph said that he always had the confidence he could play in the NBA, but that doesn't mean the transition was easy. As a rookie in the lockout-shortened 2011-2012 season, there was no summer league. There was barely a training camp. With proven players in front of him in San Antonio, Joseph had to spend significant time with the Austin Toros in the NBA D-League.

Fellow Longhorn alum T.J. Ford played with Joseph in San Antonio before retiring and serving as a volunteer assistant coach in Austin. Ford mentored him in both spots, helping him stay positive when he wasn't getting the NBA playing time he desired.

"We're human. People assume that we're not supposed to be emotional about what happens on the court and off the court. It's not like that at all. I mean, we have emotions, you go up and down," Ford said in a telephone interview.

"Cory, yeah, did he get down on himself? Did he second guess himself? Yes. And that's why you gotta have a good support system to continue to keep you working. And that's what is great about the San Antonio Spurs organization. They keep guys mentally focused and they encourage you and they help you."

Ford describes Joseph as a great listener. He took in what NBA and D-League coaches said and observed the veterans and their habits. Ford showed him the importance of having consistent practice and gameday routines.

He thought he could just eat once a day and then go out and and perform at a high level-T.J. Ford on Cory Joseph

"That's the part he didn't understand," Ford said. "He thought he could just eat once a day and then go out and and perform at a high level."

Joseph approached every D-League game looking to prove himself. His job was to run the same offense he'd been practicing in San Antonio, and he wanted to show the organization that he was getting better and he'd always compete. The same was true months later in Las Vegas, where Joseph was named a summer league all-star.

"He came into the league at a very young age, he really wasn't ready and he wasn't an NBA player yet," Canadian senior men's national team general manager Steve Nash said. "He worked his butt off and he improved in his first year immensely."

Joseph started his second season an improved player, but it was the same situation. At the end of January, he'd only played 68 minutes for the Spurs. He'd been starring for the Toros, though, putting up big numbers and getting all the playing time he could handle. After a practice in San Antonio he called head coach Gregg Popovich and asked to be sent back to Austin. Joseph thought being on the floor in the D-League would be better for him than sitting on the end of an NBA bench.

A month later, Tony Parker got hurt and the Spurs recalled Joseph. Popovich threw him into the starting lineup, where he shot well, took care of the ball and played tough defense. He was stronger and smarter than the previous season and it showed.

"I was able to step in with confidence and do my thing," Joseph said.

Joseph was anxious and excited when the playoffs started, but the nerves subsided quickly. Playing on the game's biggest stage in the Finals is a learning experience like no other.

"You could watch, you could try to put yourself in that situation in scrimmage or whatever it is, but it's nothing like the intensity when you get to that game," Joseph said.

His performance in March convinced Popovich to trust Joseph in April, May and June. The effort he put in away from the spotlight prepared him for when the pressure was highest. With Team Canada, he's brought confidence back from San Antonio. 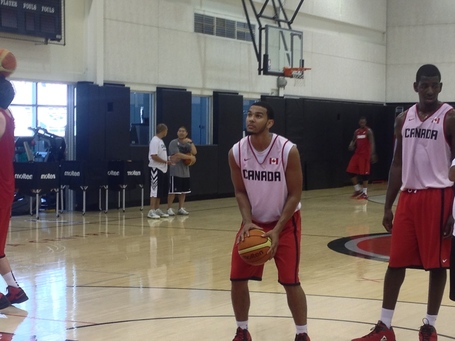 In four games in the preliminary round of the FIBA Americas in Caracas, Joseph averaged a team-high 16.5 points, 5.8 assists and 2.0 steals per game. Those marks are all top-5 in the tournament. He also averaged 6.5 rebounds, more than any other guard. More importantly, he's taken a leadership role despite being the youngest player on the roster.

"Last year he was quiet, two years ago he was like a church mouse," national team veteran Jermaine Anderson said. "And now he's come in and he's one of the loudest guys on our team. He's coming out of his shell and it's good to see."

There's no telling how far along Joseph would be if the Spurs didn't pick him. Another team might have given him more minutes in his first year, but that's no substitute for a winning environment and the postseason playing time he earned as a sophomore. Another organization might not have been able to provide the sort of guidance Joseph needed coming out of college.

They never skip a step, matter how much time it takes.-Cory Joseph on the Spurs

"They never skip a step, matter how much time it takes," Joseph said.

Carving out a niche in the NBA required patience from both Joseph and his team, and not every player is blessed with both. In Joseph's case, that patience has paid off.

• Ziller: Michael Beasley is the argument for incentive-based contracts