The Hook explores the latest Gladwell vs. Epstein disagreement on genetics in sports. Plus, a note on the death of basketball writing and a defense of hype.

Malcolm Gladwell, whose 10,000-Hour Rule* has been upset by Sports Illustrated scribe David Epstein's research for the book The Sports Gene, slid back into these tricky waters this week. In a New Yorker piece that cites Epstein's work without acknowledging that Epstein's work discredits one of the overriding themes of Gladwell's Outliers, Gladwell makes an argument that appears to compare blood doping and PEDs favorably to inherent, advantageous genetic traits.

Much of Epstein's work centers around how certain genes (and even genetic markers) heavily influence traits that decide whether a person will be a star athlete. One of the examples that Epstein discusses in the book is the Kalenjin tribe of Kenya. Studies have indicated that long and skinny legs are more efficient when it comes to long-distance running and the genes of the Kalenjin typically produce long and skinny legs. And what do you know? The Kalenjin are among the best long-distance runners in the world. There's also the impact of altitude: the Rift Valley of east Africa is in the perfect 6,000 to 8,000 feet above sea level range to boost red blood cell production, which allows more effective oxygen intake and is a big deal when you're running 5-minute miles for two hours.

This applies in the NBA, too. There are certain genetic traits that make it much more likely a given player will end up in the NBA, and once there will excel: height, hand size, leaping ability, cognitive ability, foot speed, body control, agility (arm and leg), endurance, strength, touch, etc. Epstein's argument -- and the vast research he cites -- suggests that genes are responsible for creating a class of potential star athletes. There's a reason sub-6-foot NBA stars are so rare. The sport at the highest level is not suited to sub-6-footers. It's suited to 7-footers who have those other traits (something that is also rare -- hand size and touch are a tricky combination, for example).

But Gladwell addresses the genetic differences that make humans individuals and sees a playing field tilted toward the genetically gifted. He then discussed cyclist Tyler Hamilton's autobiography, in which the doper defends the practice of medically inducing higher red blood cell counts and using EPO, a hormone that contributed to that same goal. Like those who defend the use of PEDs in sports like baseball, Hamilton argues that the drugs aren't magical potions. They just allow the competitors to train harder. They allow the athletes to get more out of the post-10,000 hours practice. And doesn't America fetishize practice?

Doping meant that cyclists finally could train as hard as they wanted. It was the means by which pudgy underdogs could compete with natural wonders. "People think doping is for lazy people who want to avoid hard work," Hamilton writes. For many riders, the opposite was true. [...]

It is a vision of sports in which the object of competition is to use science, intelligence, and sheer will to conquer natural difference. Hamilton and [Lance] Armstrong may simply be athletes who regard this kind of achievement as worthier than the gold medals of a man with the dumb luck to be born with a random genetic mutation.

What's unspoken is that this implication -- that doping is no different than being born with long, thin legs and a high red blood cell count -- totally ruins Gladwell's own 10,000-Hour Rule. Gladwell's Outliers argument was that only through a combination of innate talent (genetic traits) and incredible hard work do people excel.**

... the dumb luck to be born with a random genetic mutation ...

Instead of seeing doping, EPO, HGH and PEDs as shortcuts to the 10,000-Hour Rule, Gladwell (through his sporting avatars) presents them as salves for the inherent unfairness of human evolution. If doping can level the playing field, then it all only comes down to the dedicated training that for a couple of years now Gladwell has already heralded above all else as a determinant of excellence.

And in fact, based on the use of the phrase "dumb luck," Gladwell seems to argue that going the extra mile to risk your life with unnecessary and risky blood transfusions and drug injections in order to make more money and win more medals is somehow more honorable than being born in the Rift Valley. The East African's victory is due to 10,000 hours of practice and dumb luck. The doping cyclist's win is due to 10,000 hours of practice and the use of "science, intelligence and sheer will to conquer natural difference."

* It's obviously not Gladwell's 10,000-Hour Rule, but he is the de facto official spokesman for the theory.

** In his first response to Epstein, Gladwell argued that the 10,000-Hour Rule applies to cognitive tasks, not purely athletic ones.

In cognitively demanding fields, there are no naturals.

OUTSIDE THE BOX SCORE

[T]he use of advanced statistics is leading to a degradation in the overall quality of basketball writing. Especially among those that would traditionally be described as "bloggers", the movement towards empiricism has resulted in a reduction in creative forms of writing. There is more writing that serves to win an argument or be "right" about a point, and less writing designed to explore the unknown.

This is a problem in some circles. My biggest bugaboo at this point is neglect of sample size issues, or only token acknowledgement. (I have been guilty of that crime at times, eager to explain why something is or is not working.) Draper took heat for his position, but he has a bit of a point: there's less value in the online basketball community when it spends most of its time posting data blurbs from Basketball-Reference and NBA.com/stats vs. when it spends most of its time exploring not-so-arbitrary facets of the game.

At the same time, the counterbalance to stats-based analysis is narrative, and 90 percent of outsider-written narrative is bullshit. (So is a good portion of insider narrative. Remember what Quick said.) Me, I'm glad there's such a wide, diverse community producing the work now. There are a lot of folks relying mostly on stats analysis, yeah. But don't try to tell me numbers and words mix poorly. You've heard of Zach Lowe, right?

And there are also folks writing about every other facet of the game. The selection is enormous, especially compared to what it used to be. Back in the halcyon days of, say, 2005 or 2006, we got TrueHoop, Blog a Bull, Knickerblogger, CelticsBlog, FreeDarko, Detroit Bad Boys, Forum Blue & Gold and occasionally Deadspin. That was the bulk of the NBA "basketblogosphere." The number of venues is exponentially higher now. Some focus on numbers. Some focus on words. Some do both excellently and simultaneously. There's something for everyone, and that's great!

In addition, the intent of writers who focus on advanced stats or other newer "subgenres" like video breakdown are doing exactly what sportswriting has always been about: helping fans better understand the game. Beat writers do it by talking to players and coaches. Analysts do it by breaking down numbers or plays. Narrativists do it by exploring the human side. The heavy-on-analysis style is relatively new, and it's an evolution of sportswriting. Would Draper prefer the craft not evolve? I think not. Being aggravated that more energy is being put into the evolutionary tract you don't prefer is perhaps natural, but relatively meaningless.

Again, there's something for everyone, and the best solution to evolving the craft in another direction is to write stuff you want to read and promote others who do the same. If there's one thing the digital basketball writing realm has always excelled at, it's sharing divergent works.

Thursday's SB Nation NBA theme was Most Hyped, in which each blog on the network wrote about the player that came to their franchise with the most anticipation and there were some fantastic entries. Hype is such a wonderful thing because it's a jacked-up version of hope, which is what keeps fans of awful teams engaged throughout the year. I fear that is part of what's lost in the debate over the lottery and "tanking:" the lottery and getting those hyped draft picks really does help fans of awful teams stay in touch with the NBA. I just try to imagine suffering through the Kings' abysmal 2008-09 season without the hope for Blake Griffin and Ricky Rubio hovering over it all.

But so long as we're talking about hype, we need to talk about the greatest moment of hype in NBA history, from NBADraft.net in a time far, far gone. 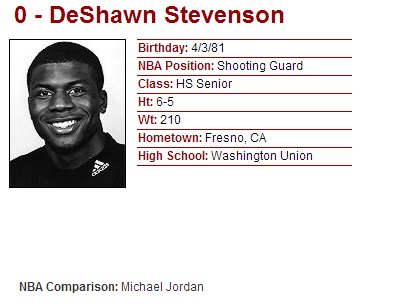 If that sort of hype is wrong, I don't want the alternative.