While I was digging through the news, videos and ephemera of the weekend of baseball, I was watching a recap of the day's NFL games. It was an hour-long program. I'm pretty caught up on the NFL.

But with baseball, that isn't going to work. You're not going to find out about the Phillie Phanatic getting dipsy-doodled by Justin Upton and Chris Johnson. And that's the kind of thing that's kind of mandatory if you want to feel really caught up with a weekend of baseball. So here's an attempt to fill in the blanks after a weekend of baseball.

Yusmeiro Petit was an out away from a perfect game

Here's how close Petit was to a perfect freaking game: 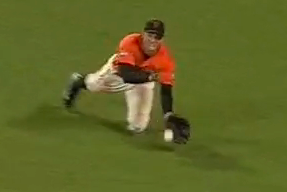 Underrated Pence face, if there is such a thing.

Everything about the at-bat was perfect. Petit made his pitches. Eric Chavez worked the count impeccably. The at-bat was solid, the ball was hard-hit, and Hunter Pence got a reasonable jump on the ball. There weren't a lot of woulda coulda shouldas. It was the Platonic ideal of how a perfect-game bid should end.

And it's worth remembering what kind of prospect Petit was:

He was the poster boy for scouts v. stats wars of the mid-'00s: the scouts claimed he didn't have the stuff to succeed in the majors, but the stats claimed he was a strikeout maestro in need of an opportunity. The scouts won, but they're fortunately nice enough not to bring it up every five seconds.

But for a night in September, Petit was the ace his stats suggested he'd be. His command was otherworldly and his curveball was a true swing-and-miss pitch. He threw 81 pitches to get to the ninth inning, a Madduxian rate. At no point did he look like a career minor-leaguer. He played the part of a supreme command specialist, like Bronson Arroyo, the old new Bartolo Colon, or a right-handed Mark Buehrle -- as if he'd been this good all along. And he's still just 29 so maybe he will be.

Probably not. But he'll have this game! Which could have been a heckuva lot cooler if Pence were two steps to his left. It was still anything more than anyone expected out of Petit from his post-prospect career.

The Cardinals swept the Pirates

That written, how do Cardinals fans really feel? Is there really a way to think, "YEAH, SUCK IT PIRATES, WHOOOO, YOUR TEAM SUCKS, EAT IT"? Or is it like the way a respectful subsistence hunter takes down game? "I'm so sorry. Thank you for the gift you have provided me and my family. I respect you. Thank you."

Probably the former. But that's because people are awful.

The Reds swept the Dodgers

And suddenly things are quite, quite interesting. If you're wondering what happens in the event of a three-way tie, we have you covered. Or you can look at the Cliff Notes:

That's what happens if there's a three-way tie in the Central. Root for it. Fear it. But root for it.

How did the Reds beat the vaunted Dodgers, who haven't lost four in a row since the advent of the talkie? One-run games. Two of them walk-offs. Clayton Kershaw allowed two homers to lefty-swinging Jay Bruce. That's not a sentence, that's a code that Cold War-era spies would use to confirm they were on the same side.

If the Reds weren't sure about their place in the topsy-turvy NL Central, how good does it feel to sweep the juggernaut Dodgers in a three-game series? In the recent past, getting outscored by five runs was a good thing for Dodgers opponents.

Instead, the Reds can say they stood toe-to-toe with one of the hottest teams in baseball history. They kept the Dodgers' offense down well enough, and their lineup did good things against the vaunted Dodgers pitching. It's right around here where we note that both teams are good teams, and are essentially evenly matched. But after watching the Dodgers win 51 out of their last 50, it's hard to shake that idea that they're unbeatable.

The Reds didn't care so much. Or at all, really.

The Red Sox didn't sweep the Yankees, but close enough

They took three of four, using a power-fueled comeback to stun the Yankees in their own park.

What it for sure means is that the Red Sox are almost certainly going to win the AL East. And the Yankees are pretty much d … wait, two-and-a-half games back of the wild card? Dammit, Yankees. Just die when you're supposed to.

Evan Gattis hit the longest home run of the season

That's 480 feet according to the lasers.

As succinct as analysis comes. My favorite part of the highlight is how inactive the lower half of Gattis's body was. He barely moved his plant foot. And, yet, it was the longest homer of the year by anyone. It's never a bad time to note that the person responsible for a home run like that was also responsible for a quote like this:

He lived in a hostel at Taos and worked at another ski resort there, but after three months Gattis was ready to move on.

"Going to California, going to see some different people," he said. "Because there’s a lot of them from the West Coast — the California guru game."

"I have as much raw power as anyone in the world. But, hold on, lemme check out this guru game. Seems legit."

The Braves are probably the greatest great team you don't read about these days. Gattis is one of the reasons they're so good. It must be nice to have a catcher like that in reserve, just in case, unless you want him hitting dingers at will. It's the little things that make the best teams.

The Astros played the A's

Which means there's another chance to add to the StoryStream™. 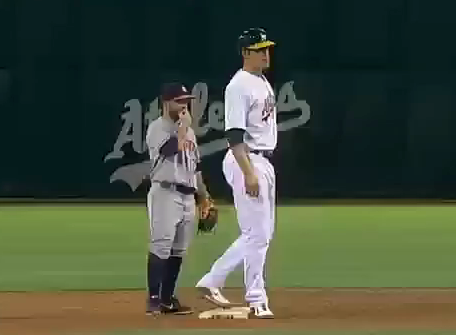 Yes, yes, a thousand times, yes. This is why baseball is better than your sport.

• Have the big awards already been won?

• About those huge September rosters ...

• Is it time to bump Lance Lynn yet again?

• The pros and cons of Mark Trumbo