'Making your teammates better' by being good at basketball

It means almost nothing to say that a player "makes his teammates better." Plus, The Hook considers Canada's FIBA failure and the Hall of Fame's scheduling misstep.

Share All sharing options for: 'Making your teammates better' by being good at basketball

Watching football over the weekend, I heard an analyst credit a quarterback for making his teammates better. We hear it all of the time in basketball, but it struck me as an odd construct in football. How does a QB make his teammates better? Well, by doing his job well! Reading the defense, throwing well-placed passes, leading his receivers into space. Basically, by playing well. So isn't that a much more simple, attainable concept? A quarterback doesn't necessarily make his teammates better: he just plays well, which is good for the team, because obviously.

9/6: Doping vs. genetic advantage
9/4: We need more incentive-based contracts
9/2: The next labor battle
8/30: The problem with marijuana in the NBA
8/29: Is NBA drug use really rampant?

Saying that a player makes his teammates better is just another way of saying that someone is a good basketball player.

The cliché lacks specificity, and it's frankly immeasurable. (Something like regularized adjusted plus-minus [RAPM] is a measure of how a team performs when a player is on the court. That includes the player himself, not just the teammates.) Can you be a good player who doesn't make teammates better? Even the most selfish scorers who do that job well "make their teammates better" by relieving defensive pressure. It's a totally meaningless construct when broken down -- not just for QBs, but in basketball as well. But we hear it all of the time. What are we really trying to say when we use it?

In most cases, it's making the right passes. It's a discreet skill we can measure (assist rate, for starters) and, again, a basic job duty of most NBA players. If making your teammates better is doing the dirty work (rebounding, screens, hitting the floor for loose balls) ... isn't that something every player does to some extent? If you do that stuff a lot but stink at shooting and scoring -- say, like Lou Amundson -- can we really say you're making your teammates better? You're making it harder on them by not being all that good in some areas.

Instead of crediting players with an empty compliment like the "makes his teammates better" lark, let's identify specific actions a player does repeatedly and how they benefit the team.

Canada needed to beat Argentina on Sunday to qualify for the 2014 FIBA World Cup. Their team is going to be an international force at some point: with Tristan Thompson, Anthony Bennett and Andrew Wiggins all citizens and interested in representing the nation, that's a pretty strong core.

But the squad's not all there yet: Thompson was joined by Andrew Nicholson and Cory Joseph in Venezuela for the 2013 FIBA Americas tournament, and despite a late lead over Argentina, Luis Scola took over. 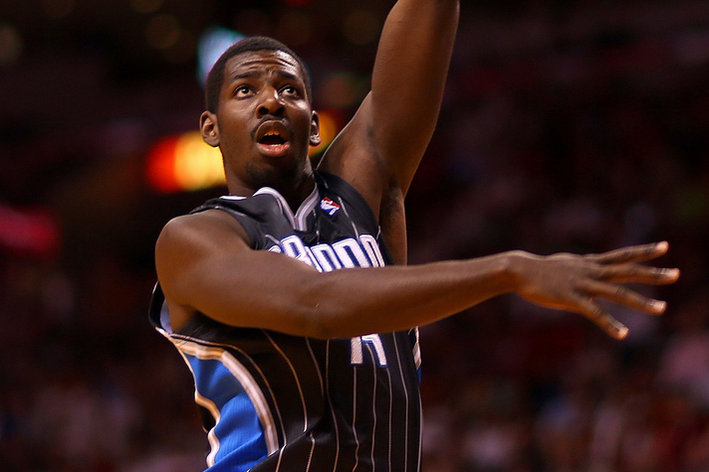 Canada's shot at qualifying for the Cup is now a bet that FIBA will take only two European teams as wild cards, and not China, who failed to qualify through its continental tournament. Brazil failed to qualify through FIBA Americas as well; as the host nation for the 2016 Olympics, it seems likely that FIBA will give that country a nod for the World Cup. So Canada is likely to be out of action until the 2015 FIBA Americas tournament, where it will need to win to earn a bid to the Olympics. And the next World Cup isn't until 2019. So getting some high-level international experience for the Canadians is going to be a tough slog because of Sunday's loss.

What's all the more improbable is that Mexico is headed to the World Cup. The nation ranked No. 32 worldwide by FIBA only qualified for FIBA Americas because Panama was suspended because there were two basketball federations, and apparently the unofficial one had been competing in international play. (Yep, that's Gary Forbes: whistleblower. SLAM! was doing this thing way before The Guardian.) So Mexico got in on a lark, then made the semifinals over Canada and Brazil to qualify for the World Cup. Which goes to show you that crazy things happen in international basketball.

Canada's time will come, but because of the calendar, it might be six more years before that happens. Have fun being patient, Canada.

Despite the disappointment, the good news for Canada and the Orlando Magic is that Nicholson was really, really good in the tournament.

A HALL OF FAME IN THE MIDDLE OF THE FOREST

The Naismith Memorial Basketball Hall of Fame had its annual induction ceremony on Sunday. Gary Payton headlined the class with Rick Pitino, Jerry Tarkanian, Bernard King, Oscar Schmidt, Roger Brown and others. One problem: the Hall of Fame ceremony was smack in the middle of the first Sunday of the NFL season. Talk about hideous timing.

Competing with the NFL is something the NBA avoids at all costs. See: Thanksgiving, where the traditional Thursday NBA on TNT doubleheader takes a week off. That memo needs to be routed to Springfield so that the inductees can get the respect they deserve. What's wrong with, say, a Tuesday afternoon ceremony? The media landscape is different now, and there's so much airtime to fill that as long as you avoid competing with a megalith like the NFL, you'll be in decent shape.

How many NBA fans even knew there was a ceremony yesterday?

SPEAKING OF THE HALL

As is natural, a few folks tweeted the names of the basketball players who will eligible for the Hall for the first time next year. Robert Horry has been mentioned among these names. My fuller thesis on this topic will come later this week, but I swear to all that is holy in basketball when I say that I will judge you harshly for your thoughts on this matter. Friends can have differences of opinion. But friends of mine cannot believe Big Shot Bob to be worthy of the Hall of Fame. It's a dealbreaker.

• Can we still believe in the Lakers?

• Mahmoud Abdul-Rauf: Sometimes you have to sit to make a stand