He was one of the first poster boys for the baseball card boom of the late-1980s/early-1990s. And now he's a Hall of Famer. We're all getting old.

Share All sharing options for: Frank Thomas, the first baseball-card-bubble Hall of Famer

With all the controversy over the announcement on Wednesday, it's easy to miss three excellent candidates getting elected to the Hall of Fame this year.

As great as that is for the Cooperstown museum, one aspect of the election has me excited. Frank Thomas's election in his first year on the ballot marks the Chicago slugger as the first poster boy of the 1990s baseball-card boom to reach the Hall of Fame. Though fellow inductees Maddux and Glavine started their careers only a few years earlier (in 1986 and 1988, respectively, same as fellow Hall of Famers Barry Larkin and Roberto Alomar), they were only on the cusp of the baseball-card explosion that came about in 1989 when Upper Deck debuted their premium card set. From that moment on, the stakes were raised; suddenly baseball card hobbyists had reason to treat their collections as major investments; even more so than they were already.

Prospect speculation was always a major part of the baseball card business. Jerome Walton. Gregg Jefferies. Kevin Maas. Phil Plantier. Anyone who collected baseball cards in that era knows exactly what I mean when I say those names. I must have had a dozen Gregg Jefferies "Future Stars" cards. But these "hot prospects" rarely seemed to pan out, and collectors were often left with stacks of nearly worthless rookie cards. 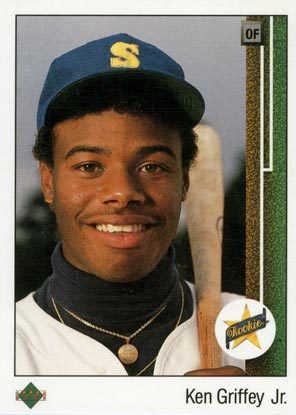 That changed in 1989, when the brash new Upper Deck and their glossy, action-packed, hologrammed set came on the scene behind the all-American smile of 19-year-old phenom Ken Griffey Jr. Suddenly, collectors couldn't get enough of the card or the young superstar, and prices skyrocketed like never before.

The true test of any player's worth on the card market came in the monthly ratings of Beckett Baseball Card Monthly. The magazine was the trusted source in card values, basing their figures on surveys from shops around the country. As part of their price guide, BBCM also featured a "Weather Report" that looked at the "Hot" and "Cold" players in the league every month. From the moment the set was released, teenaged Griffey shot to the top of the "Hot" list as the most sought-after card on the market. 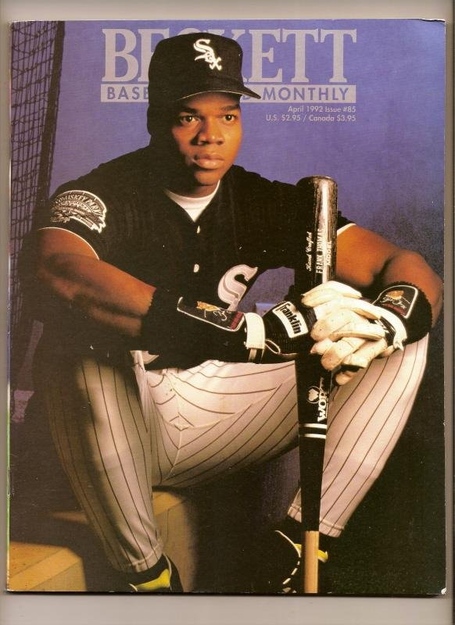 About a year later, the man to unseat Griffey's control over the baseball card industry made his debut. When Frank Thomas was called up from Double-A Birmingham in August 1990, in the midst of a White Sox pennant race, no one knew exactly what to expect from the 22-year-old giant. Collectors certainly didn't notice much, as his rookie cards stayed at an unimpressive 35 cents for most of the year.

Things changed the following season. As the Big Hurt slugged his way to 32 home runs and a 1006 OPS in his first full season (finishing third in the MVP balloting), collectors flocked to his cards. His 1990 Topps card, for example, surged in value from 35 cents to $4 by the end of the season. While that may not seem like all that much, it was far and away the most expensive card of the Topps set that year. The card that really made collectors' mouths water, however, was from the 1990 Leaf set. BBCM explains why:

Frank's rocket ride to the Hot list summit was fueled primarily by his key Rookie Card, 1990 Leaf #300. The card is a hobby dream, representing the perfect match of an attractive, premier, in-demand card set and a power-hitting rookie in a major media center.

Following in the footsteps of Upper Deck the year before, the Leaf set was released as a "premium set," using crisp, glossy images and a high-quality paper stock. The complete set quickly became popular (valued at $250 only a year later, ten times the price of most other sets), but it was the Thomas card (below) that Beckett later called "perhaps the most actively traded baseball card in all of 1991." 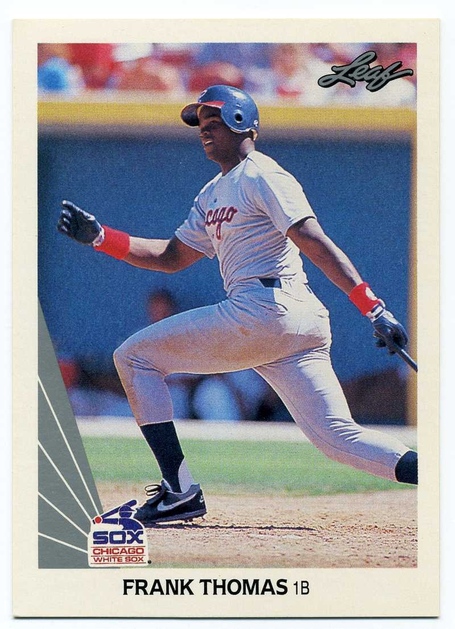 Thomas took over the top spot on Beckett's "Hot list" in October 1991. As the magazine put it, "It's the first time since March of this year that someone other than the Mariners' phenom sat on the Hot list throne."

Sixteen months later, Thomas was still there. Calling it an "unprecedented" stay atop the Hot list, Beckett credited the 1990 Leaf rookie card ("the most ballyhooed card of the '90s") as a major reason for his popularity among collectors. The card's value certainly reflected that status. Debuting at only $3.50 in the October 1990 issue, the Leaf card had already increased to $50 when Thomas took the crown from Griffey. A year-and-a-half later, the card had reached peaks of $70, "a sum most collectors would spend on an entire box of premium cards."

Thomas continued atop the Hot list well into 1994. Twenty years and 521 home runs later, Frank Thomas is a Hall of Famer. Baseball-card collectors are finally vindicated!

With the man he unseated still a few years away from making the Hall of Fame, Thomas is the first poster boy of the card collecting era to make it to Cooperstown. All those kids and all those collectors who spent their hard-earned allowances on a Frank Thomas rookie card in the hopes that it would finally pay off can finally cash in! Maybe it'll be enough to pay for a trip to the induction ceremony this summer.

So how much money would a card collector from 1993 make today, if he's held on to that card for all these years? Let's see. Assuming the card's in absolutely perfect condition, the 1990 Leaf Frank Thomas that our collector paid $70 for more than twenty years ago is worth… about $75 today.