The Hall of Fame, a proposal

Share All sharing options for: The Hall of Fame, a proposal

Gentlemen, ladies, thanks for giving me a moment of your time. I'd like to thank all of you for coming today. This is the defining issue of our times, and I appreciate you being a part of the solution.

Right now, Barry Bonds is sad. He's eating rum ripple straight from the freezer, and he's watching a show he doesn't care about.

Right now, Roger Clemens is reflecting on the horrible decisions he's made in his life. He can't sleep.

But we can do more.

Yes, we can. It's commendable that, through our collective efforts, we've kept the cheaters and disgraces out of the Hall of Fame. But the Hall isn't pure enough yet.

The Hall isn't pure enough yet. We have to remove the players, already in the Hall, who would have taken steroids if they were available.

Please, please, sit down, sir. You had your time to speak. This is not such an outlandish suggestion. We know that baseball players of the '80s, '90s, and '00s had access to performance-enhancing drugs. And they took those drugs because their souls were blackened, corrupted husks. But what of the players in the '20s? The '30s? The swingin' '50s? They didn't have a chance to show us their sub-human dark side. They didn't have the same opportunity to cheat.

We have to assume everyone from the mid- to late-'60s is dirty, of course.

There are some players we can eliminate right away. Mike Schmidt is out if we're successful. Bob Gibson is gone. I appreciate their candor, but they crossed the line. There's a character clause, people.

We are the stewards of the Hall. It must be kept pure.

You might be thinking to yourself, how do we know which players would have taken steroids. You might be worried that we'll do nothing more than guess.

We're not savages. We'll use evidence.

Take King Kelly, for instance. He was a Beaneater, which sounds vaguely dirty and suspicious. But more importantly, here's what we know about him: He was probably the first big leaguer to "cut a base" -- running directly between baselines when the umpire wasn't looking. He apparently invented the hook slide, too.

He's out. He was looking for advantages that others wouldn't consider. He most certainly would have slathered himself in steroids.

Let's talk about Home Run Baker. He would've had a lot of pressure to live up to his name. I don't know what his parents were thinking, but he was saddled with a curse, and it would have haunted him until he retired. If he kept one-hopping the wall, people would have had a good laugh about that, and I think that would have pushed him over the edge.

He's out. There's no way he could have resisted.

What about Willie Mays?

Please, please, I have a lot more of these to get through. Sit down. Sit down! I have, in my hand, a list of 306 ... a list of known Hall of Famers, and it's our duty to decide if they would have taken steroids if they were available to them. 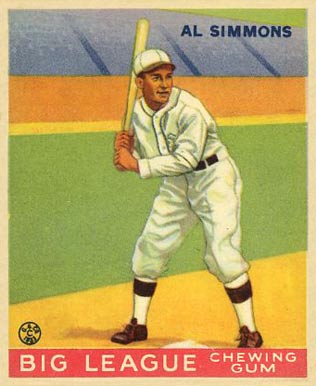 He's a pixie in that picture, a tiny little pixie. He wouldn't have lasted a season in this era if he wasn't juicing. The temptations would have been too great. Al Simmons is exactly the kind of player we can't have in this museum built to highlight our National Pastime.

What would he have done? All of it, probably. Just look at him.

Pie Traynor always seemed legit. Maybe it's the name. So warm and inviting. He's in.

Wait. You in the back, what's that? Oh. We're doing this because it's not enough to keep the modern players out. They had the opportunity to break the rules, and they did. We're looking for the players who would have broken the rules, but couldn't. They existed. You have to believe me.

This is about character. Ethics.

At least kick Simmons out.

Where are you taking me? You have to listen to me.