Tank or not, it's about the quality of your GM and luck

Luck plays a role in everything, and there's no foolproof way to win in the NBA.

Share All sharing options for: Tank or not, it's about the quality of your GM and luck

If it feels like we've been harping on the topic of tanking for two years now, it's because we have. Two years ago, our friends at TrueHoop set out on a crusade to dig into the problem of tanking and potential solutions. Much of the basketball world has rung that bell quite often in the years since, particularly since the vaunted 2014 NBA Draft came into view.

One of the assertions I've always been curious about is the finding that tanking (or more accurately, institutional tanking. That is, a deep rebuilding pursued by the GM via roster stripping, not pursued by the coach or players) doesn't even work. Really? It would seem that if tanking didn't work, no one would do it!

Henry Abbott dug into this very subject in a 2012 piece titled "Does tanking even work?" His verdict: No. Abbott talked to a number of experts, armed with some great data, that showed that teams almost never go from truly bad to truly good in a reasonable amount of time.

But there's a small flaw in the way the data is presented: The "tanking teams" are compared with the league at large, which includes the league's really good teams. And a basic fact of the NBA is that really good teams typically stay really good for a protracted period of time.

The more fair comparison is between teams that aim for the bottom and teams who don't bottom out, but are not title contenders. The tankers and the teams trying to fling themselves upward from the treadmill of mediocrity. 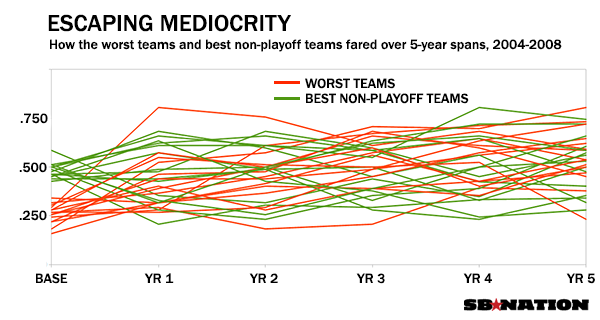 As it turns out, there's little homogeneity in how teams in either category turn out. Check out how clustered the teams are in the base year — the best non-playoff teams right under .500, and the worst teams around .300 and lower. Five years later, they are all over the place. The bulk end up just a bit better or worse than .500 — the fat part of the league's bell curve. Five years out, five teams are considerably better than average and seven teams are considerably worse. Of the five superior teams, three began awful. Of the seven inferior teams, five began as one of the best non-playoff teams. (Call this the lesson of the Milwaukee Bucks, who have been dedicated to staying away from the bottom of the standings, but who were not able to keep the tank away.)

So let's review how each set of 15 teams fared after five years. Of the 15 teams that bottomed out, three were well above-average, 10 were somewhere around average and two were still or again awful. Of the 15 teams who finished just outside the playoffs, two were well above average, eight remained somewhere around average and five were awful after five years.

This chart shows the averages for each set in each year after the base year.

Abbott is right. Some teams who tank out forget the part where they are supposed to get better. The Wizards were the third-worst team in the league in 2004; five years later, after a spate of flirtations with being a good club, the Wizards were again the third-worst team in the league. The Timberwolves were awful in 2008 ... and awful in 2009, 2010, 2011, 2012 and 2013. It does happen. If we did this study again at the end of this season, the 2009 Kings (worst in the league) would have five years under their belt, and they'd share a story with the Wolves. Neither has been able to escape the tank.

But there's also the Heat, who were the league's worst team in 2008 and won 66 games and a second-straight title five years later. Or the Magic, who went from league's worst in 2004 to the NBA Finals by 2009 and a 59-win season in 2010. The Seattle SuperSonics were the second worst team in the league in 2008; in 2012 the Thunder made the Finals and in 2013 they won 60 games. There's only one title-winner in the bunch, but that's more than the other group — the best non-playoff teams — can present.

Those teams, on average, watch the teams once much worse than them zip by in Year 3. They call it a treadmill of mediocrity for a reason. It's actually likely than teams in that range get worse over the course of five years than get better. The two best teams from the treadmill category in Year 5 are the 2005 Magic (who were a tank team in 2004) and the 2005 Cavaliers (who were the league's worst team in 2003, just outside this data set). Embracing the tank doesn't work? Being just good enough to flirt with the playoffs works even worse.

What is "tanking" anyway

Once we think more about what the term actually means, we find that teams aren't really tanking at all.

What is "tanking" anyway

But it's not universal: Again, look at how scattered the once-clustered teams become by Year 5. Tanking doesn't always work. The treadmill doesn't always fail. And this brings me back to one of Henry's comments on a topic I've been thinking about a lot lately. It came in conclusion to a point about how the success of the Bulls, Celtics and Rockets after drafting Jordan, Bird and Hakeem respectively are exceptions to the argument against tanking as a path to success.

[E]ven the exceptions are really just examples of extreme luck followed by extreme success in team-building.

This is not just a statement to tag on the best Bulls, C's and Rockets teams. This is a statement to add to the stories of the Heat, Thunder, Spurs and Lakers. Every single championship team in the modern era is, in part, a product of extreme luck and extreme success in team-building. To dismiss the role of luck in any great success — basketball or otherwise — is to defy nature.

There are no accidental great teams. Building a contender takes skill. That applies whether you're Sam Presti stripping a roster bare and rebuilding from scratch or whether you're Larry Bird making constant tweaks, additions and subtractions as you stay afloat. But luck — or really, randomness — always has its say, too. Perhaps the tanking teams rely on it more than do the treadmill clubs, and perhaps that's why they seem more likely than their counterparts to reach the highest levels more quickly.

The perfect combination — the championship-winning formula — is top-notch GM skill and excellent luck. The perfect anti-combination — the formula of the Kings and Wolves from 2006 on — is a lack of GM skill and horrible luck. Everyone else tends to have some mixture in shades of gray. To neglect the role that either play is highly dangerous for team owners and problematic for those of us who write about the game.