Welcome back to Baseball Nation's academic treatise of where home runs look their best. This might seem like the bottom tier to you, but we're actually out of the doldrums. There aren't a lot of dogs from here out. Turner Field was the last park in the rankings that doesn't really impress when a 430-foot home run goes gently into that good night. The parks from now on generally do something right.

But not enough right.

So let's think about what they did wrong.

I'll be honest. If the batter's eye of Nationals Park were a giant, three-story Skee-Ball machine, with home runs that landed in the top circle literally starting a chain reaction that launched a manned mission to Mars, I'd probably still be completely dismissive. Eh, yeah, the Skee-Ball and rocket launch is cool, but it's Nationals Park. How cool can it be?

Not to revisit the same jokes and criticisms of the past, but Nationals Park is the chicken breast of stadiums. You can do wonderful things with chicken breast. Some of the best tacos I've ever had were stuffed with some variation of seasoned chicken breast. But it's not what you're taking to the desert island with you if you have a choice. It's probably not in the top 20. It's a utilitarian meat, good for a few things, excellent in the right hands, but always in the shadow of cooler, tastier things.

Is that harsh? Probably. I've never been there. But the left field doesn't allow for very creative homers. Here's the longest homer in Nationals Park this year.

Outfield bullpens are the death of transcendent dingers. That was the longest homer in D.C. this year. That was it. And it landed maybe 10 rows up? 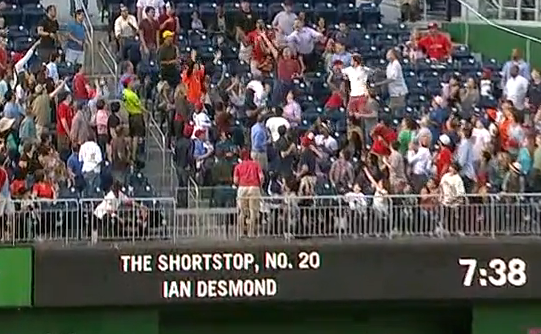 Think about where that homer goes in your favorite park. Even if it's a dinger-sad park, it probably goes more than 10 rows up. Nationals Park has an upper deck. It has an upper-upper deck. But it has nothing going on from left to right-center.

Yankee Stadium is basically Nationals Park with a famous dad. I didn't go to school with Boz Scaggs's kid, but if I did, I figure everyone once in a while, I'd be reminded that he was Boz Scaggs's kid. And that would be really cool. Then things would pretty much resume to the way they were. Except I'd have "Lowdown" stuck in my head. Which would be awesome.

Here's one of my favorite home runs ever:

What makes it good? History, I guess. Barry Bonds is history, Yankee Stadium is history, and this was the first time the two collided.

That was the old Yankee Stadium, though. The new old Yankee Stadium doesn't have that expansive third deck down the line, where 390-foot homers could seem like the longest homers you've watched in your life. It still has a third deck, but it's not the same.

So now let's talk about a known predator for dingers in the wild. Bullpens. Outfield bullpens are the natural enemy of aesthetically pleasing home runs. It takes a super-athlete in his prime, with the right pitch at the right time with the right approach, to hit a ball 430 feet. Here's what you might get in Yankee Stadium:

It almost reached the seats. Better luck next time, Francisco! Again, that was the longest homer in Yankee Stadium last year.

Homers to right are still awesome, of course.

There's something missing that was lost between the switch from old to new, but that's not worth hashing out. But bullpens in both power alleys combine for one obnoxious home-run feature.

Beyond that, though, the relative ease of homers to right means the new Yankee Stadium gets knocked down a few pegs. It might be the cheapest field of any ballpark in the game, worse than the Crawford Boxes and worse than the Pesky Pole, but consistently reachable. There is nowhere in baseball with homers that frustrate more than Yankee Stadium. It's an easy demerit.

The fences are in a little from where they used to be, but Petco Park is still a pitcher's haven. It's not at the bottom because of a old building. Allow me to revisit a theory I came up with a couple years ago. 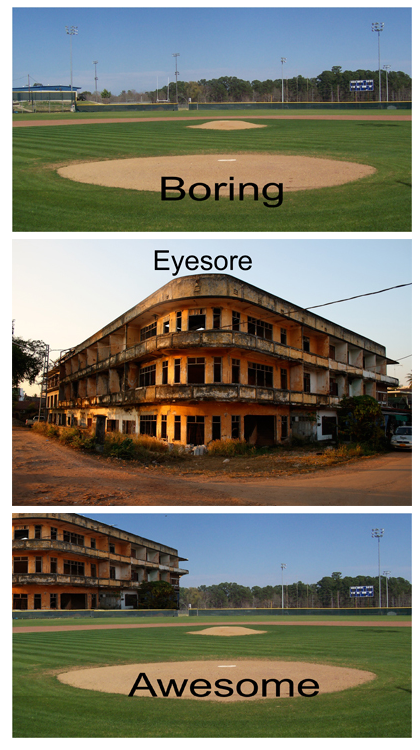 Don't try to explain it. I've wasted enough time thinking about it. It just works. And look at this home run:

That was the 91st-longest home run in Petco Park in 2010. That's not hyperbole. So I guess what we're looking for are the stuffed trousers or push-up bras of ballparks -- the parks that get away with impressing us with the relatively unimpressive. The left field of Petco does an outstanding job of that.

The center-field area has a sandbox/beach area, and there's always a chance a kid could get hit in the shoulder or something, innocent enough to make us laugh without feeling too guilty. Right field is kind of boring, but there's a weird short porch down the line that's kind of interesting.

Mostly, though, it's that gigantic building in left. It adds short, reachable tiers that make up for the pitcher-friendliness of the rest of the place. I'm kind of smitten with it. Who was the genius who thought this would make for an outstanding ballpark feature? Hope he or she got a raise. Or at least a year's supply of western metal.