Share All sharing options for: Hat angles are important: A helpful guide

Colin Kaepernick continues to baffle the media, and with good reason: he wears his hat backwards.

first… RT @salmaiorana: Kaepernick. Always so media friendly. Turn your cap around and act like a professional quarterback.

This is a natural kind of confusion for the beleaguered columnist: once upon a time, our nation agreed on hats. They were to be worn, and worn every time you stepped out of doors. They faced one direction only, and were tipped as a sign of respect to ladies in lieu of the right to vote.

The baseball cap changed that forever. Worn securely at all angles, it spins around the heads of Americans with unpredictable, wildly variable positioning, each with its own secret meaning and history behind it. There is a code here, and we are here to explain it to those who may have missed the last 30 years of American hat acculturation, a.k.a. the sporting media. 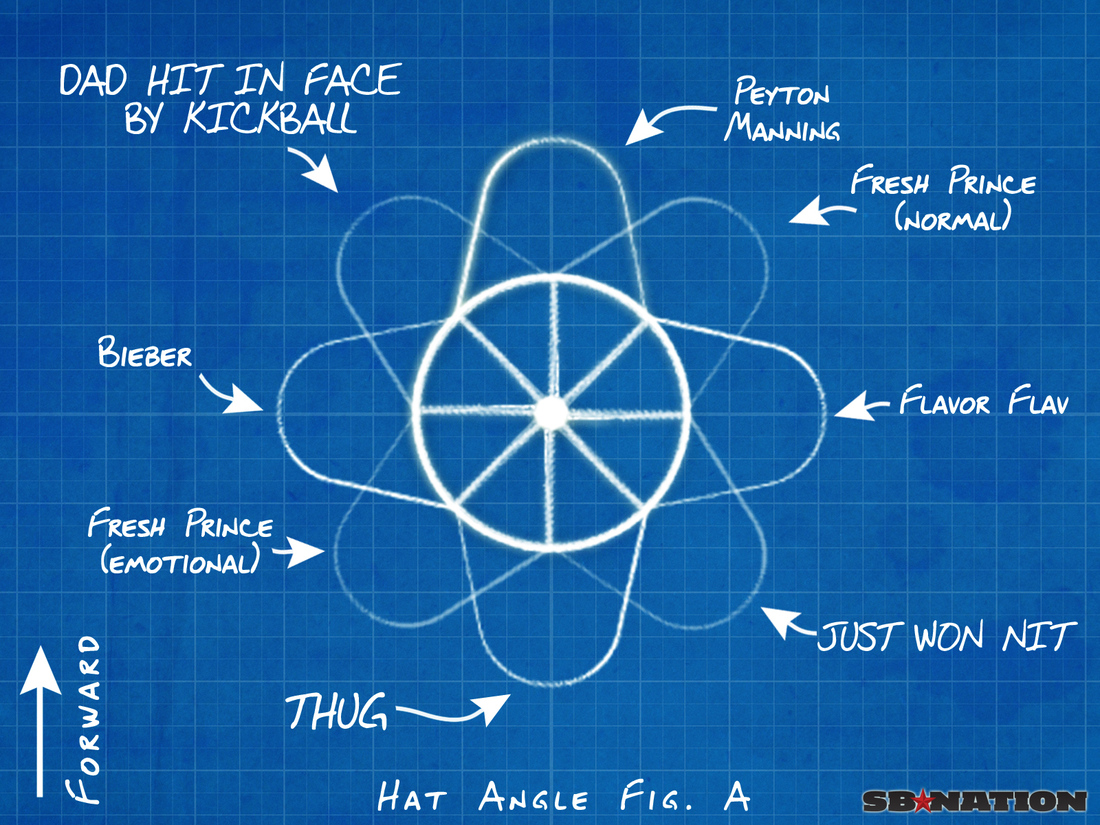 Zero degrees/ straight ahead: Peyton Manning. The pro's pose. Wearing your hat straight forward just unveils the rest of your character, and in this case that character is that of a no-nonsense hombre who just plain gets it. No one wears their hat straighter than Peyton Manning, and this is a literal truth. It is aligned and placed by laid-off NASA engineers in the locker room, and is the straightest hat ever worn by anyone ever in human existence. Building frames may be hung by its perfect level accuracy. Nations can -- and indeed, ARE, dear reader -- reliant on its steady alignment.

45 degrees: The Fresh Prince (normal). You'll be shocked to hear this, but the Fresh Prince's hat skew in the credits for the show is barely 45 degrees, if even that. The tilt of the hat here means someone is looking for fun with youthful enthusiasm, and is also only doing their current job thanks to tax issues.

90 degrees: Flavor Flav. I looked: no one else wears their hat perfectly to the right besides Flavor Flav. Sure, there are people who come close, but it's always at an angle. To the right, and at a perfect 90 degree angle means you are hype man Flavor Flav, and once dated Brigitte Nielsen. You have something in common with Mark Gastineau now! That's not necessarily a good thing!

135 degrees: You Just Won The NIT. Congratulations. It's not the Big Dance, but it'll have to do this year, buddy.

180 degrees: THUG. See also: punk, clown, chump, or any variation of those words in succession. The fully retrograde hat signals to the world that you do not care for its conventions or standards, and will certainly not be a success anywhere, and especially not in the searing cauldron of meritocratic excellence that is the NFL. You probably don't even know what sock stirrups or the Acela are, Backwards Hat Guy. EXCELLENCE STARTS WITH SOCK STIRRUPS AND SPRINGSTEEN. This world is doomed.

225 degrees: Fresh Prince (emotional). The mirror image of the composed Fresh Prince, you turn your hat to this degree to indicate extreme emotional distress, perhaps over your ne'er-do-well absentee father. Damn you, tears-from-watching-that-scene-after-Uncle-Phil-died-recently. Damn you to hell.

270 degrees: Justin Bieber. You are now Justin Bieber, at the wheel of a speeding Ferrari in Calabasas, California. You are about to get pulled over. Do you stop?

[press A to stop]

[press B to accelerate because you ain't going back to jail, ever]

315 degrees: Dad Hit In Face By Kickball. It's a matter of science, but yes: all fathers hit in the face during kickball games have their hats jarred to this exact angle. Should you see a dad with his hat at this angle, administer first aid immediately by playing "Glory Days" at high volume, and then handing him a Bud Light in the team-themed can of his choice.