Share All sharing options for: Where home runs look their best, part V: #19-21

Welcome back to Baseball Nation's ranking of ballparks by how much they improve home runs. Which parks make homers look better? All of them are at least okay, but some of them do more than others.

Probably higher than it should be for one reason.

How far did Canseco's homer go? According to the measurements of the time, about 480 feet.

How far did the home run that Canseco hit off Toronto Blue Jay left-hander Mike Flanagan travel? SkyDome's tale of the tape estimated it at 480 feet, but Rickey Henderson, who hit two home runs in the A's 6-5 victory, said it had to be 600 feet at least.

Now, 480 feet isn't that special in the annals of home runs. It would hover around the top of the list every year, but it wouldn't automatically be at the top. Evan Gattis hit a homer farther this season (see below), for example. But it's pretty rare to hit one 480 down the line in left. Rogers Centre, née SkyDome, was just about the best park for it, with decks upon decks upon decks. It's why I remember where I was as an 11-year-old when Canseco hit it. The fifth deck!

One homer does not a dinger ballpark make, of course. Luckily, Rogers Centre has more going on than that. Here's the longest homer hit there this season:

The camerawork makes it look less impressive, but that's no fault of the stadium. There's something hanging over the batter's eye, and that's an important thing. Too often, there's a batter's eye and nothing above it, so instead of the homer landing in an upper ring of the seats, it lands in grass or more grass or higher grass, and that's it.

This one probably shows the Centre's center and right-center better:

It clangs off an upper upper deck, which is always a good thing, but another important thing to point out is that if Colby Rasmus had hit that just a little harder, it would have hit a hotel window. I'd guess that most of the people staying in that hotel are at least mildly interested in baseball, but there's always a chance that it'll hit the window of someone who absolutely does not care that a baseball game is going on right below them. Maybe even break a window or two.

If you're looking for unique features, that'll do just fine. An honest-to-goodness hotel, just within dingers' reach. There used to be a Hard Rock Cafe in the stadium, too, but they took their collection of Donald Fagen-used lip gloss and Jeff Beck doodles to another part of the city in 2009.

If it can wing someone who isn't expecting a baseball hit at them, it's probably a good homer park. I'm a sucker for reachable concourses and concession stands. One second you're getting fried beer, and the next minute you're diving for cover. That's how a ballpark experience should be every so often.

Here's another video of the reachable concourses, in which Giancarlo Stanton declares war on the peaceful citizens of Planet Hoagie:

There are copious decks, too. Right field has the preferred three-tier setup, and even though there's a dreaded bullpen in right-center, Citizens Bank somehow turns that into a positive with a tiered bullpen atop that.

If you want to know why there was such urgency to lock Ryan Howard up before his original deal was done, it was because he makes purty home runs at Citizens Bank. Here's his second upper-deck homer of a 2009 game:

Third decks are always a good thing, but only if players can reach them. A third deck doesn't do any good if it's 550 feet away. Howard nails the second deck with some frequency (awesome) and can get the third deck with a titanic homer (more awesome).

The only thing that hurts CBP is that it's too easy to hit homers there -- it was first in HR park factor last year. I remember the opposite-field shot in the last game of the 2010 NLCS. Total joke of a home run. Probably shouldn't have counted, as it juuuuuust squeaked over the wall. Those kinds of homers are usually pretty disappointing

Both of the home runs in Safeco Field were legendary, so let's explore both in great detail.

Jokes! But Safeco is an underrated homer park. Check out this homer from Carlos Peguero:

Now look at a still from when the ball was in flight: 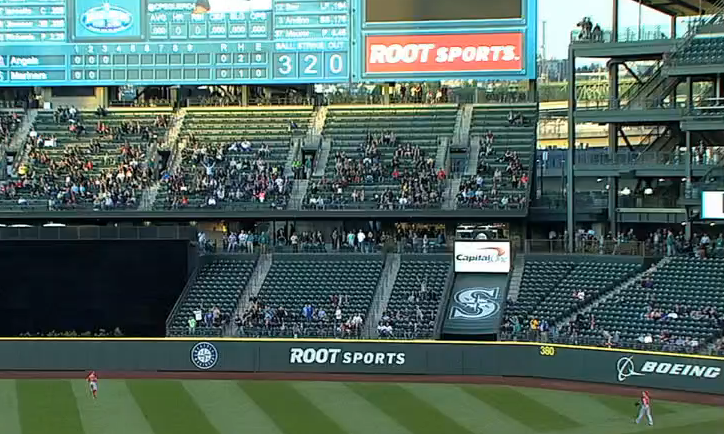 There's an upper deck, sure, and there's a third deck in right. But there are also stairwells and girders and beams to clang off. In center there's a dead-black batter's eye, which is visually pleasing when the ball sails into it. In left, there's a nice upper deck, too, and there's a high mini-monster. Really, there isn't an aesthetic dud around the outfield, and the more I start talking about Safeco, the more I'm geeked on it as a home-run park. Are there a bunch above it that are overrated? Possibly.

The mental block is that when you think of home runs, you might think of 28 or 29 parks before you come to Safeco. So it can't really be in the top two tiers, can it?

Man, I think I'm going to regret this one. But I'm checking the list, and I don't see another park I'm wavering on …

Nope, I'm moving it ahead of Petco. And Rogers. Maybe I won't stop there. Citizens? It's coming for you. It's midnight on a Sunday, and I really want to finish this, but I can't do it with a good conscience. All of a sudden, I'm smitten with Safeco Field as a home-run park, and that is the last thing I expected when I started this.

Although, I'm not sure if it's the all-time Seattle champion when it comes to making home runs look awesome just yet...