The Orlando Magic rookie has shown flashes of brilliance, but for him to be a consistent difference-maker in the league, he needs to be channeled into a smaller role.

Share All sharing options for: Victor Oladipo is more Robin than Batman

No rookie this season has been more up and down than Victor Oladipo. For every performance like the triple-double against the Philadelphia 76ers or the 35-point, 8-assist effort he had against the Chicago Bulls on Wednesday, there have been a number of games where he scored less than 10 points or had more than five turnovers.

But while the inconsistency should go away with time, stardom is far from guaranteed for 2013's No. 2 pick.

So far this season, Oladipo is averaging 14 points, four rebounds and 3.5 assists a game. That's the good news. The bad news is that he's shooting 42 percent from the field and 29 percent from three while also turning it over more than 3 times a game. It's not that he's struggling, it's that he's not showing the array of skills necessary for a guard his size to be an All-Star caliber player. Most elite 6'4 guards are elite shooters and passers. Oladipo is neither.

In his junior season at Indiana, he was an excellent shooter, shooting 60 percent from the field, 44 percent from three and 75 percent from the free-throw line. However, in the two seasons prior, he could barely hit the broadside of a barn. He went 8-26 from the three-point line as a freshman and 10-48 as a sophomore. His improved percentages as a junior were encouraging because they showed that he'll work hard to fix a weakness, but they didn't mean he had turned the corner completely.

That has become clear over the first 40 games of Oladipo's NBA career, especially as the scouting report about him as gotten out around the league. He is not consistently knocking down open 3s, which means teams don't have to respect him spotting up off the ball. When he has the ball in his hands, defenders can play off him and concede the jump shot, preventing him from getting to the rim. Oladipo is the king of the long two, going an abysmal 27-71 from the top of the key. 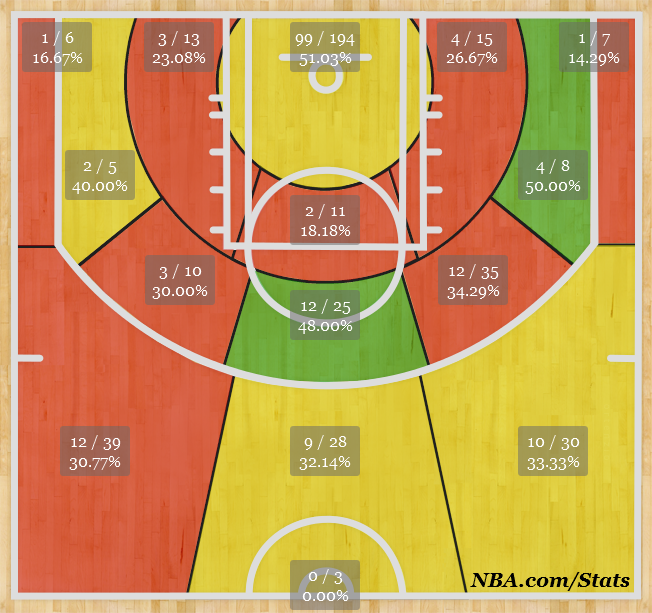 As a passer, he is still years away from running a team. Oladipo played mostly off the ball at Indiana: Cody Zeller was the focal point while Yogi Ferrell ran point. Oladipo showed flashes of seeing the floor and making the right play, but he was mostly getting out in transition, crashing the boards and hunting for his own shot. He averaged 2.1 assists and 2.3 turnovers in his final year at Indiana. Russell Westbrook (another college off guard turned NBA floor general) averaged 3.8 assists on 2.2 turnovers in his last season with UCLA.

When you compare Oladipo to fellow rookie point guards Trey Burke and Michael Carter-Williams, you can see how far Oladipo has to go as a playmaker and decision-maker. Burke and Carter-Williams have instantly made their teams better. The Jazz are 12-16 with Burke and 1-11 without him; the 76ers are 12-15 with Carter-Williams and 1-10 without him. They are both athletic guards with elite ball-handling and passing ability who will run NBA teams for a long time.

To be fair, both Burke and Carter-Williams were the primary floor generals on Final Four teams last season. People should not have expected Oladipo to be nearly as advanced a player as either, especially after Carter-Williams dominated their individual match-up in Syracuse's Sweet 16 win over Indiana.

The real concern is comparing Oladipo to the other shooting guards in his class who have come into the league. Forget the ones drafted in 2013 and look at the ones taken in 2012. Before Oladipo's junior season, the college game lost a lot of talent at the position. Washington's Terrence Ross averaged 16 points and 6 rebounds on the Pac-12 regular-season champs. A year after he won a national title at UConn, Jeremy Lamb averaged 18 points and five rebounds a game. Dion Waiters averaged 13 points while coming off the bench at Syracuse and Will Barton averaged 18 points and eight rebounds at Memphis. And none of those were the top shooting guard taken in the 2012 draft; that honor went to Florida freshman Bradley Beal, who parlayed a fast finish into the No. 3 overall selection by the Wizards. All five went pro while Oladipo stayed in school after averaging 11 points a game his sophomore year.

Should he start at PG?

The Magic rookie talked to Orlando Pinstriped Post about how he's progressing while learning the league's toughest position.

Should he start at PG? Oladipo still learning the position

So while Oladipo was dominating younger players at a lower level of competition last season, Lamb and Ross were measuring themselves in practice against guys like Kevin Durant, Russell Westbrook, DeMar DeRozan and Rudy Gay. Neither did much on the court, but they both came into this year far more seasoned than Oladipo, allowing them to play important roles on top-four seeds. Lamb and Ross are bigger guards who are far better shooters than Oladipo is ever likely to be.

None of this means Oladipo can't or won't be an excellent player in the NBA for a long time. There is obviously plenty to like about his game. He is an extremely athletic guard with the ability to swing between both backcourt positions and impact the action on both sides of the floor. However, it is going to take a while before he can be a marquee player on a good team. While he has the chance to be a that kind of player one day, it will have to be the right fit.

In a best-case scenario, Oladipo can hound smaller point guards and hunt for his own offense without having the responsibility of getting everyone else easy shots. For a 21-year old guard, he has excellent defensive numbers, averaging 1.5 steals and 0.7 blocks a game. The problem is, at 6'4 and 215 pounds with a 6'9 wingspan, Oladipo only has average size and length for a shooting guard. A guy like Lamb, with a 6'11 wingspan, can cross him up and shoot over the top of him like he's a chair.

In order to maximize Oladipo's ability, the Magic will have to pair him with a backcourt partner who can run the offense while also matching up with bigger shooting guards. There aren't many guards in the NBA who match that description, but there are two players like that in the 2014 draft. Dante Exum, a 6'6, 200-pound combo guard from Australia, looked like a future star in international play last summer. Barring an injury, he will likely be a top-5 pick in this year's draft. There's also Oklahoma State's Marcus Smart, who the Magic reportedly liked last year before he decided to stay in school.

Of course, if Orlando drafts Exum or Smart and lets them play with the ball in their hands, they become the franchise player and Oladipo becomes part of their supporting cast. That is the role that make sense for Oladipo. To use a really simplistic analogy, he is more Robin than Batman. There is nothing wrong with that, except for some of the expectations that have been thrust upon him.

If they don't expect Oladipo to be something he is not, the Magic will be happy with the player they have.