Clayton Kershaw, the Dodgers, and the impossible-to-evaluate extension

Share All sharing options for: Clayton Kershaw, the Dodgers, and the impossible-to-evaluate extension

I don't want to spoil the magic, but sometimes baseball writers mail it in. Not this column. This one took hours of careful thought. But when big news breaks, the reactions can feel familiar. Big contracts are like that. Here, refer to this flowchart. 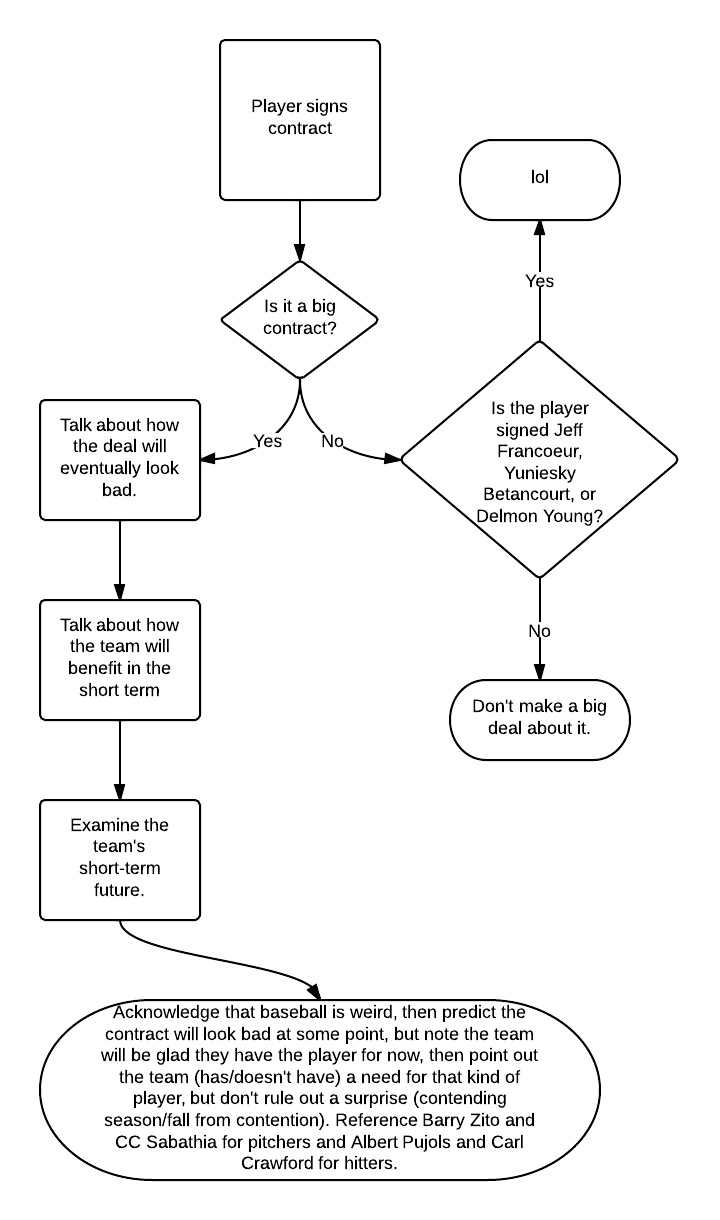 Here we are, then. Clayton Kershaw signed a big contract. Seven years, $215 million. It's the biggest contract ever signed by a pitcher. The biggest annual amount ever paid to a baseball player, even. Kershaw and Juan Uribe add up to a hair less than Albert Pujols, for example. The Kershaw extension is a gigantic deal, even if it's less than the rumored $300 million figure that was floated earlier the offseason.

The flowchart says the Dodgers will eventually regret this deal because it will limit their spending in the future, which … wait … this thing is useless. We need a new one for Dodgers transactions. 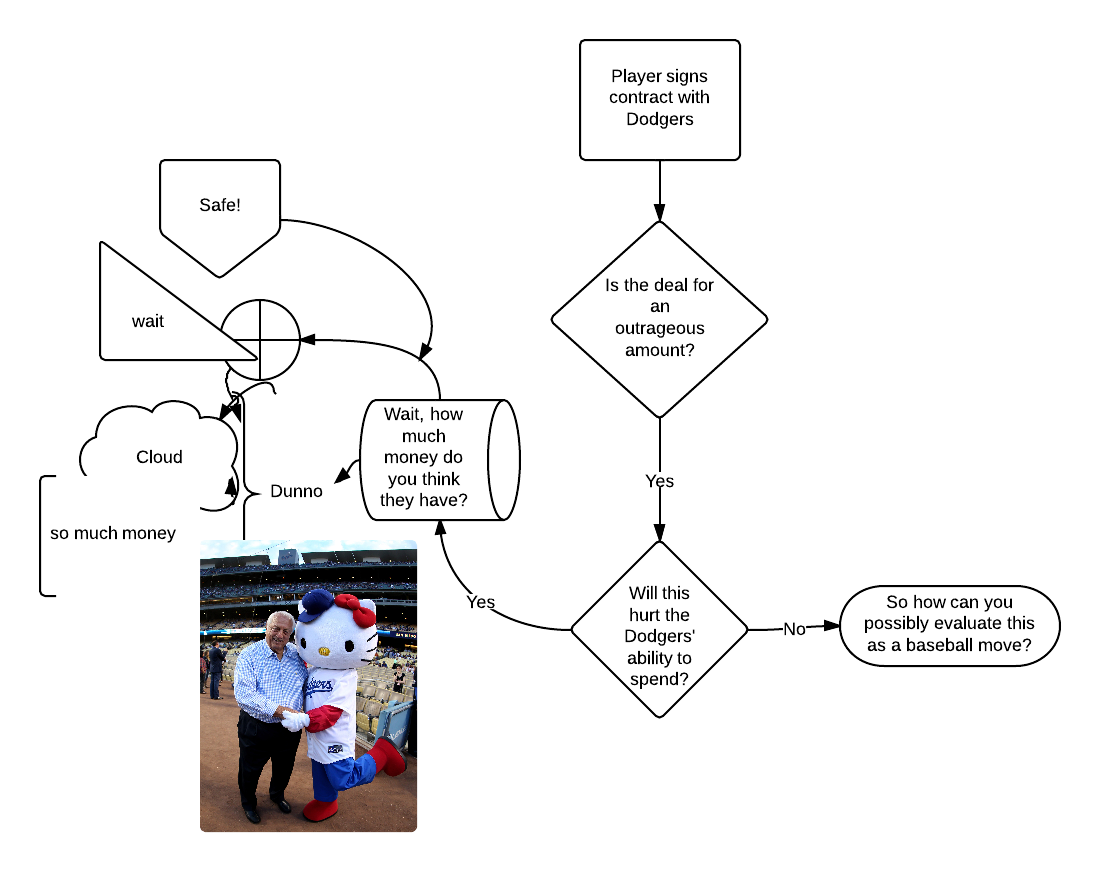 Much better. Because more than any other huge contract I can remember, the only possible reaction is "What do they care?" The Dodgers have committed close to a billion dollars in contracts to players since the new owners took over. What do they care? Very little at this point. And they broke the instant-contract-analysis flowchart.

When the Yankees traded for Alex Rodriguez, with the Rangers hilariously kicking in all sorts of money for the privilege of losing their best player, it was right to think they didn't care about Rodriguez's contract. But when they signed A-Rod to the blockbuster extension, with all sorts of milestone bonuses and bloated annual salaries, there wasn't a lot of "What do they care?" A-Rod wasn't a Greek dramedy yet, so it wasn't an obviously awful deal right away. But there was a lot of attention paid to the end of the deal, when Rodriguez would be approaching 40. Man, that's probably going to hose the Yankees by the end, right?

Every other analysis ends with that sort of prediction. Albert Pujols? Gonna be a mess at the end. Shin-Soo Choo? Probably won't be worth the money by the end. Prince Fielder? Just wait.

We need the first evidence the Dodgers have a limit before they're subject to anything close to the same contract-evaluation criteria as the other 29 teams. Maybe in 2016, when Kershaw is throwing 88, Zack Greinke can't find the strike zone, Hyun-jin Ryu can't stop giving up homers, David Price is forced into the bullpen, and Masahiro Tanaka gets a weird variation of Steve Blass Disease where he can't stop balking, the Dodgers will miss out on a premium free agent because they've already committed $130 million to a rotation that isn't doing much.

Yeah, none of that's happening.

If there's a perfect partner for the Dodgers, a team impossible to evaluate like a normal rich team, it would be Kershaw, a pitcher impossible to a evaluate like a normal ace. He's the same age as pitchers like Stephen Strasburg and Jarrod Parker -- players generally thought of as young and full of potential. Kershaw's that, except he's already the best pitcher alive, and he shows no signs of slowing, no red flags. He's the kind of pitcher a lot of teams would have gone nuts for. The Dodgers weren't the only team that would have given Kershaw that contract.

Did the Dodgers pay too much for Kershaw, or is he going to be the rare pitcher worth the massive contract? That's like asking this:

There's more information needed. If the Dodgers really don't care, or if they care but they haven't come close to the secret payroll limit yet, why wouldn't they re-sign Kershaw to a record-setting deal? It's the most obvious move in baseball history. The only way it's a bad idea is if it will prevent the Dodgers from improving the team in another capacity.

Check back in a year or five. Abstain from any big, bold opinions right now. The Dodgers aren't letting us have any just yet.