The Lakers are finally broken enough to be reborn

It's finally happened: the Lakers are horrible and have a lottery pick. They are totally going to be great again very soon.

Share All sharing options for: The Lakers are finally broken enough to be reborn

It's too early to tell, but he's having by far the worst rookie season of a top overall pick.

It's only January, but Wednesday's loss to the Suns felt like a stamp on the Lakers' season. The 121-114 defeat in Phoenix dropped L.A. to 14-25 on the season and was the fifth straight Lakers loss. The team's dropped 12 of 13 since landing at 13-13 on December 20. The Lakers' sole win of 2014 came against the Jazz, the only Western team with a worse record than L.A. right now. Amazingly, Utah is only 1 1/2 games behind the Lakers for No. 14 in the conference. Even the Kings have passed L.A.

As of Thursday, the Lakers are tied with Cleveland for the sixth-worst record in all of basketball. Which means that the Lakers are finally broken enough to be reborn.

2014 is a rare year in which the Lakers have their own first-round draft pick. L.A. had sent the Suns its 2013 and 2015 picks in the disastrous Steve Nash deal. A future pick (no earlier than 2017) is also going to Orlando from the Dwight Howard deal.

But 2014: That's the Lakers' pick. And it couldn't come at a better time. This rough, non-scientific chart shows why. 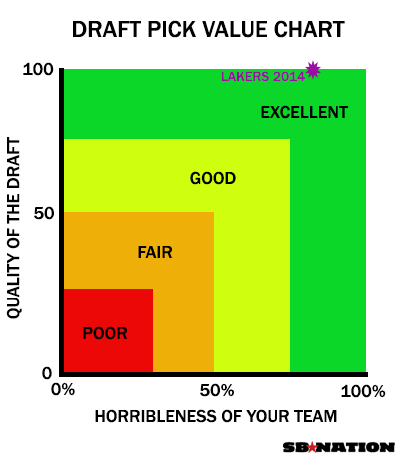 The Lakers picked the perfect year to stink. Of course they did.

But if things keep going like this, the Lakers don't even need lady luck to smile at the lottery. The Lakers are in line for the No. 6 or 7 pick, which should be really valuable this season too. Dante Exum and Marcus Smart (potential franchise point guards) are mentioned in that range. One of the bigger names, like Julius Randle, could slip.

Even in that rare occasion in which the Lakers are among the NBA's most embarrassing teams, they did it with impeccable timing.

Of course, the Lakers need more than just the draft to rebuild. Kobe Bryant will be around, thanks to that massive in-season extension he recently signed. If the Basketball Gods have mercy, they'll let Nash retire; the Lakers can use the stretch provision to soften any cap blow, or they can just eat it in 2014-15 and bleach that sign-and-trade from their memories (Seriously, the Nash sign-and-trade may go down as one of the worst in history, depending on who the Suns pick up with the Lakers' unprotected pick in 2015.) Other than Bryant and perhaps Kendall Marshall, is there anyone on the Lakers' roster worth keeping around?

Wednesday's loss to the Suns was, in a way, a telling mark of how dilapidated the roster has become. The Lakers don't even really seem like a team so much as a collection of mediocre players. Consider Nick Young's scuffle with Alex Len and then basically the Suns' entire roster.

Not a single Laker on the court rushed to Young's aid. Ryan Kelly, the rookie, was nearby and seemed to half-heartedly try to elbow in to help Young up after the hard foul. But once Young hit Len and the Morrisii pushed to the front, Kelly fell back. As Young is surrounded by the Suns, you catch a glimpse of the other three Lakers on the court slowly coming to the play, with no apparent urgency. Chris Kaman and Jodie Meeks finally arrive to the scrum once it has been broken up.

Now sure, Young's crusade against Len, the Morrisii and Goran Dragic was silly. You don't need to swing after a Flagrant-2, not in the second quarter of a close game when you've lost four straight and have a longer injury list than active roster. Nick Young did a silly thing, news at 11.

But not a single Laker on the court was interested in helping their silly teammate out when he was swinging at and surrounded by opponents. You don't have to love your teammate, but you at least have to pretend to be interested in his welfare. The Lakers were not.

The promise of tomorrow doesn't change the fact that today is tough to watch for Lakers fans.

Rare will you see a team so defeated as to be going through the motions in January, especially a team that has made eight straight postseasons. The 2012 Bobcats, 2010 Nets, 2009 Kings and 2008 Heat come to mind as the best examples of teams that gave up so completely so early. Those also happen to be some of the worst teams in NBA history.

What must be comforting for shell-shocked Lakers fans is that they don't just have a high pick in an incredible draft, but they also have the most lucrative franchise in the sport, an ownership group that has in the past committed to spend like a Premier League team, a market that supports such forays into the luxury tax, cap space galore, an attractive destination for stars and a damn good general manager. There are few GMs you'd trust this type of rebuild with, and Mitch Kupchak is at the top of the list. Not every move has turned into gold (see: Nash) but he's done this before.

Remember, once the Shaq era ended, the Lakers were in no man's land. Kobe was out there requesting trades, ripping Mitch and telling dudes in parking lots that L.A. should swap young Andrew Bynum for old Jason Kidd. Kupchak turned all that into the brilliant Pau Gasol trade and two championships.

L.A. is currently horrible. But to the dismay of Lakers haters like me everywhere, the team's next reign of terror is only a couple blinks away.