Don't talk about a man until you've walked a mile in his affordable, poorly cut pants.

Because we wanted to see what the fuss was all about, we went and spent this website's money to find out what it was like to wear another man's pants. A Harbaugh man's pants, specifically.

They were not $8. Let's dispel that myth: Based on local pricing and taxes, my pair of Jim Harbaugh Victory Khakis came to about $10 at my nearest Walmart. I found them in stacks in the menswear section, just around the corner from a Duck Dynasty standee and down the aisle from a huge pile of cold weather gloves.

The brand: GEORGE. That's the name of Walmart's men's line: Just, GEORGE, like the biggest, blandest man on the planet, whose goal in clothing is to "not be naked."

I had to find the closest thing to my size (36x30) in a 36x29. Even with a shorter leg, however, the legs flopped down onto my shoetops like harem pants. The waist was fine, and may be the best thing about a pair of Harbaugh Victory Khakis. It definitely comes somewhat close to a fit, and most definitely does not leave you walking around in your underwear.

The rest is a disaster. I have an ass, which, on the lunar scale, is a waxing gibbous moon. It's there, and even with that it's hard to say what a normal person would look like in these pants because there is a private Idaho in the hindquarters of every pair of George slacks. They are vast, and contain multitudes and possibly millions of tons of delicious potatoes. 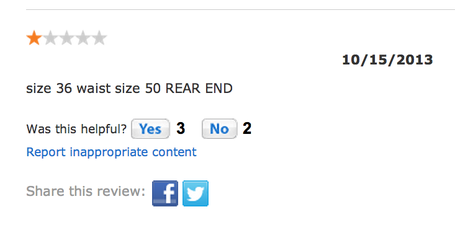 A person with an average-sized ass would disappear inside a pair of George Slacks, creating the ultimate in theoretical pants physics: Schrodinger's Ass. The legs aren't much better. Once I got them home, I put a soccer ball into them just to see how far it would get down the pants leg. It stopped just under the knee. George brand pants discriminate against those with soccer-ball-sized calves, so be advised.

After a three-month absence, Clarence BEEFTANK returns for the NFC Championship Game to humiliate the Seahawks, and to discover his very self.

Properly speaking, Harbaugh Victory Khakis are not even "pants." They are pantaloons: huge, billowy pajamas in disguise. The only advantage to them is that they come ready for stomping, spinning and other frantic coaching gyrations of the Harbaugh-type variety. If you were to call them a performance pant, you would not be lying so long as you were to say, "You can freak out like a wasp-stung toddler in them over a holding call in comfort." I twirled in them, and did not burst into flame or injure myself. They're quality twirling pants.

No. Just, no. There are threads sticking out all over the place, and the crotch would probably fray and explode after four or five washes. This is bad unless you are looking for a pair of pants that convert to crotchless. If this is you, please purchase a pair of George brand pants, and wait a month. The fabric is a 40/60 polyester-cotton blend, made by someone in Bangladesh who laughs at people who believe there is an ounce of cotton in these pants. This is the same fabric your uncle re-covers couches in before moving them to the garage to be lived in by rodents.

Deep. Oh, very deep. The harem pant effect is NOT helped by them at all, but dye them and you can give your pants to your friend the Civil War re-enactor for use on the battlefield. He'll try to give you hardtack in exchange! Don't eat it, hardtack is total crap.

It has them, but with this much room to starboard, port, bow, and stern, you can fit an entire ship's crew into these pants. Wear them, and become the cargo freighter of a man you always dreamed of becoming.

These pants pass the basic pants test. They do not fall off you, and are about $10. You could probably wear them for a month, and possibly longer provided you took special care they did not deserve. They're the Bengals of pants, basically: mostly mediocre, but exactly what you get for the money.

• Petty Tyrants: The Browns just want you to believe in them