Share All sharing options for: Where home runs look their best, part VI: #16-18

Welcome back to Baseball Nation's series of where home runs look the best. We're in the middle tier now, which means all of these parks are mostly outstanding. The ballparks highlighted today are all newer parks. Well, one of them is actually the 11th-oldest park in baseball, but that's more of a testament to Bud Selig's hard work and wrist-twisting than anything else.

And it doesn't have the pure, black nothingness of dead center:

But it has a lot going for it. There's an easily accessible upper deck in left, and there's a harder-to-reach third deck above that. Bullpens kind of spoil the fun in right, but there's an upper deck down the line and a bridge in right-center. The bridge makes for a good dinger landmark:

A unique feature that you can see well in that last homer is the auxiliary scoreboard in right. The home runs look pretty spiffy when they're high enough, mostly because they're set against the backdrop of an absurdly high Jumbotron that's not like something in any other ballpark. It's almost like they dug down into the earth to build the foundation of the new Citi Field, but they figured they didn't want to waste the scoreboard from the old Citi Field, so they slapped some girders around it to keep it stable. 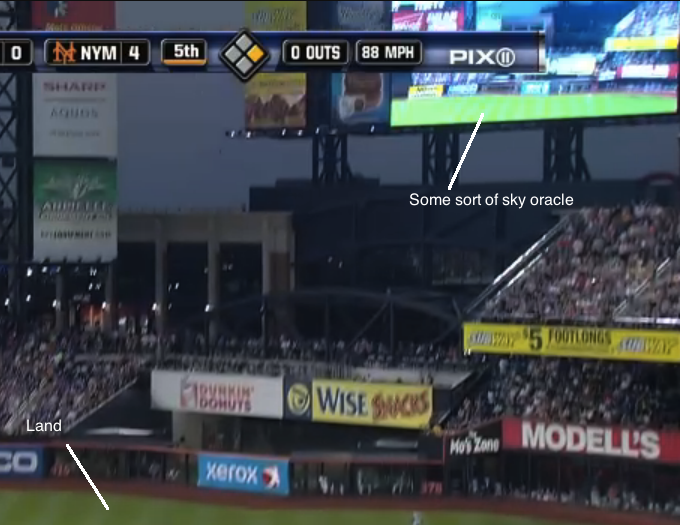 The reason it ranks above Safeco though, the real stupid reason, is that stupid apple. It lives in a hole in center field, and it emerges for every Mets home run like some sort of engorged … whatever, look, it's an apple that emerges from its apple sheath and returns to its apple hole, and when you see its shadow, you get up to six more months of Mets baseball. And I love it so. There's no accounting for taste, and there's certainly no accounting for familiarity. But dingers in Queens mean an apple, and help me so, I love that apple.

The longest homer of the year at Citi, in case you were wondering:

It has to travel over some sort of party deck, a middle deck, and Carlos Marmol to get into the upper deck. That's solid, if unspectacular. It's mostly the bridge and the dippy apple. Which is enough.

It's rare that you can tell a park's home-run enhancement from a quote rather than a video. Here's Jeff Brantley with a quote that, even taken out of context, lets you know that GAB has something unique going on.

That ball almost went in the bathrooms of the Pilot House.

Quick, pick another sport where that sentence would make sense. And it wasn't hyperbole; if some whistlin' fool ambled out of the bathroom at that moment, satisfied with a job well done, he or she could have met an untimely demise. It's from this Todd Frazier blast, which was the longest at GAB this year:

Is it silly to have a fake steamboat in center field? Well, yeah. It's functional, sure, but still silly. As a reward for hitting the longest home run you might ever hit, though, it does outstanding work.

These rankings, though, are riddled with unmistakable personal biases. About 90 percent of the games I watch are Giants games, which means my baseball-watching experiences are colored heavily by a specific team. And when I think about my experiences watching home runs in various ballparks, the first thing that popped into my head was this:

Sorry. Sorry. That got out of hand. The point is, baseballs look outstanding when they travel into the upper deck in left. The right field is unique, too, with a setup that's almost reminiscent of high-school bleachers, and not in a bad way. There's nothing above them or to either side. You can certainly picture Jeff Samardzija smoking a cigarette and listening to Exodus on a boombox under those bleachers. They also allow for the batter to hit one completely out of the stadium.

Don't just sit there and talk, Brennaman! Help get that baby out of the Ohio River, for the love of all that is holy!

All in all, a quality park for homers, even if it's the second best in Ohio …

This aggressive ranking probably has a lot to do with the Indians of the late '90s, who are probably still batting right now against Brian Moehler, in an inning that will outlast us all. But there are a lot of nice dinger-related features, too. I enjoy the way the homers look as they go down the left-field line, for example.

It's a nice, high wall with easy-to-clear seats. The center-field is underrated because of the pleasant batting eye, made from well-manicured trees. Actually, it probably can't be underrated if no one's ever rated it, but it seems like something people would ignore. Don't! It's rather nice. Here's what it looks like when someone puts a ball over said trees:

There's also a pleasing CLANG when the ball hits off something back there. Almost makes up for the nonsense coming out of Jeff Brantley's mouth around :29. Almost.

Let's see how the stadium handles a memorable, ridiculous home run, though. That's always the best litmus test. While researching this series, I've realized the natural enemies of the impressive home run are the ballparks that swallow 480-foot homers in maws of endless benches and seats. Jim Thome hit a 511-foot homer in 1999, which was impressive enough to warrant a statue, eventually. How did the ballpark handle the home run?

It went out of the stadium. That's a key component for any ballpark's HR♥+ metric.

Progressive Field has a couple more strong points, too: high walls, an accessible upper deck, and the ability to wing people in line for foodstuffs. The biggest problem I have with Progressive, and it's nitpicking, really, are the left-field bleachers, which do exactly what I complaining about earlier. It takes an unreasonably silly home run to hit the scoreboard. It's happened only once in 20 seasons. You can probably guess by whom.

An aside: That kind of stuff is why I want Mark McGwire in the Hall. The stats make him a candidate, surely, but it's impossible to explain him without videos like this. Even before '98, people stopped what they were doing to watch McGwire's at-bats. Stop-what-they're-doing quotient is a terrible standalone stat for the Hall, but when you combine it with a statistically borderline candidate like McGwire, it's more than an adequate tiebreaker.

So even though I'm keen on docking ballparks for having endless bleachers, all it takes is one guy to show the ballpark's potential. You can hit it off the scoreboard in left, everyone. McGwire did it. He's country strong, they say, just a meat-and-potatoes power hitter. Once he proves it can be done, the ballpark becomes that much more enjoyable for dingers.