Greg Oden is getting there

Greg Oden is active for the first time in more than four years. It's still a long way from being the player he was expected to become, but it's a long way from where he's been.

Share All sharing options for: Greg Oden is getting there

At bottom, every card in every set of trading cards exists to pad out the packs and so ensure the scarcity of those cards with valuable faces and signatures on the front. It's not for nothing that collectors call these cards "commons." My job, around the time that Greg Oden was setting up to be either the first or second pick in the NBA Draft, was to write words that would go on the back of those discardable cards.

I got to write the valuable ones, too, although of course there were fewer of those, just as there are few Greg Odens and Kevin Durants seeded in among us. Of all the tiers of increasingly elusive parallels -- red border, gold border, printed on wood or with little refractors on the image -- built into each product, the most valuable and rare were the ones that most closely resembled the subjects: The one-of-one's, the only of their kind.

Get news, links and Ziller's #hottakes with Good Morning It's Basketball in your inbox every weekday morning.

So consider this a confession: I am why so many of the Topps rookie cards that were printed around then have a strictly unconscionable amount of alliteration and, let's say, ambitious metaphors. I write like that, but also these are just things you have to do if you're writing a dozen or more rookie cards for Yi Jianlian or Acie Law IV or Adam Haluska. Or, for that matter, Greg Oden, who was at that point still superhuman, and a player with whom Topps had a rich, exclusive autograph contract. There are only so many things to say about even a personable basketball immortal in his late teens, and a relatively small amount of what's interesting is also appropriate for (or fits onto) the back of a basketball card.

I tried to approach the task with a sort of reverence. The cards were just cards, all of them tending toward the "common" in the long run, but they were also collectibles and keepsakes and artifacts. That, and something like a stock certificate: Mostly an emotional investment for collectors, but still things one acquires and holds, and that represent a share of something, and whose value depends on that relationship. Everything fluctuates, everything changes.

You know all this, and you know how the Greg Oden investment has worked out. So what am I doing with all these cards I wrote for him, and why are they still stashed away, safe and sound in their protective cases? 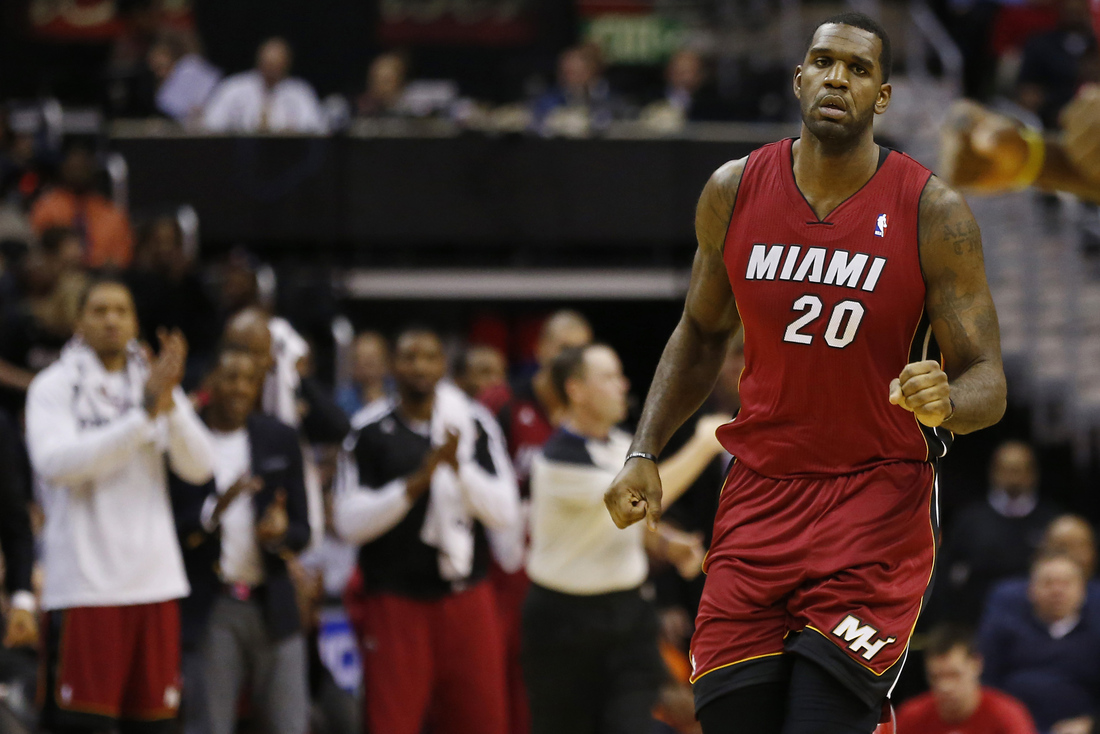 Here is a definitionally non-essential basketball play, from the first half of a lopsided January game between the defending NBA champions and a team with a losing record. The champions are losing and their fourth-string center, recently promoted to third string by the trade of another backup and then to second string by fleeting circumstance, is in the game. So:

As it turned out, Greg Oden played really well throughout his first eight minutes with the Heat, which were also his first eight minutes of NBA basketball in 1,502 days and nights. He dunked (twice, actually) and he rebounded and played with a command and athleticism that backup centers do not ordinarily display. He looked like Greg Oden in part because no one else really looks like Greg Oden: Craggy beyond his years and oddly sorrowful-looking in repose, Oden had the face of a 104-year-old sage even when he was a happy 19-year-old All-American, before basketball was his job and he became basketball's Job. But also, albeit in a few unrepresentative minutes of early-onset garbage time, he looked like Greg Oden.

There was a sort of sad-o cottage industry on the basketball internet over the four years that Greg Oden spent mostly not playing basketball that centered around sad pictures of Oden. There is one in particular that was passed around robustly, taken at his last media day with the Trail Blazers, in which Oden is in uniform and stooped over a pair of crutches. There's nothing much to say about it, besides that Oden looks pretty bereft. That image, or some variation on that image -- Oden looking on in a big-and-tall suit, Oden writhing and clutching, Oden in a gym or cold tub or elsewhere on his long and detour-choked Road Back -- has been what Oden looked like for a great many fans for quite some time.

There are reminders on YouTube of how good Oden was during his one year at Ohio State, although even they are retroactively abstract. There's a decent video set to an incongruous Trick Daddy song; another shows him flashing some similar skills in the NBA. There's also a sort of anti-highlight video of Oden getting hurt set to Kansas' "Dust In The Wind" that is inestimably less tasteful, but which fits better within the general Oden Discussion. The other players in the highlights are ones we know well as youngish NBA stars. Mike Conley Jr. throws the alley-oops, Joakim Noah and Al Horford and others absorb the damage Oden deals out. But the bounding figure at the center is not familiar. That is also Greg Oden, towering and altogether too strong, too astute and too brutally dancerly in the post, closing distances vertical and horizontal on defense in ways that are frankly unfair.

Oden is still just 25 years old, but those first eight inconsequential minutes with the Heat -- and even his less effective minutes in his second game back -- were a reminder mostly of how much Oden the player had disappeared into abstraction during his time away. It's to the point where Oden doesn't even necessarily come up in the discussions of first overall picks who busted. He's in a special category and is imagined most vividly now in those familiar still photos, grim-faced in some purgatorial gym, limping through the period between the last injury and the next one.

Because of all those cards I wrote, I have a great deal of Oden information lodged in my head, still. My favorite of these was that Oden wanted to be a dentist growing up. "But then I started to get big," he told ESPN's LZ Granderson, "and realized that my hands were so big, I'd kind of scare the little kids away." A much shortened version of it is on the back of the card I wrote for Oden in the 2008 Topps Luxury Box set. I built more than a dozen Oden cards out of similar trivia and snatches of stats, many of which are still stuck in my mind. It wasn't until I watched him do it again that I realized something strange.

I barely remembered what it felt like to watch Greg Oden play basketball. 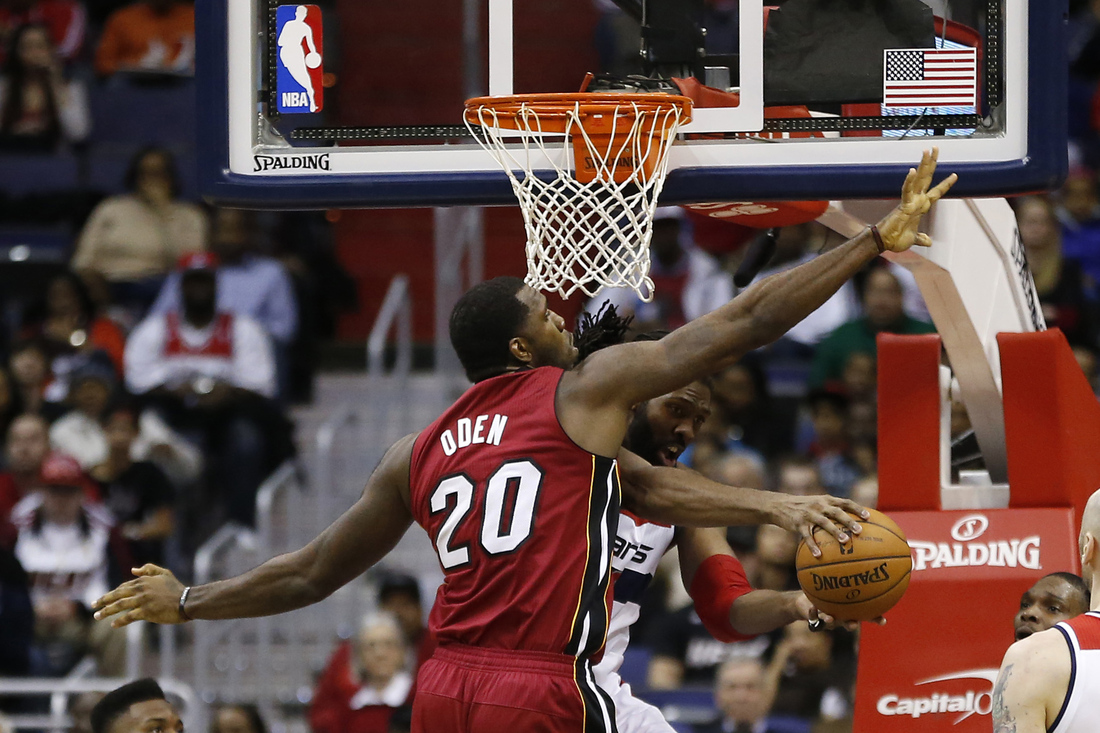 There is a chance that Greg Oden could play like Greg Oden again. While it would be something like miraculous for his old athleticism to emerge from the wreckage of three microfracture surgeries and one entire presidential term spent away from a difficult game, miraculous has -- in the relatively recent past -- been a word regularly used to describe Oden. It would be a singular and unique achievement, but he has been a singular and unique player.

But it's likelier that, if he can play long enough and well enough, we'll get to know a new Oden. When Oden's body first started to break, it became clear that he would not be the sort of first overall pick who gives fans what Kevin Durant does -- the fantasy of athletic effortlessness and grace without flaw, without range or limit. It's worth remembering that Oden was, when he was whole, absolutely that good, and his abilities made the game seem every bit as easy and light as Durant's do. But then it's worth forgetting about that, because Oden's future in basketball, if his body finally allows him to claim it, is as a more complicated and human thing. He is and likely will remain a player who shows us not how easy this difficult game can look, but who reminds us how surpassingly difficult it can be. As strange as it must have been for Oden to "get big," circumstance and fragile flesh have made him small.

Oden will never be common; he wasn't born for it. But he's human, and his struggle is too.

As a godly body in motion, Oden could have and would have been admired and awed-at, if everything had broken the way it was supposed to. But everything broke and fissured and strained, all at once and then in rapid succession, for years. The ex-god's body is human, his weary face finally matches his circumstances, and Greg Oden is back on earth. Oden is broken enough to enable a different sort of response, now. Not a vicarious experience of his effortlessness, but a projection of his effortful struggle onto ourselves. He's defined, now, by this ongoing, stubborn fight to regain the realm of thin air that was once his to rule.

Oden will never be common; he wasn't born for it. But he's human, and his struggle is too. It is not just nice, but maybe also necessary, to believe that his last card hasn't been played or written just yet.

• Ziller: The 7 most desperate NBA teams at the trade deadline

• Flannery: This is Rajon Rondo's challenge