Anthony Calvillo, quarterback of the CFL's Montreal Alouettes since 1998, announced his retirement Tuesday. He leaves the game with 79,816 career passing yards -- perhaps a higher number than any athlete has accumulated, in any stat, in any sport.

Anthony Calvillo's retirement caps his career passing yards total at 79,816. Nobody in the CFL has passed for more yards. To draw the curtain back, nobody in professional football has passed for more yards. We can keep drawing the curtain further and further out until it's ripped off its fixtures and dragged out into the alley behind the theater, where Willy Loman is smoking a joint in costume. Eventually, we arrive at this: it seems as though no athlete has a higher number in any category in any sport. 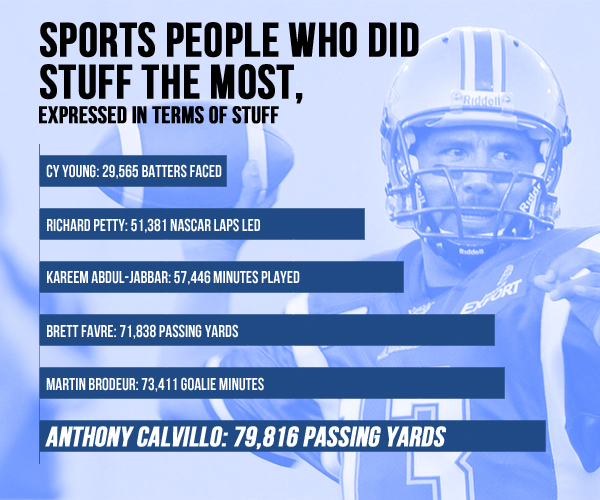 It's entirely possible that the likes of Cy Young threw more than 79,816 pitches, or that Rickey Henderson stood naked in front of a mirror and repeated, "Rickey's the best," more than 79,816 times. In terms of stats we actually bother to count, though, I'm unable to find a higher number in any of sports' statistical categories. (If you can think of one -- again, something statisticians actually bother themselves with -- please let us know in the comments.)

Calvillo is perhaps sports' grand champion of stuff did, and he did the stuff at the margins of America's sports consciousness. Those first few passing yards happened in the strangest place: after going un-drafted by the NFL, he joined the Las Vegas Posse. It was a Canadian Football League team, and by most accounts, Las Vegas is not in Canada. It was so not-in-Canada, in fact, that the lounge singers they dragged in to sing the Canadian anthem didn't even know how it sounded.

That was where sports' biggest number was born. The Posse closed up shop after only one season, and Calvillo spent three seasons with the Hamilton Tiger-Cats before signing with the Montreal Alouettes.

In Montreal, Calvillo evolved into perhaps the greatest quarterback in CFL history. He helped win three league championships for a team that hadn't done so in a quarter-century. Between 1998 and 2013, he threw for 398 Alouette touchdowns, was named an All-Star 10 times, and was put on a postage stamp.

Like the vast majority of American football fans, I saw virtually none of it. I finally had the chance to watch the Als in person a couple times, at the tail end of Calvillo's career. I last saw him in July, when Montreal hosted the Calgary Stampeders. They played in Molson Stadium, and like the three-down football, the rouge, and the presence of Troy Smith, it was a beautiful curiosity for someone raised on American ball. It's nudged against the side of a mountain, and right in the middle of the city; one can step on a bus 200 feet from the end zone.

It isn't "Football, Junior." It isn't the Canadian answer to American football. It's completely its own animal, and it produces things American football does not. Anthony Calvillo, nearly 41 years old and in one of the final games of his career, looked fairly bad that night. The Stampeders were getting to him, he missed several wide-open targets, and the Als lost, 22-14.

But that night, he kept building that giant number, as he had for nearly two decades. Sports are about the doing of stuff and the accumulation of numbers. It doesn't matter that he did this stuff hidden away where you didn't see it -- or, just as easily said, that you were too hidden away in weirdass America to see it. It's over, and we missed the most stuff any athlete ever did.