Share All sharing options for: The blown calls in baseball history that instant replay wouldn't have fixed

Instant replay is a good thing. Arguing against it is like arguing to keep beers without easy-open tabs. Almost no one wants to go back to the way it was. Even the professional contrarians hated church keys.

That doesn't mean it's a panacea, though. There will be blown calls that are made worse by instant replay. As Jayson Stark puts it:

When you have replay, fans expect you to get 'em ALL right

It's pretty clear what happened after reviewing the replay. Tim McCarver even says "And this might be the best thing for instant replay in baseball that's happened and occurred this postseason," as only he can. Except, here's the list of reviewable plays, according to the MLB press release:

The following play types will be subject to review:

All other plays will not be reviewable; however, the Umpires may still convene on the field at any time to discuss the play.

Dropped third strikes -- or caught third strikes -- are not on the list. If there's anything that addresses the Pierzynski call specifically, it would be the "trap play in outfield only" bullet. To be fair to MLB, caught/dropped third strikes would be exceptionally hard to review using video replay. The catcher's mitt often gets in the way of the camera, and if anything, that kind of call has as much to do with the audio as it does the video. They aren't always as clear as the Pierzynski play.

But imagine Pierzynski scoring the winning run after seeing the replay 1,000 times with a replay system. There's always a chance the umpire would have gone rogue like Frank Pulli to get the call right. Most likely, though, that non-strikeout wouldn't fall under the domain of reviewable plays.

This isn't exactly a surprise for a list like this because it's not like there was a lot of mystery to what happened. There wasn't a bang-bang play or a trap that happened 140 feet from the closest umpire. It was a judgment call. A split-second lousy judgment call, but a judgment call nonetheless. And those aren't reviewable. Heck, some goofballs argued the call was correct.

It was, in Sam Holbrook's judgment, a play that a shortstop makes with ordinary effort. I'm skeptical that any play from a shortstop in medium-left will ever be ordinary effort, but if Pete Kozma clanked the ball -- closed his mitt too early, say -- would he have been charged with an error? Probably. So maybe there's something to the argument. Enough to make plays like this non-reviewable forever and ever.

This one is stretching it. But one thing you never see with the Meals play is a definitive angle. You get still shots like this from Getty Images: 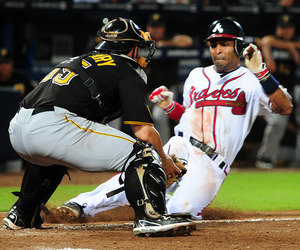 I'm pretty sure I see Michael McKenry's glove move. You're pretty sure you see Michael McKenry's glove move. But if you're an umpire, with the game on the line, do you see enough to overturn the call? If you're looking for an example of a gun-shy ump who isn't sure about his own eyes in a situation like that, don't forget about Angel Hernandez. That play was 100 times easier to call than the Meals play, even if the Meals play was pretty easy to call.

Football's replay system is filled with plays that stand because there's no conclusive, indisputable replay. There will be plays like that in the 19th innings of the future. They will stand. You will throw things. The Meals play would probably have been one of those plays.

Turns out Ed Armbrister wasn't a Pynchon character, but a part-time outfielder for the Reds in the '70s. And on this play, he just kind of hangs out at home plate, just soaking it all in, you know? The World Series, man, the World Series, the stuff of childhood dr … what, run? I should run? Oh, okay.

Carlton Fisk fielded the ball, was interfered with, and zipped the ball into center. Even if President Ford called and asked the umpires to review the tape, though, the play would stand. Review the bullet points up there and look for something that would apply to the Armbrister situation. There isn't.

By extension, this means the Middlebrooks play from the 2013 World Series wasn't reviewable either, which upsets me less because that was called correctly. But if you're looking for another judgment call that would make you set a car on fire if it weren't overturned …

There would be a GIF within five seconds of this play. You would watch it until your eyes leaked pudding. And at no point would it have looked like Kent Hrbek was doing anything but being a putz. Like Armbrister's obstruction, though, it wouldn't have been reviewable.

To be honest, I'm not sure if there are enough opportunities for fielders to do this to write it into the replay rules. At least, there aren't many opportunities that will also allow the fielder to get away with it in front of the umpire. When it happens, though, and you can clearly see it should be overturned according to the laws of the universe, you will be annoyed and/or violent when it isn't overturned according to the laws of baseball.

It applies to the call that wasn't made against Reggie Jackson in the '78 World Series, too.

That one made Tommy Lasorda hilariously upset, though, which is the main reason they wouldn't have overturned the call.

You knew that balls and strikes aren't reviewable. And that isn't even a Major League Baseball game. I just like using that GIF whenever possible.