I saw Carlos Valderrama play for the Tampa Bay Mutiny sometime between 1999 and 2001. (It was Tampa, and there were not many things for adults to do besides get DUIs and ride bicycles to avoid getting the second DUI.) Valderrama was on the long downswing from his peak as a professional football player. He was fat, and barely moved when another player had the ball. When the Mutiny eventually swung the ball his way, Valderrama did little more than a Cupid Shuffle with the ball, moving to the left, then the right, and then kicking it somewhere else with the deft, tired touch of an exhausted, paunchy jock toying with young and hopelessly untalented lessers.

He was a giant nuclear dandelion of hair beneath a nylon-encased bolus of high-quality bistec and South American beers picking up paychecks, and nothing else.

Soccer has a long tradition of this: the wind-down, the meal-ticket finale to a career in leagues less demanding than those the star made their serious Pagani Huayra money playing in for years. Beckham's route went through MLS, Pele's went through the New York Cosmos, and on a lesser but still lucrative level, Valderrama's long, flush downhill ran through the Tampa Bay Mutiny.

Football players never get to slump elegantly into middle age.

That is not how American football works, at all, at any level. The career arc of most football players follows a graph cut off at the margins: a final season, a last rush at a title, and then maybe a tearful moment when the topknot is cut off, and their career as a football sumo ends. There are some exceptions. Maybe it stutters along like Brett Favre's five year farewell tour. Perhaps it just ends with a virtual disappearance, as it did with Barry Sanders and his fuck-you retirement sent to the Lions, presumably written on a piece of paper cut out in the shape of a hand with middle finger extended towards Wayne Fontes.*

Barring these instances and the Ray Lewis 2012 Memorial Tour, football players just vanish from the field of play like lost pilots into the ether, retreating to a world of car dealerships and celebrity golf tournaments. At no point do they get the chance to be what old golfers get a chance to be on the Seniors Tour, or what soccer players get to be while they're strangling the pocketbooks of minor circuit managers for their vacation home mortgages. Football players never get to slump elegantly into middle age.

There may be a few exceptions, though. Kickers like Morten Andersen brave the world of spandex well into their fifth decade. Occasionally a backup quarterback makes it into his forties, like another Tampa regular Steve Deberg. Jon Kitna made news simply by signing with the Cowboys this year at the age of 41. That news seemed to be less about his age, and more about people's morbid curiosity about this: what would Jon Kitna shatter into if hit at the age of 41 by an NFL defensive end running at full speed? I like to think he'd turn into thirty smaller Kitnas, and scatter to live in the bowels of Cowboys Stadium like the NFL's own bald version of the Keebler Elves. They would bond together to torment Jerry Jones, and undermine every one of his successes.

Peyton Manning may be that other notable exception to the rule. After doctors fused together a spot in his cervical spine held together by gummi bears and packing tape in 2011, Manning couldn't lift a three pound dumbell with his throwing arm. In the 2013 football season Manning has thrown for 55 touchdowns, his career high, and led the Denver Broncos to the Super Bowl. He has thrown for more yardage this year per game than at any point in his career. Boggling stat goes here; another boggling stat goes here, outlined in bold and painting a portrait of statistical accuracy aberrant to even the world of robotics.

This is Peyton Manning's Super Bowl build-up in the media so far: 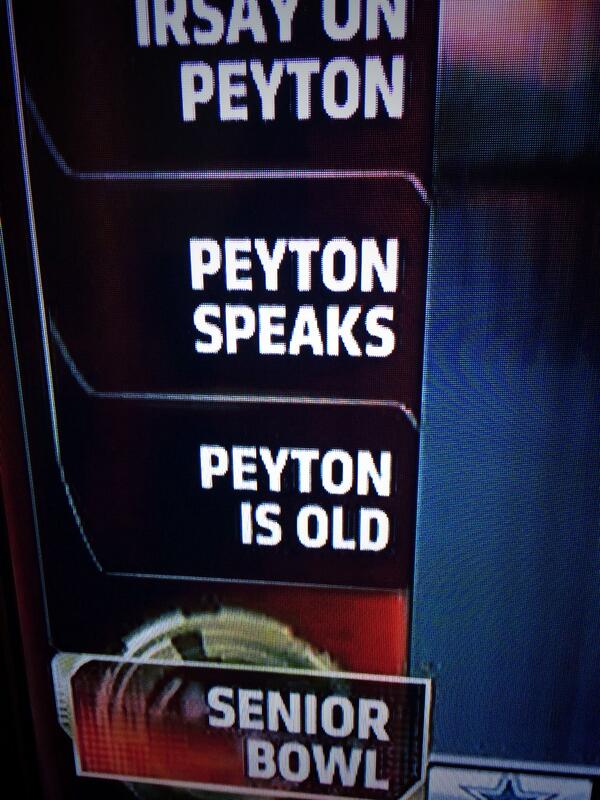 They're not wrong: Peyton is old, and not lacking in tributes. (SI's Sportsman of the Year has received enough media compliments, and he's on that Papa John pizza cash. HE'S FINE.)

The old man angle of his game is another matter altogether. Manning is now so much more finesse and brains than outright skill, an old knuckleballer with a jersey loaded with vaseline and nail files. His passes coming out of his hand can, at times, scream interception at the release point before whispering safely into a receiver's arms at the completion. (Go to the :57 mark here and watch a floater pass through a defender's back like a video game glitch into Wes Welker's hands.)

Some 37-year old MMA fighters on TRT look like diesel faceripping demons, and that? That is totally not Peyton Manning in 2013. Peyton Manning looks old, and like the things he does are hard and require effort. He runs and throws like a dad on a flag football team, and it looks as difficult as most athletic things done by older men should.

Correction: like a dad on a really, really good flag football team, one good enough to get on the cover of Dad Magazine, and the one that eliminated your team from the local playoffs for the fifth year in a row. It's sad that we don't get to see football players on the downhill run get their easy paychecks playing in the Senior Flag Football League, touring their way through the Tri-Cities areas of America and waddling around the field like bored, retired ninjas. There's something beautiful about it: an athlete hopefully just playing for play's sake alone, and not for overdue child support payments or to recoup whatever their horrible financial advisor cost them in the last contract.*

*Inevitably, some would be playing for exactly these reasons.

It'd be fun to watch Peyton Manning do exactly this farewell bonus tour were it not for one thing: it feels like Manning is already doing just that. Without an MLS to turn to, he simply made the NFL his own custom junior league. Manning is already being paid good money to play his farewell tour against inferior competition--in the NFL, in the year 2013, all done at the highest level of the sport at high speed in a body given up for done just two years ago. Peyton Manning is the self-repairing machine, a quarterback who put up the same production or better late in his career after rebuilding himself. His farewell tour could be his best statistical season played at the very least to the limit of a conference championship, and perhaps a Super Bowl to end it all.

And unlike a lot of aged soccer gods picking up their bonus checks, this is not tinged with some kind of grim acceptance of mortality or vague sadness in the face of a fallen icon. Peyton Manning in 2014 is something very different, something very far from pity. Two years removed from your sympathy letters, Manning is not just the dad-rock quarterback: he is now the football equivalent of the world's meanest dad. His neck doesn't work, and he's wearing everything sold in the orthotics aisle to the game. (He even tried to tell you this years in advance.) Contrary to all those nice commercials he makes he is not the kind of dad who lets you win anything, much less a football game.

• Stephen White: The Seahawks and the value of hustle | Denver's lessons

• Richard Sherman on his controversial interview, being called a "thug"