Lance Berkman and the Hall of Fame: an argument based on ignorance

I didn't do any research because I wanted to see if Lance Berkman just felt like a Hall of Famer.

Share All sharing options for: Lance Berkman and the Hall of Fame: an argument based on ignorance

I don't know if anyone has any fiery Lance Berkman opinions. I don't think people will rally around Berkman for the Hall of Fame like they did with Bert Blyleven or still do with Tim Raines. This isn't a hot-button issue. This is a button issue. As in, do you like buttons? They seem okay. What about snaps? Do you have strong opinions about Velcro?

It's also something I've never thought about. At least, I can't remember thinking about it. Is Lance Berkman a Hall of Famer? Well now, I've wondered that about Todd Helton and Albert Pujols, Kevin Brown and Roy Halladay, but never Berkman. He's officially retired. This is a rare opportunity. I get to ask if a player is a Hall of Famer with a tabula rasa. The rules: 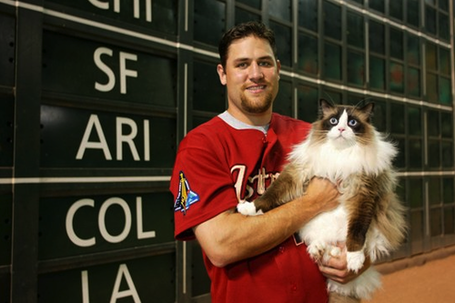 Rules are rules. This is something of a thought experiment to see if I can justify Berkman as a feels Hall of Famer. Does he feel like someone who seems like an instant Hall of Famer now that he's retired? I won't do any research. This is all feel. I don't get this chance very often.

I'm going to guess he was a career … .290 hitter. With 460 home runs. Did he reach 500? Seems unlikely that I'd forget that milestone, but it's not like I have time to watch baseball. Too busy with the hot takes and knock-knock jokes. No, i'll go with the under on 500, but with a number that's still impressive.

The reason we're here talking about this, though, is that sweet, sweet OBP. Lance Berkman made far fewer outs than his contemporaries, and he did it with the threat of serious power from both sides of the plate. I don't know off the top of my head if he finished with an OBP over .400. Probably not. None of them do, really. But he was still outstanding for more than a decade. Not good, not passable. Outstanding.

I'm assuming that WAR says he fielded like he was wearing a hazmat suit filled with ball bearings. That probably isn't going to help his cause.

The Jim Rice metric. And I can say, as the fan of a National League team that didn't have Berkman, that he was a completely abhorrent individual when he was in the on-deck circle. Just a total ass, leering at you, waiting his turn to take a walk or hit a dinger.

He was feared. Yes, as much as Jim Rice. Rangers fans still wake up because they think Berkman is in their linen closet, and he was in his late 30s when he scarred them like that. Then after ruining their everything, he signed with the Rangers and stole their money. He wasn't just feared as a hitter. He was feared as a master criminal. That's Heisenberg stuff, right there.

None? Probably a couple high finishes. I can't remember a Rookie of the Year past Buster Posey in 2010, so maybe he had one of those.

Did he have that special moment? Or was he responsible for introducing baseball to Estonia? Was there a surgery named after him? Did he do anything cool? Is there a picture of him with a big, fluffy cat that looks like it's getting his temperature taken with a cactus?

Perhaps. But more importantly, Berkman is unquestionably one of the best switch-hitters in baseball history. I'm not sure what kind of extra credit you dish out for that. It seems like a neat factoid, but Ted Williams wasn't a great switch-hitter. He was just a hitting god. Should he get penalized for not being a switch-hitter? No, that's ludicrous.

Yet I still can't shake the idea that Berkman being one of the best switch-hitters of all-time means something. It's a short list. Eddie Murray, Mickey Mantle, Chipper Jones, Lance Berkman. Right? That's the Rushmore of switch-hitting, and that can't be totally overlooked. It's a neat little fact that might actually mean something.

I went in with an open mind, and I was convinced by the end. Hall of Famer, at least by my admittedly loose standards.

Now for the big reveal. His actual qualifications:

There you go. Probably a deserving Hall of Famer if you're a big-Hall person. Won't get in, at least not through the regular channels. Who knows what the kinds of people on the Future Space Veterans Committee of 2048 will think? Until then, though, he will be a Larry Walker. A button issue.

Oh, certainly. With a muscly physique, even. Which means he should be shamed and shunned until he confesses his crimes. If he doesn't confess, that probably means he's guilty. This should make a difference. I wonder if he would float if you tied him to a boulder and threw it in the river ...

For more on Berkman's retirement, please check out Crawfish Boxes