It's good to be back, internet! Since the last time I made you all a meal, I've gone through back surgery and rehab, and watched my beloved Broncos march all the way to the Super Bowl. Now that the day is nearly upon us, I wanted to come back with a dish strong enough for the big game. During my break, I knew that I wanted to make you tacos. Why tacos? Simple; the internet loves them. And if there's one thing I can't stand on the internet, it's joy and adulation.

How do you make a taco better than it already is? Well, to mull this over, I drove down to my local Taco Bell and surveyed the menu. Oh sure, you could get your beefgrits in triangles, or cylinders, or even pressed octagons. But I noticed that with each meal came a gigantic photo of a Mountain Dew. Soon, an idea came to me. Why not infuse that energy into the food itself? Why not make caffeinated tacos?

It wouldn't be Spillyfood without thematic ingredients, so I've put in the flavors of the Broncos and Seahawks into this dish. First, let's begin with the basis of any good dinner: 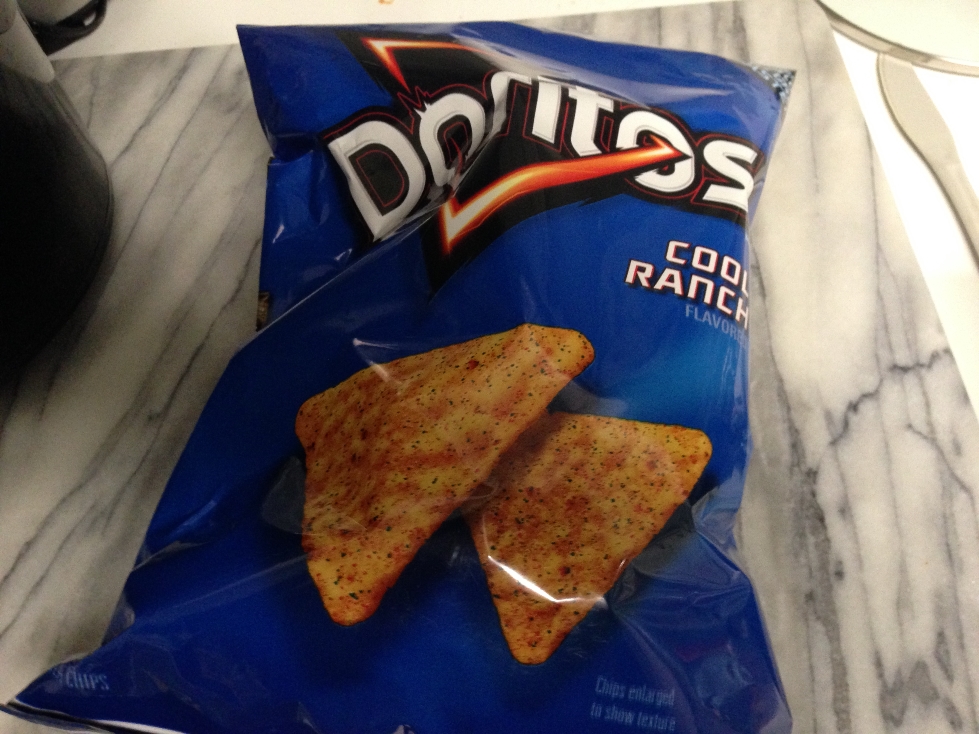 Everything you need is there; our vegetable quotient is taken care of with green and red flecks in the seasoning, and the chips themselves will add a bit of weight to our meat.

Oh, right, I forgot to tell you; we're making the meat first. Who would use Doritos as a shell? That's crazy talk, and internet food is serious business.

STEP 2) Throw the chips into a slow cooker. I know I'm famous for microwaving everything but this meal needs time and special care. In addition, it lets us gather up the ingredients we need and lets the flavors simmer and mingle while we make the taco shells. What goes into our taco meat? 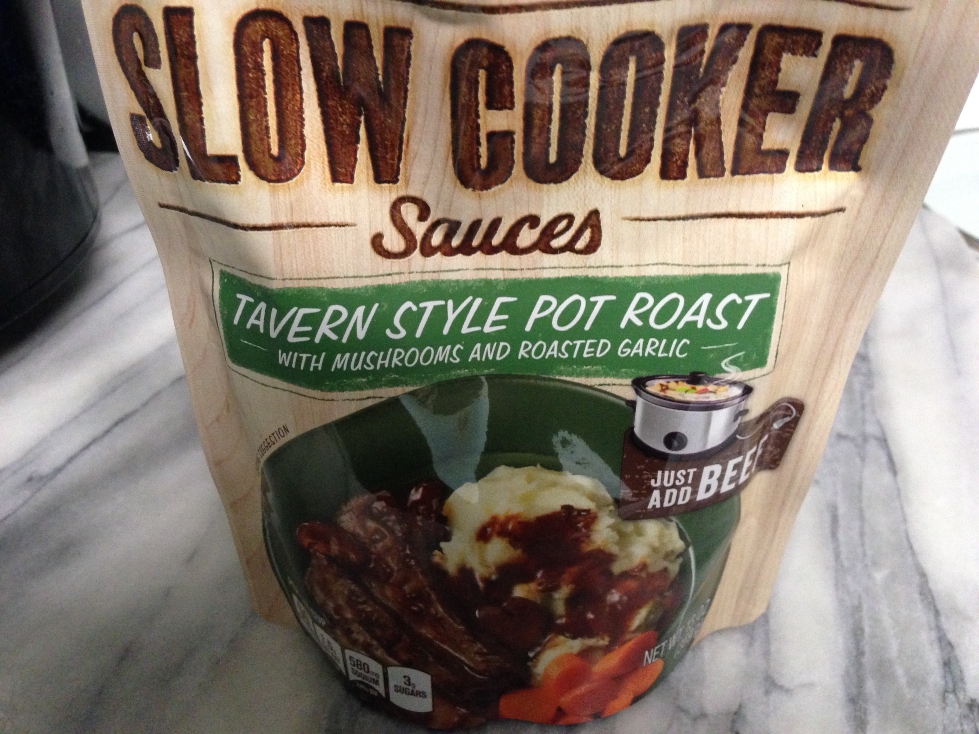 Broncos defensive tackle Terrance Knighton's nickname is "Pot Roast." That's good enough for me. Pour this on top of the chips.

Like I said before, the idea here is to eliminate the need for an extraneous caffeinated beverage with your tacos. So to add that special kick, we're going to pour in four Red Bulls and a single serve cup of Seattle's Starbucks instead of water. Why use water? Water is boring and doesn't even lead to heart attacks. 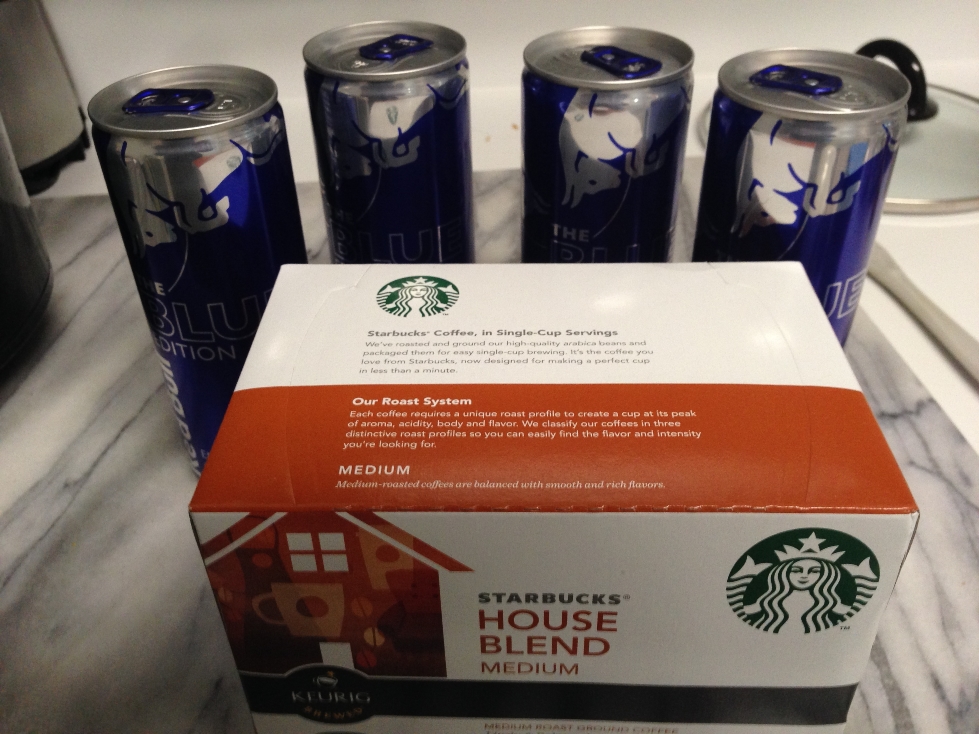 STEP 3) We're not done with the meat yet! In fact, we haven't actually added any real meat. That won't change now! 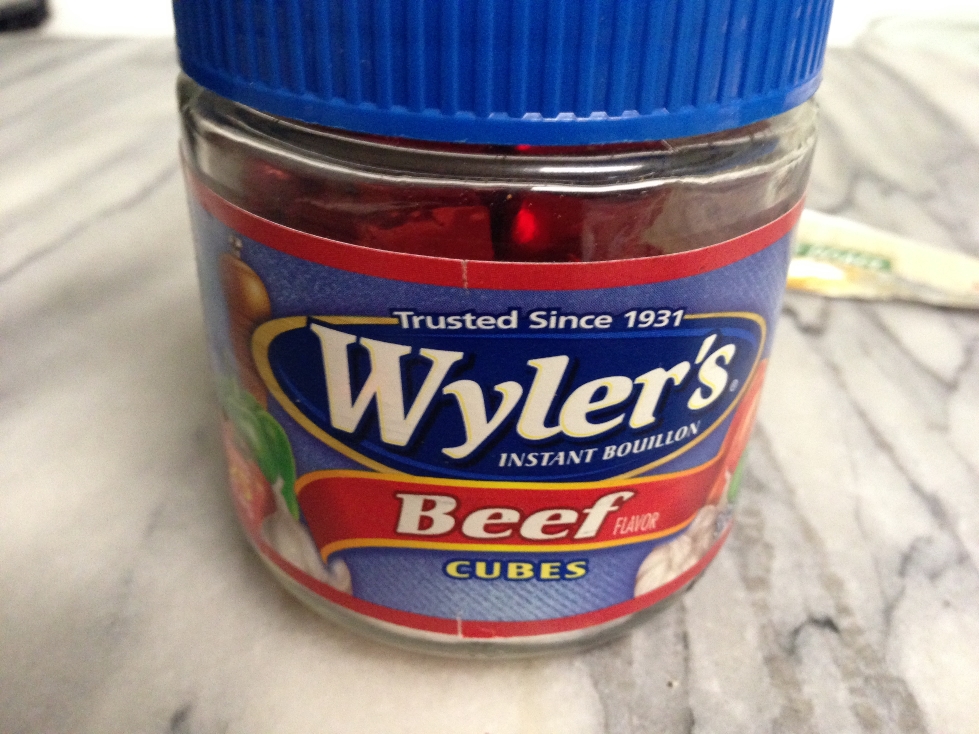 Beef AND salt in the same package! The building blocks of any great taco. I put in about fifteen of these: 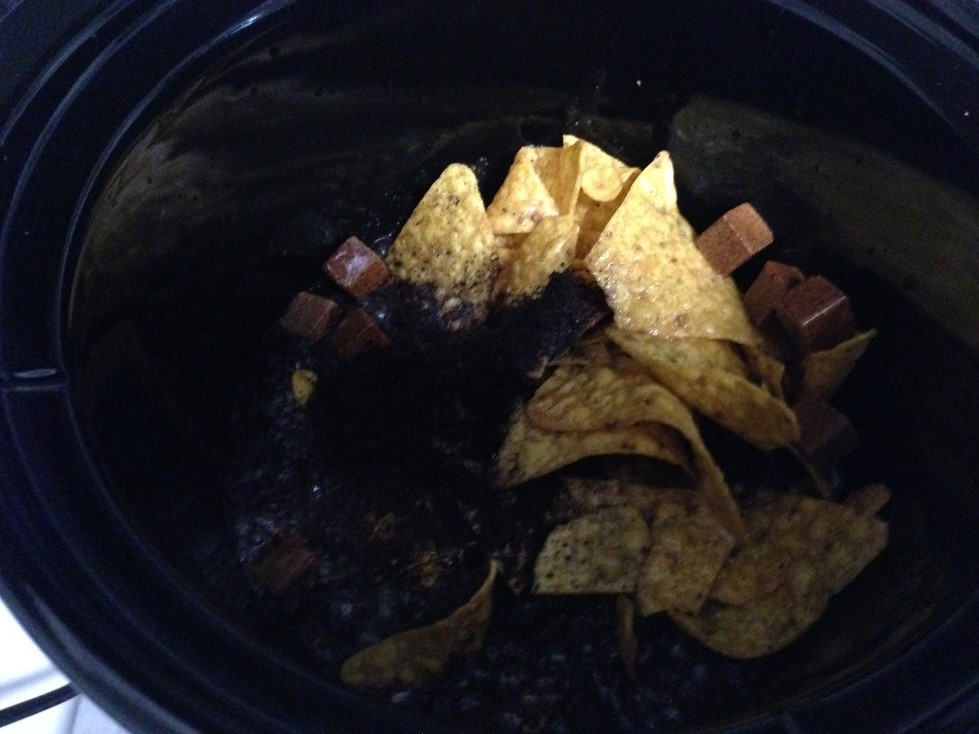 Afterwards, make sure to plunge your fist repeatedly into the slow cooker to break up the chips. If it's too hot, just be quicker next time.

STEP 4) Next up is Seattle's favorite candy / projectile weapon: 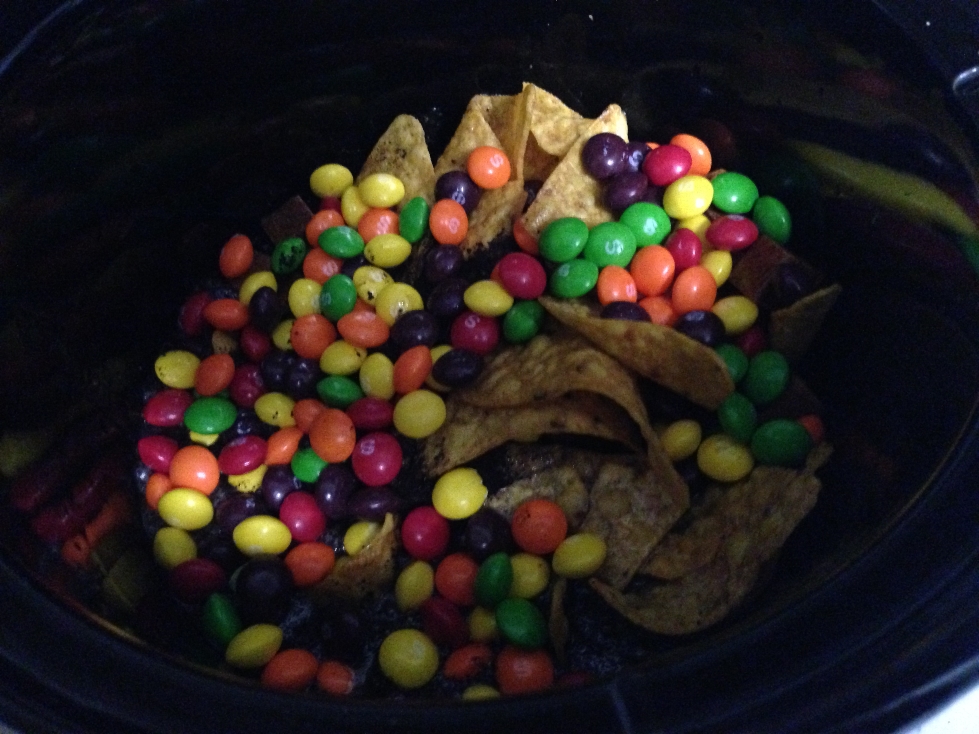 There, that should provide enough sugar for hours of sustained meat energy. Put a cover on it and leave it on the counter for three days. By the end, you should have delicious, boiling taco meat!

STEP 5) On to the taco shells! Right now you may be thinking "Spilly, there's no Denver items in there except a throwaway reference to a DT's nickname." You'd be right. That's because this next ingredient took me two weeks to obtain. I very nearly didn't get in time. In fact, in the comments below, you'll see I've written out a little story detailing my hilarious struggle to receive it. What are they?

Rocky Mountain oysters are basically fried balls. Usually bull testicles, but we need to go bigger. I ordered buffalo testicles on the internet. 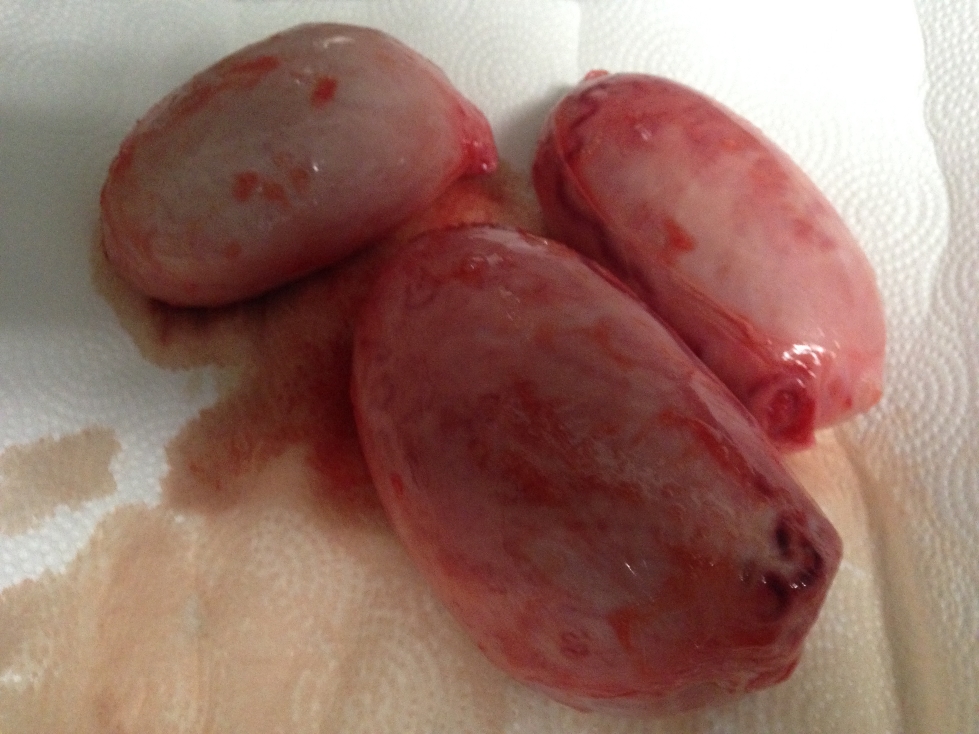 Internet, nothing prepares you for when you open a package (heh) with bison testicles inside. You can prepare, you can (carefully) Google it to try and get an idea of what you're up against. Staring into disembodied nuts makes a man think about what he's doing with his life. It makes him review what actions led up to this point. I was once a man who simply put sausages in Hot Pockets and called it a day. And now here I am.

You know what has to happen now. You don't want it, and I didn't want it. But this is the price to be paid for genius. This marks the moment I lost my humanity. 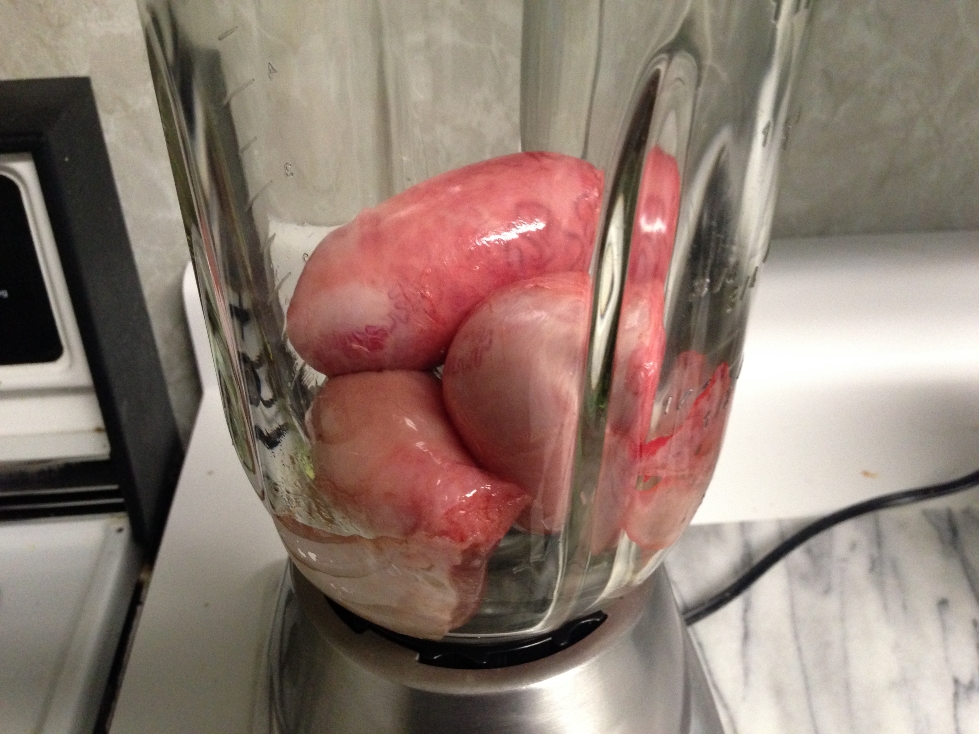 I shattered my innocence

doing what I had to do

I have seen things

things that will take years of therapy to undo

have you ever needed to take balls

put them into a blender

that they don't puncture, they bounce around in the glass

and that the only way to make it work

did you shut your eyes

as you had to stab blindly

and pray that the moment end 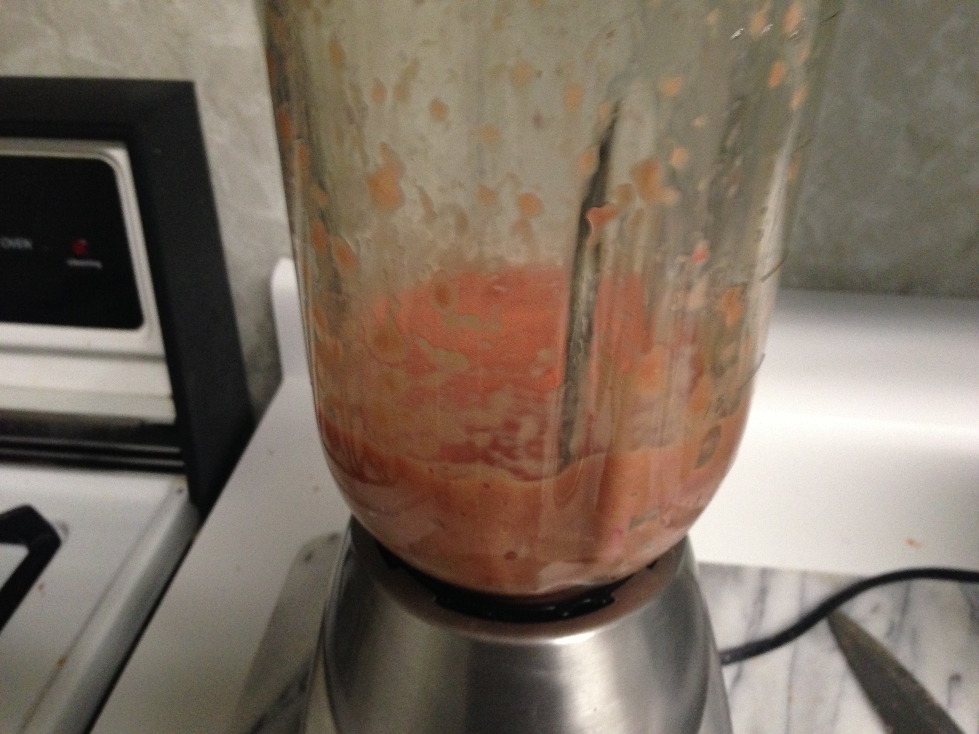 Life became irrevocably different after this. I don't know if I can even look at this blender anymore.

But we move on.

Let's get our next ingredient ready before our souls are corroded further. 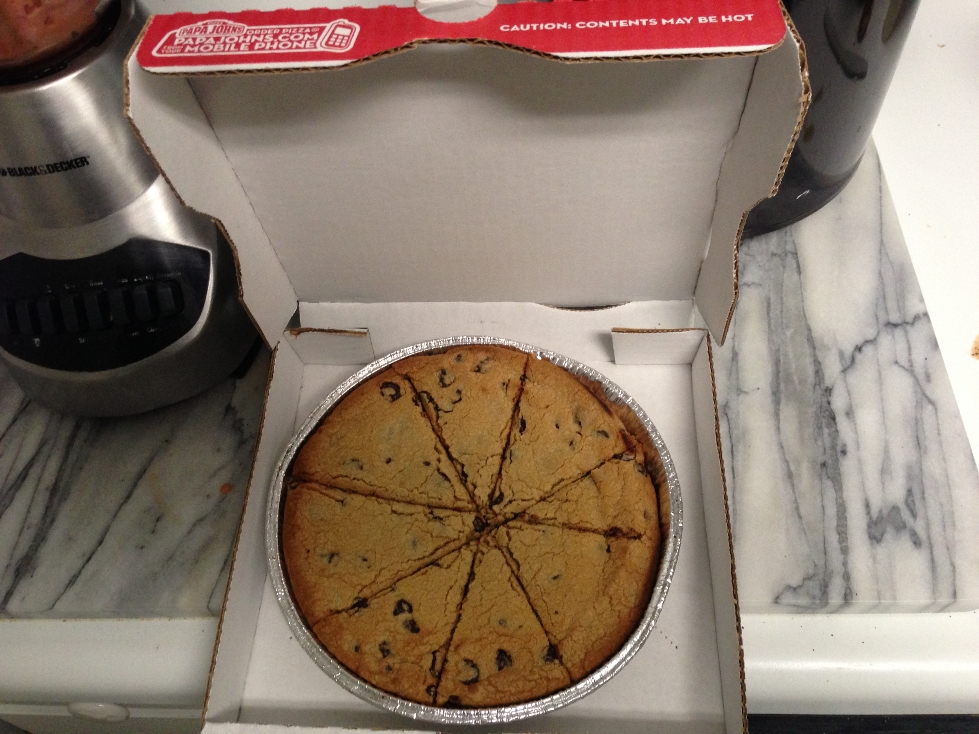 STEP 6) It's a Papa John's sadness cookie! Everyone has asked themselves at least once, "I wish I could have a man drive through subzero temperatures and trudge through the snow to my door just to hand me a sad little box with a cold, burnt cookie inside!"

Not even Peyton himself could sell me on this cookie again. At least it'll make for a good dough base for our taco shells. We just need to put it into the blender with the....ugh. 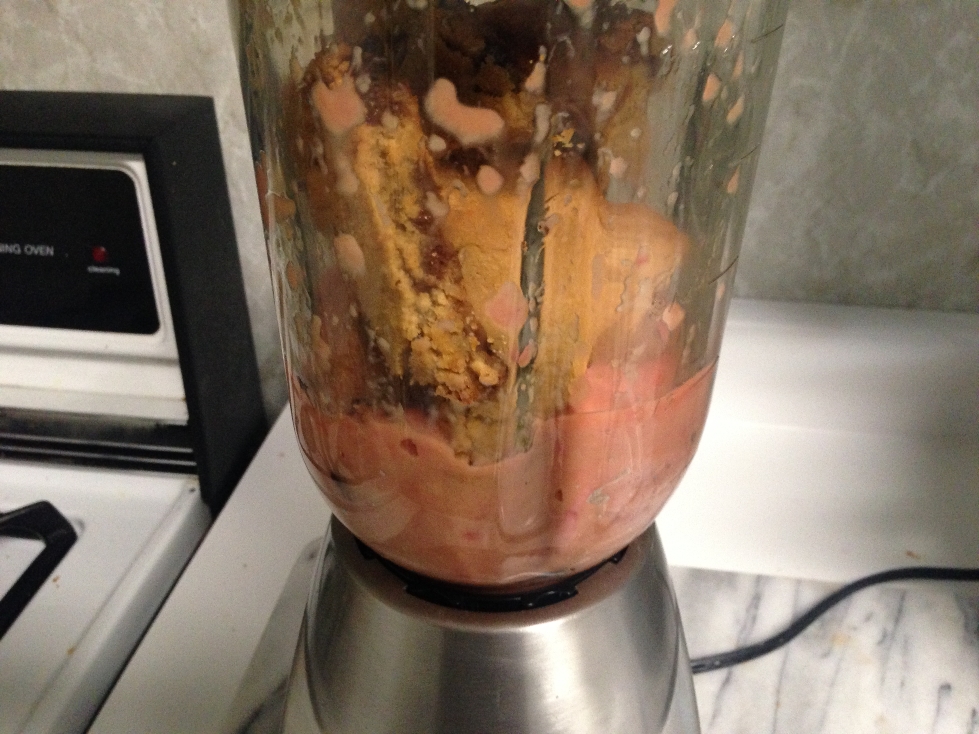 Let's just get this over with. Push all of the buttons on the blender and pour it into a bowl. 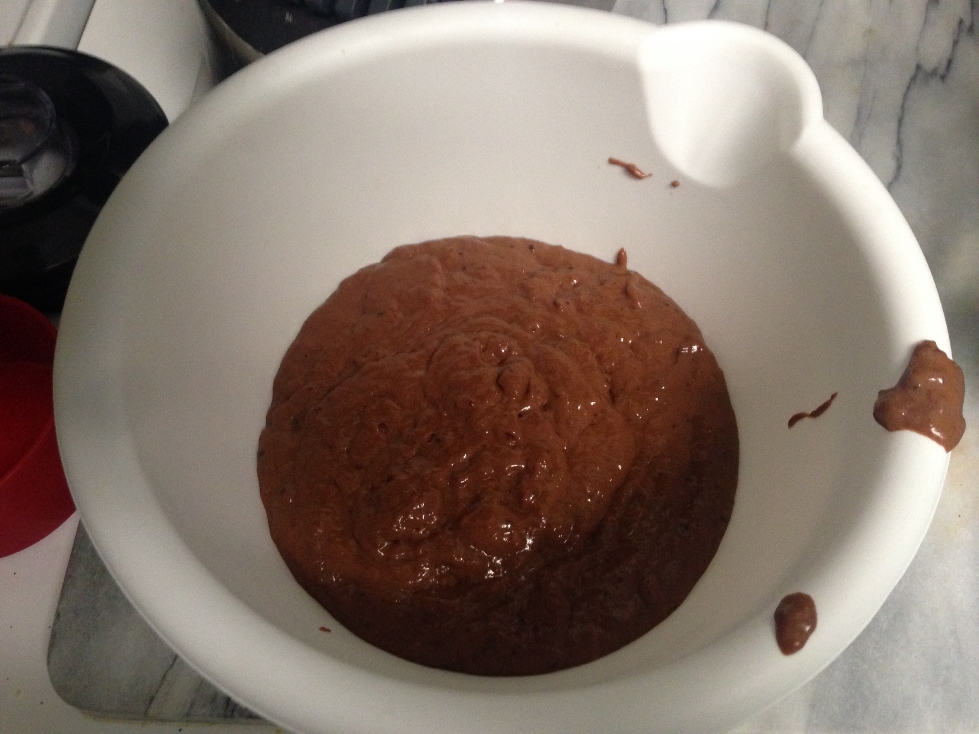 The most terrifying part of this, is that it smells DELICIOUS. I nuked the cookie to soften it for the blender and afterwards my kitchen smelled like fresh cookies. It's completely unsettling. Pour in some flour and mix up until you have a dough ball (heh). 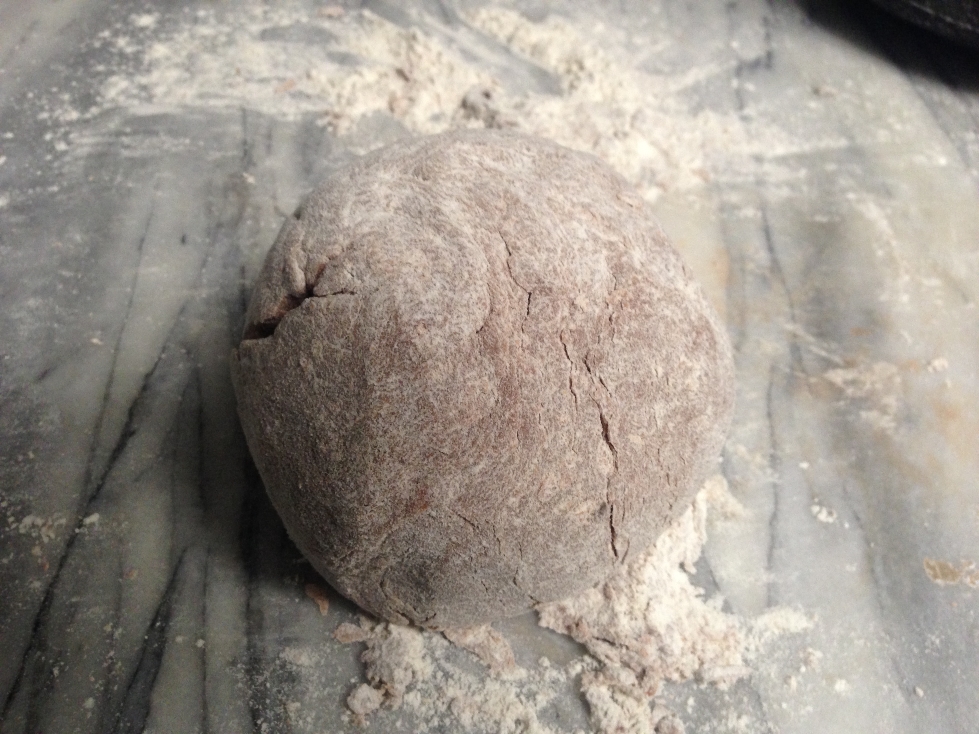 STEP 7) Now, roll it out and place it on a baking sheet. This will be your taco shell. Bake in the oven and go take a shower. Try to wash away what you've done.

Done? Let's go back to the meat! Yes! Open up that slow cooker and see what you've got: 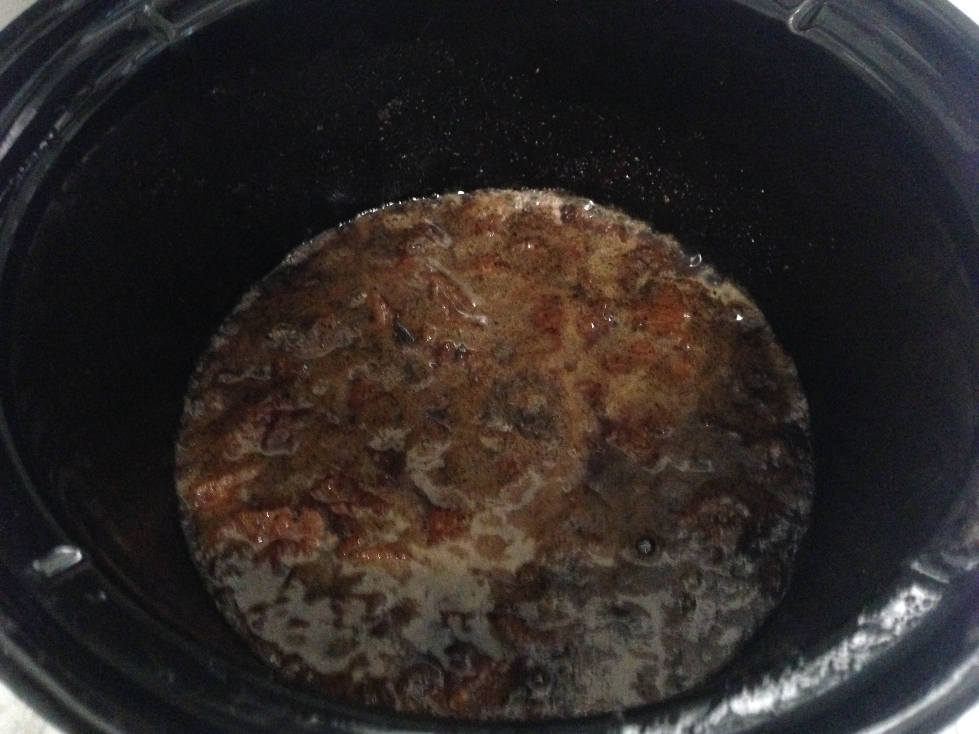 Oooo. Delicious. It smells like feces but you'd probably eat it a hundred times before you tried the shell!

STEP 8) Everything's just about done. I know that the idea here was to just make a caffeinated taco, but if Taco Bell has taught me anything, it's that you can't cross-promote items enough. So we've drinkified our tacos. Let's tacofy our drink. 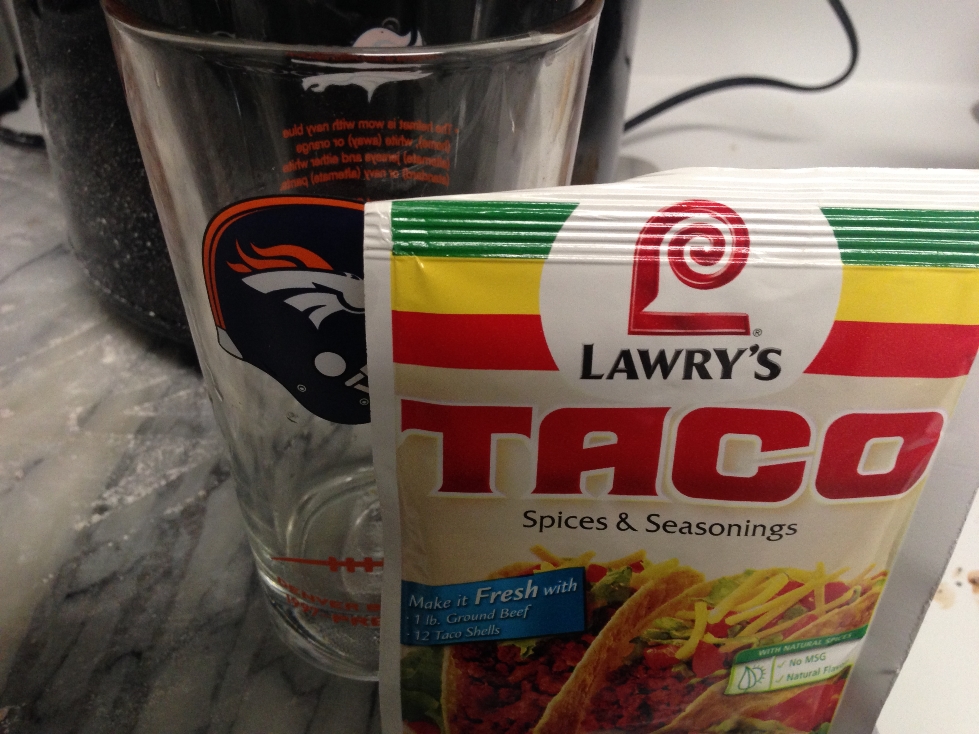 Pour a packet of taco seasoning into a glass. Make sure you use the whole packet so that rich burnt orange color comes through. Next up, carbonation! 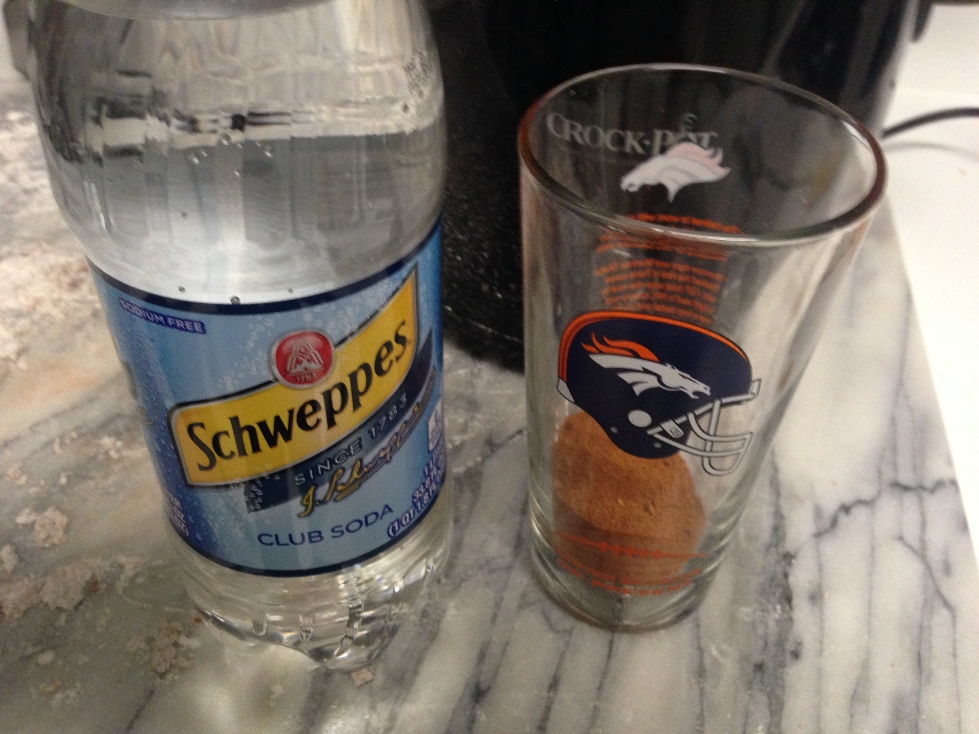 Add a little club soda to the mix. It will take a while to fully mix up, but sooner or later, you'll have a delicious tacosoda! 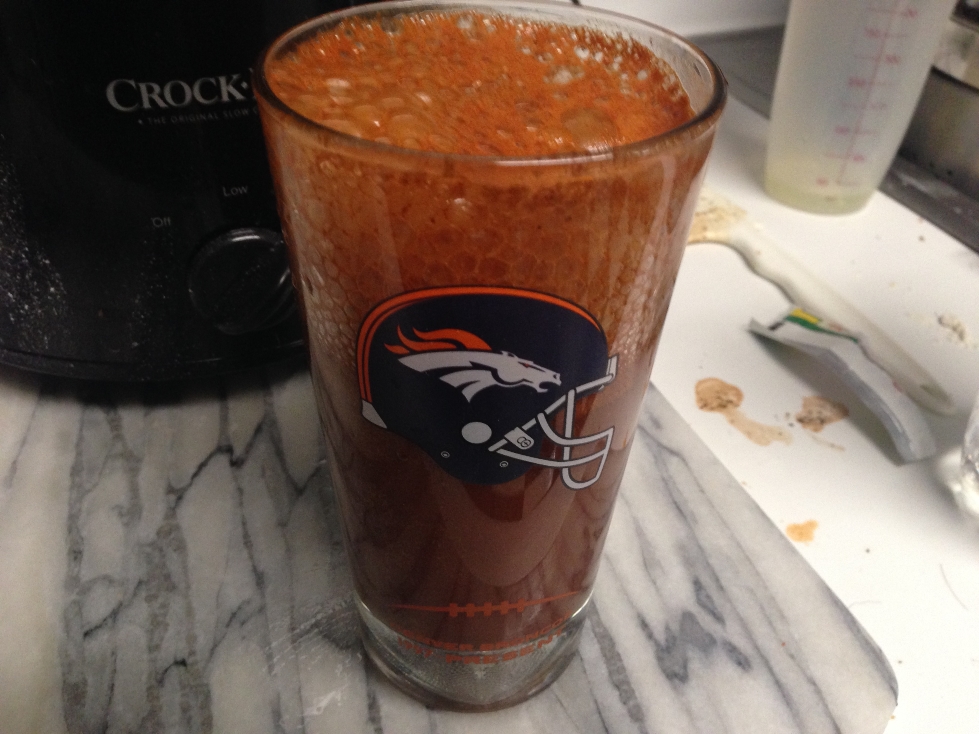 STEP 9) Now then, back to business.

Put the taco shell onto a plate. You may need to fold it slightly. It might break, so be careful!

Spoon the meat (note: does not actually contain meat) onto the shell: 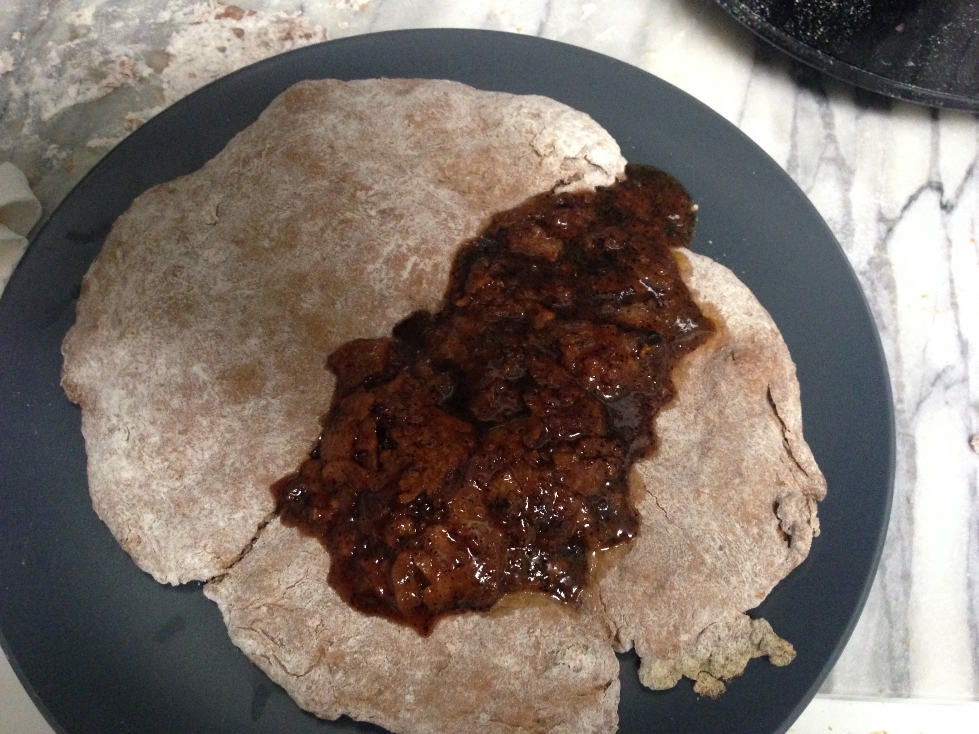 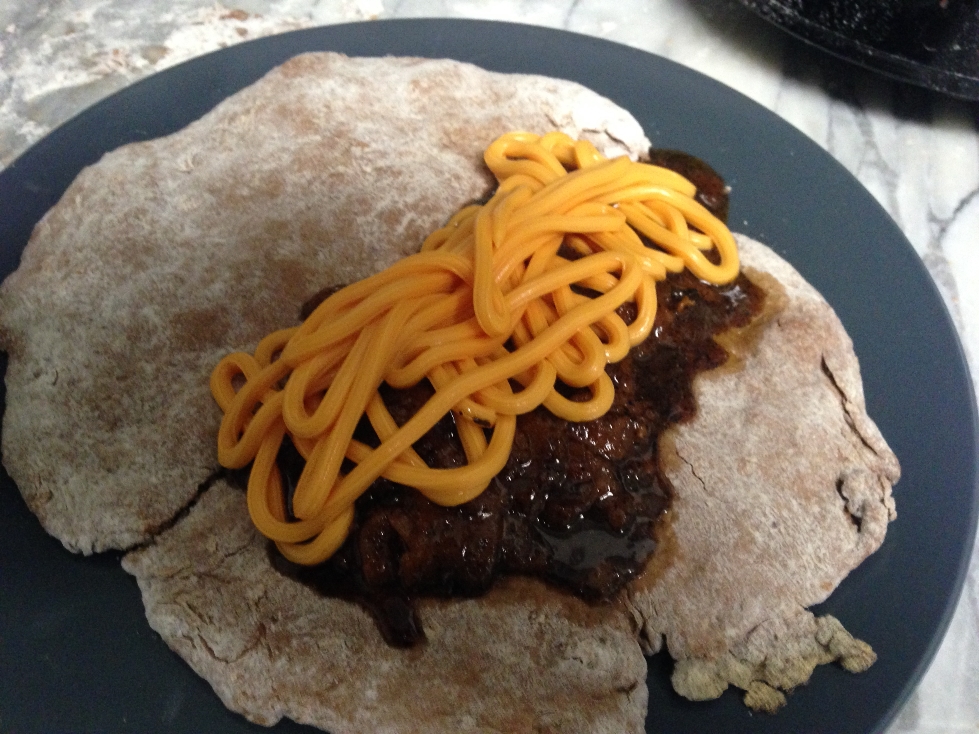 STEP 11) There you have it, internet, our very own Spillytaco! Top with a fresh tangball and consume. It only cost you every ounce of your human decency! Enjoy the Super Bowl! 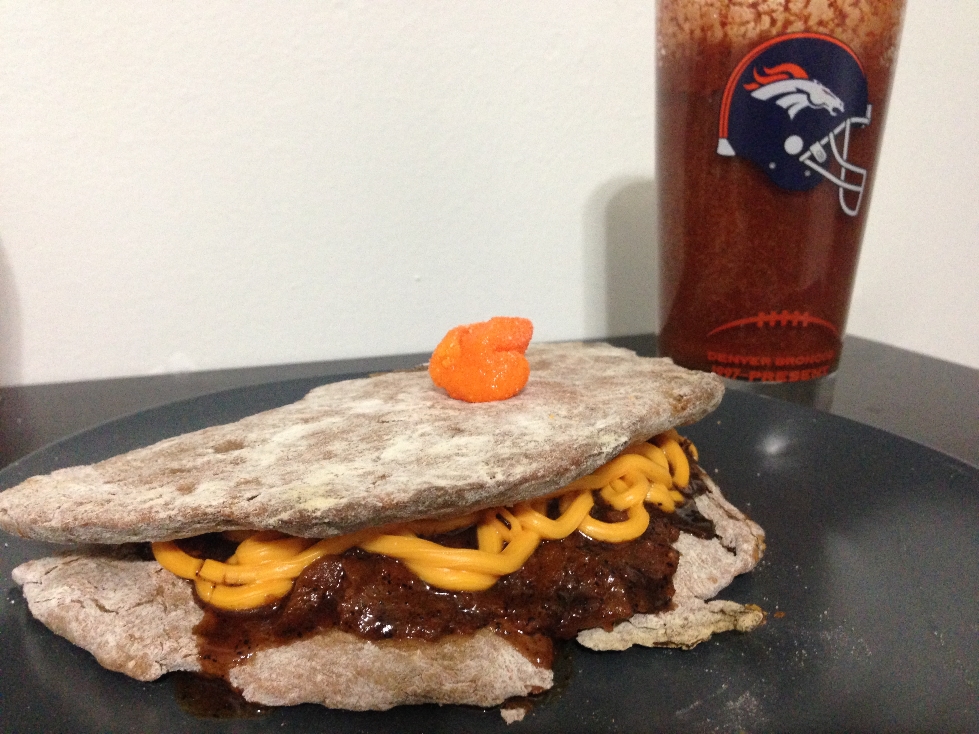