Why Kyrie Irving isn't leaving the Cavaliers until at least 2018

Unless Kyrie likes taking insane financial risks, he's stuck with the Cavs until at least 2018 ... unless they decide he's not worth the trouble.

Share All sharing options for: Why Kyrie Irving isn't leaving the Cavaliers until at least 2018

On Thursday, buzz grew about Kyrie Irving's future in Cleveland. Why? Because in a chat on ESPN.com, Chad Ford was talking about the job security of Cavaliers coach Mike Brown and GM Chris Grant when he wrote ...

Kyrie Irving has been telling people privately he wants out. Cleveland can't afford to lose him and LeBron. They know the urgency.

This became a thing, so much so that Irving had to refute that he's looking to get out after the Cavaliers got pummeled again. Meanwhile, fans started worrying or drooling (depending on their zip code) over the prospect of a Kyrie sprung free.

Fortunately for the Clevelanders this might be stressing out, there is no reasonable short-term path to free agency for Irving, even assuming Ford is dead-on accurate. This is totally a tempest in a tea kettle.

An Early Bird extension would kick in for the 2015-16 season, but he can sign it beginning in July, 2014. He's a two-time All-Star at age 21, so Cleveland will almost assuredly offer the maximum dollars possible under salary cap rules, which will be 25 percent of the team cap for the first year of the contract. (That's roughly $15 million.) Cleveland can deem Kyrie its Designated Player, which allows them to offer a five-year extension that would guarantee Irving max salary through the 2019-20 season.

Assuming Cleveland offers it, Irving can lock that in a few months from now. Giving Kyrie's mixed injury history and the catastrophic situation happening over in Chicago with their franchise point guard, it'd be a huge deal to leave that on the table.

If Kyrie refuses the Early Bird extension, he would become a restricted free agent in July 2015. Cleveland would maintain its right to match any offer sheet he signs. The Cavaliers could make loud noises about keeping him whether he likes it or not, and Irving would be highly unlikely to test them. To really spring free, he'd need to sign the $9 million qualifying offer for the 2015-16 season, allowing him to become an unrestricted free agent in July, 2016.

Got that? Here's a salary chart showing the two options and assuming that if he does bounce his way into unrestricted free agency, he signs a max deal with another team. 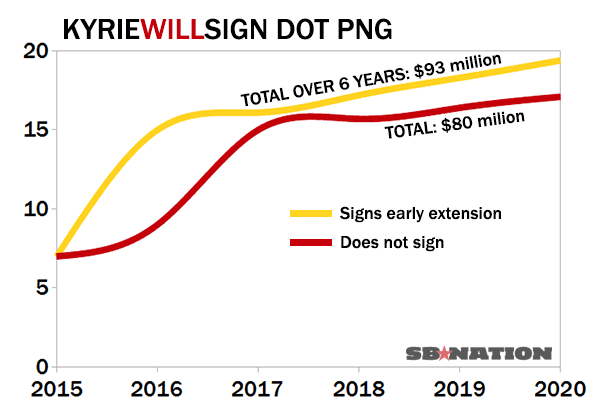 If Kyrie signs a max Designated Player Early Bird extension in July, he immediately guarantees himself $93 million over the next six seasons. If he refuses to sign and works his way toward unrestricted free agency, the most he can expect to make over the next six seasons is $80 million. And in doing so, he plays without a guaranteed long-term contract for the next two seasons on the team he supposedly wants to leave.

This is why no star ever refuses to sign a max-money Early Bird extension.

What some stars have done is locked up the money, but given themselves an out. LeBron, Dwyane Wade and Chris Bosh introduced us to the mini-max deal in 2006. It's a standard max-money Early Bird extension with one simple tweak: there's an early termination clause inserted after Year 3 of the contract. That's what allowed LeBron to leave Cleveland in 2010. If he'd suffered some catastrophic injury, he could have remained under contract until 2012, as he guaranteed all of that money. But he gave himself an option to escape if the Cavaliers didn't build well around him.

The Cavaliers star went on the defensive when asked about rumors that he's unhappy in Cleveland. SB Nation's Cavaliers site discusses the impact of his denial.

If Kyrie wanted a contract like that and Cleveland gave it to him, he could become an unrestricted free agent in 2018. He'd have the magical seven years of service, which means he'd be eligible for a contract starting at 30 percent of the team salary cap. Given that a new national TV deal will be in place by then, raising league revenue and thus the team salary cap, that could be a lucrative option. (That said, there could also be a new labor agreement in place that would not make opting out an obvious choice. Having the option is nice, though.)

The league has set things up brilliantly in terms of keeping first-round picks who become stars on their teams for at least seven years. The incentives to sign that Early Bird extension are too great to pass up. So no one ever passes them up. Not even Kevin Love, who reportedly loathed his GM (David Kahn) and situation. He signed an Early Bird extension, and he could be free in 2015 without having risked any dough. That's the path Kyrie is most likely to take if he really wants out of Cleveland.

Of course, at any point between now and 2018, the Cavaliers could decide to trade Irving and try again if it's not working out. Heck, they could do that right now if it made any sense. But the most sensible route for both sides is to get the extension done and keep building the team around Kyrie's strengths and weaknesses.

Unfortunately for Grant and Cavs fans losing patience, it might take a new GM to get that done.