Could Sunday's NFC Wild Card game between San Francisco and Green Bay rank as one of the coldest of all time? What about Chargers at Cincinnati and the rest of this weekend's games?

What a weekend to kick off the NFL Wild Card Playoffs when it comes to the weather. The first two games are played today and should be the most calm of the four that will be played this weekend. When Kansas City visits Indianapolis for the first AFC Wild Card game of the weekend they will be playing indoors. While it will be chilly and breezy outside, the weather won't impact the game inside.

New Orleans visits Philadelphia Saturday night and while it will be chilly it won't be as cold as it could be or has been in the City of Brotherly Love. Skies will be mostly clear and temperatures in the 20s. Detailed weather forecast for Saturday below. 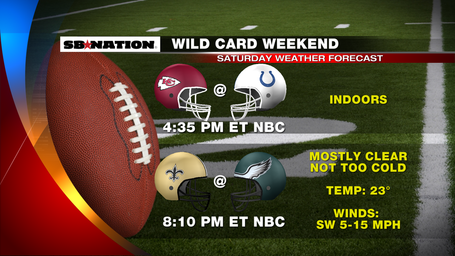 SUNDAY PLAYOFF GAMES:
Where Saturday's games are calm, quiet or played indoors, wild weather awaits the match-ups on Sunday. A wintry mix of freezing rain, snow and rain will be waiting San Diego as it visits Cincinnati. Storm system along a strong arctic cold front will initially spread a wintry mix of precipitation into southwestern Ohio. This will start off as rain and freezing rain for fans traveling to the game and as temperatures warm to near and slightly above freezing rain and snow are possible during the game Sunday afternoon.

The headline game weather-wise this weekend is the match-up of San Francisco visiting Green Bay. Bitter, breathtaking cold temperatures will be in place when the game kicks off Sunday afternoon. Temperatures by the start of the game will already be below zero and could drop to ten below by the end of the game.

The air temperatures alone is enough to cause problems but factor in winds between 10 to 20 mph and you have a very dangerous situation for fans and players when you factor in the wind chill. What is the wind chill? The National Weather service defines it as the following:

During the game, wind chill values will drop to 30 to 40 degrees below zero. This is how the air will feel on any exposed skin and at these low levels frost bite could occur between 10 to 15 minutes.

Not sure Sunday's game will top the list of coldest NFL games ever, but it will easily be in the top 5 and maybe in the top 3. These are the top three coldest games listed by NFL.com 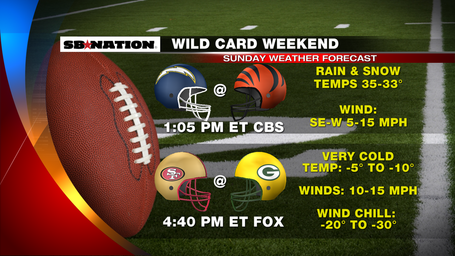