Share All sharing options for: The dogmatic Lee Smith voters

You know, here's the thing about Jack Morris and the Hall of Fame …

Yeah, no. I've mined that ore and licked the dust off my sleeves. There can't possibly be anything new to write about Jack Morris. Beside, I think the notion of a dichotomy is overplayed. Look at Jim Caple's ballot. It's excellent. I'm enthusiastic about everyone on there except Morris. Even then, I'm okay with the people who vote for Morris.

Using Morris as some weird litmus test doesn't work. You know who votes for Morris? Edgar Martinez voters, Jeff Kent voters, Roger Clemens voters, Don Mattingly voters, and Mike Mussina voters. That is, there isn't a generic profile for Morris voters. They run the spectrum. It's not just about stats/anti-stats, as it usually isn't.

But when looking through @leokitty's spreadsheet of publicly released ballots, I did find a litmus-test player. And it's a strange one.

Of the 139 Hall of Fame ballots publicly revealed, 34 writers voted for Lee Smith.

Of the 139 Hall of Fame ballots publicly revealed, 60 writers voted for Barry Bonds.

Only four ballots had both names.

That might not seem odd to you. But it is. It's completely bizarre. These are writers tasked with a simple goal: pick the players who best represent the history of baseball. Not the history of all sports. Just baseball. Once you've narrowed it down to baseball, the writers aren't supposed to worry about the entire history of baseball. Just the last few decades. And to make it even easier for them, some of the very best players during this period have already been enshrined. The writers' job is to pick as many as 10 representatives from a list of 36.

Some of those 36 are players no one would vote for, like Mike Timlin or Jacque Jones, so it's more like a ballot of 25 players. There, that's the job. Of those 25 realistic candidates, pick ten. Take up to 40 percent of the entire list of realistic candidates if you want.

Thirty of the 34 Smith voters didn't take Bonds or Roger Clemens. They reject the idea that both players were Hall of Famers before the steroids, which should make a difference. They reject the idea that neither player was ever convicted or suspended, which should make a difference. If you don't vote for Bonds or Clemens, you don't vote for anyone connected to steroids. Again, okay, whatever. At least it's an ethos.

But why do so many Lee Smith voters subscribe to that philosophy? If you're into visuals, here's a way to visualize these voters: 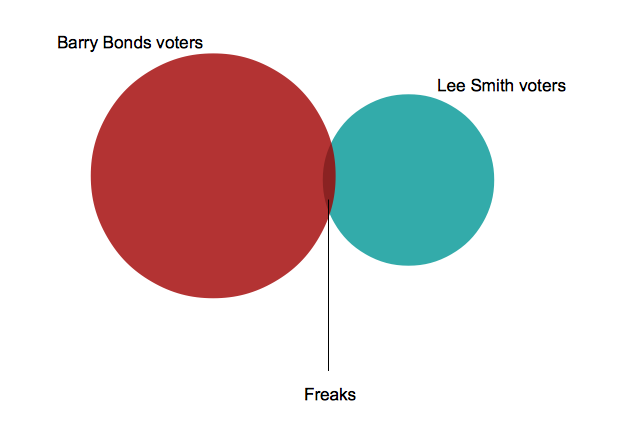 To putting that in perspective: 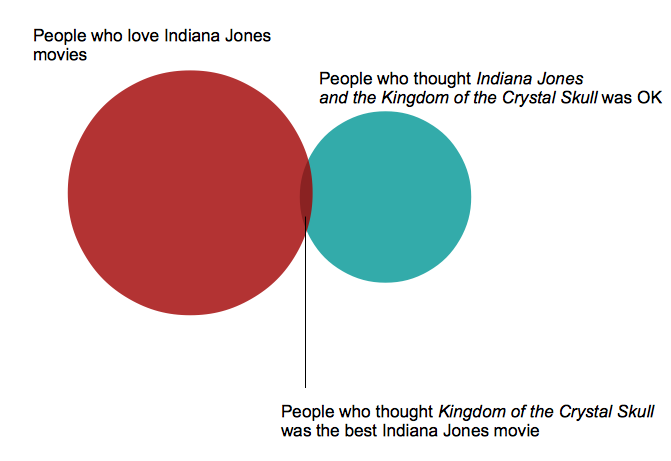 The Crystal Skull people exist. And you'll never meet one. They're rare, freaky rare. They're mimes who have never heard of Marcel Marceau, Led Zeppelin fans who don't care for II. They're statistical anomalies.

Lee Smith fans who have strong, dogmatic beliefs about steroids? They're the rule, not the exception. People who think both Smith and Bonds should be in the Hall? Freaks.

Which means … I'm not sure, exactly.

Smith is a weird candidate.

The top one's Smith. The bottom one is Joe Nathan. If Nathan pitches kinda sorta okay for the next five years, he'll basically have Smith's career. Does anyone think Nathan is five kinda sorta okay years away from Cooperstown? Would five years be enough to sway the current Smith voters?

Doubtful. But there's a bloc that thinks Smith deserves it. And it's the same bloc that thinks Bonds and Clemens have no place in the Hall. It's a litmus test. How much will I agree with [writer]'s ballot? If they voted for Morris, that doesn't answer the question. If they voted for Smith, it means they're strongly against PED users in the Hall, which is a black-and-white position I don't agree with.

The temptation -- the strong, strong temptation -- is to assume these people are low-information voters. These are people who haven't covered baseball for years, and who don't have time for research and nuance. They laugh at newer statistics because they're devoid of intellectual curiosity. They vote for closers because they don't understand the true value of a good-to-great closer. They don't vote for Bonds or Clemens because they've thought about steroids long enough to form an easy opinion, but nothing more. It would be easy, ridiculously easy, to assume this is all true because it would validate my personal beliefs.

No, no. That's not right. Only awful people make blanket statements like that. It's a slippery slope between assuming all Lee Smith voters are dunderheads and being the guy who floods inboxes with FW: FW: FW: FW: FW: e-mails because they're so danged sure they're right. Just because people don't agree with you, it doesn't have to reflect on their character or intellect, you know.

I'd say it's a generation gap, except Bonds and Smith were six years apart. They faced each other a dozen times. Clemens' and Smith's debuts were even closer together.

I can't figure it out, so I'm just pointing it out. Smith voters don't vote for the steroid candidates. To a startling degree. Forget about Jack Morris being the defining candidate on the ballot. For whatever reason, Lee Smith voters are a defining voting bloc of our times.

Feels like you can have a beer with the Morris people, you know? Those people are alright.