The Cardinals and MLB officially released statements on the passing of 22-year-old outfielder Oscar Taveras in the Dominican Republic on Sunday night.

The St. Louis Cardinals and MLB released statements Sunday night offering their condolences regarding the death of 22-year-old outfielder Oscar Taveras in a fatal car accident this weekend. Taveras was reportedly driving on a highway in his native Dominican Republic after returning home for the offseason at the time of the accident.

"We are all stunned and deeply saddened by the tragic loss of one of the youngest members of the Cardinals family," Cardinals Chairman Bill DeWitt Jr. said. "Oscar was an amazing talent with a bright future who was taken from us well before his time. Our thoughts and prayers are with his friends and family."

The Cardinals originally signed Taveras out of the Dominican Republic in 2008. He developed into one of baseball's top prospects before making his debut with the team this year, and made the national spotlight after a huge home run in Game 2 of the NLCS.

"I simply can't believe it," said John Mozeliak, Sr. VP & GM of the St. Louis Cardinals. "I first met Oscar when he was sixteen years old and will forever remember him as a wonderful young man who was a gifted athlete with an infectious love for life who lived every day to the fullest."

"All of us throughout Major League Baseball are in mourning this evening, shocked by the heartbreaking news of the accident involving Cardinals outfielder Oscar Taveras and his girlfriend in the Dominican Republic. Oscar, a young member of the Baseball family, was full of promise and at the dawn of a wonderful career in our game, evident in his game-tying home run against the Giants exactly two weeks ago.

The complete statements can be seen below: 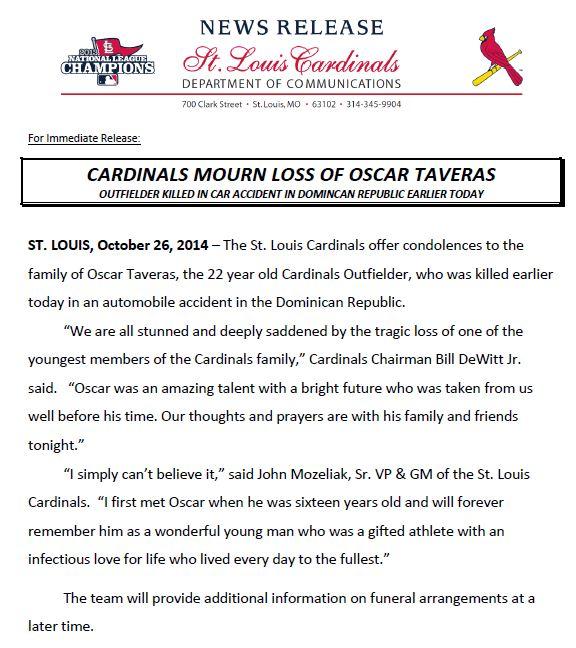