One night turned the 2004-05 Indiana Pacers from a title contender into the most dysfunctional franchise in the NBA. Ten years later, we check in with the key figures from "The Malice at the Palace."

Share All sharing options for: How 'Malice at the Palace' changed the careers of 6 key Pacers

Ten years ago, the Indiana Pacers were a team on the rise, loaded with talented players and seemingly ready to compete for their first NBA championship. A few years after losing to the Lakers in the Finals, Indiana had reassembled an impressive group with a combination of exciting young players and steady veterans.

And then, in a matter of minutes, that all went away. "The Malice at the Palace," as it's commonly known now, effectively broke up the 2004-05 Pacers before they could ever really accomplish anything. On Nov. 19, 2004, Indiana's trajectory as a franchise was altered unlike anything we had ever seen before, or even since.

For a little bit of context, the Pacers and Pistons were among the best teams in the NBA when the incident in Auburn Hills, Mich., occurred. The previous year, Detroit had eliminated Indiana in the Eastern Conference Finals, but the latter was off to a hot start with six wins in eight games.

It seemed like the Pacers were finally arriving as a legitimate contender in the Eastern Conference, with all the pieces in place for a serious run. "The Malice" ended all that, with several key players serving major suspensions before a mass exodus in the following years. Indiana would eventually return to the Eastern Conference Finals in 2013, but it was a long road back. 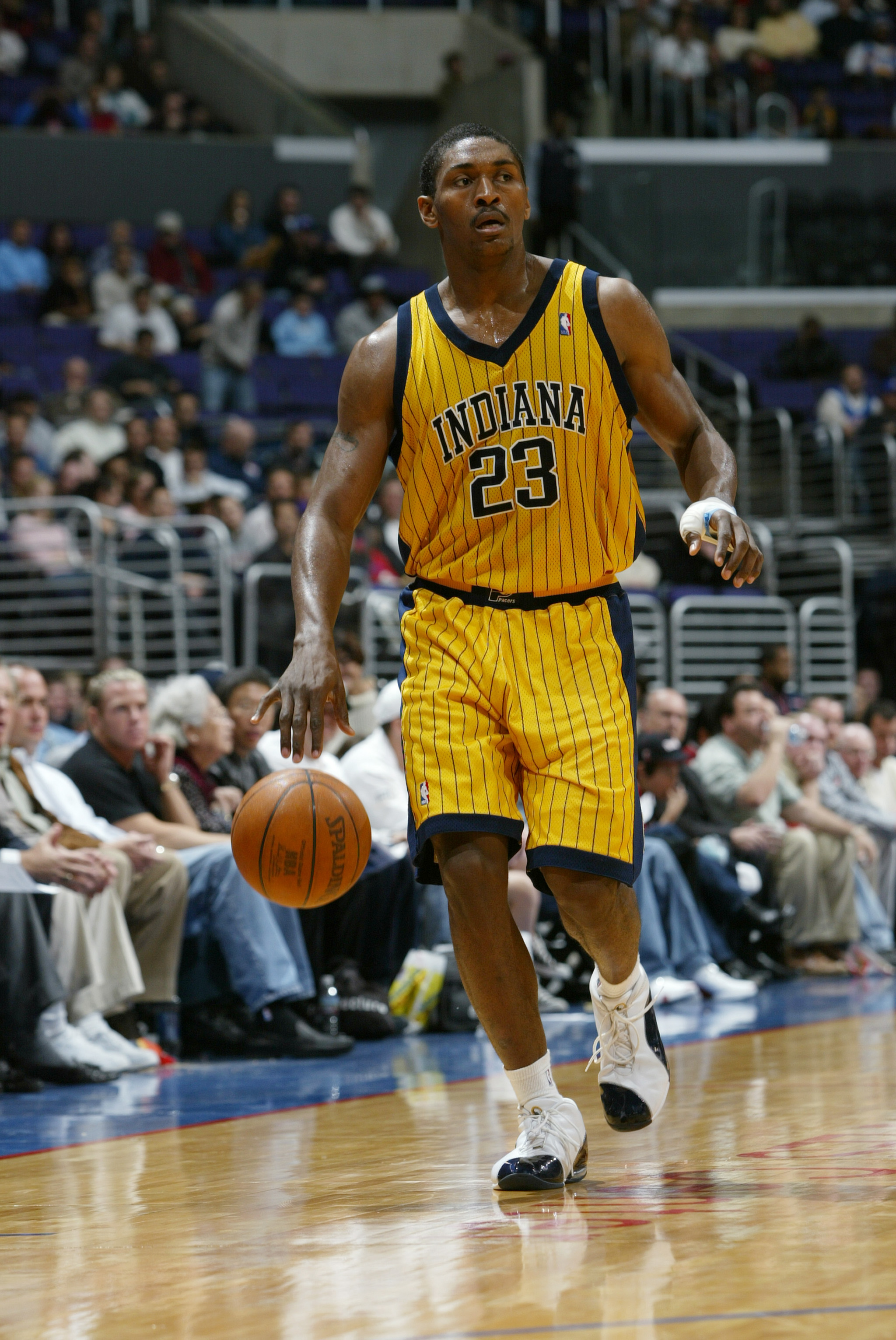 And yet, what about the players involved? We know what happened to the Pacers, with the rise (and possible fall?) of the Paul George-Roy Hibbert era. Now let's take a look at how that fateful night 10 years ago ended up impacting the central figures in Indiana's downfall.

No one played a greater role in the incident that the man formerly known as Artest, who was suspended for the remainder of the season by the league. That's a total of 86 games (73 regular season, 13 postseason) -- the longest suspension for an on-court incident in NBA history -- and nearly $5 million in lost salary.

At the time of the suspension, Artest looked like a rising star, having averaged nearly 25 points per game in the early parts of the season while displaying his usual brand of tenacious defense. He had shown steady improvement over his previous two years since a trade from Chicago and was establishing himself as one of the better two-way wings in the game.

The suspension stifled his upward trajectory, though, More specifically, it spelled the end of his time in Indiana. Artest demanded to be traded just 16 games into the following season and Indiana acquiesced by sending him to Sacramento, where he spent a couple of up-and-down seasons before a year in Houston.

Eventually, Artest would find his way to the Lakers, become a fantastic role player on a Los Angeles championship team and change his name to Metta World Peace. Many fans have come around on the forward, too, and he's known for his constant, peculiar antics on Twitter.

Now, Artest/MWP is playing in China for the Sichuan Blue Whales, where he can be seen wearing PANDA SHOES and generally enjoying life. For a player who was so aggressively villainized in the aftermath of the incident in Auburn Hills, it's fascinating to see how he's rehabilitated his image, even if it's easy to wonder how much more he could've accomplished.

Another player whose image took a major hit after the incident, Jackson was suspended 30 games by the league for his role. He would stick with the Pacers until midway through the 2006-07 season, when he was traded to the Golden State Warriors.

While Jackson didn't leave Indiana as quickly as Artest, his remaining time with the franchise was tumultuous. In October 2006, Jackson and several teammates were involved in a incident outside an Indianapolis strip club in which shots were fired. Players were found to be in possession of guns and marijuana, but no arrests were made.

A couple months later, the team suspended Jackson for "conduct detrimental to the team" after a heated argument with coach Rick Carlisle. At that point, it seemed inevitable that the two sides would part. In Jan. 2007, Jackson was indeed traded to the Golden State Warriors.

Jackson would go on to play well in Golden State for a couple years before wearing out his welcome and moving on to Charlotte, then spend his final years bouncing around with Milwaukee, San Antonio and the L.A. Clippers. Now, Jackson is technically a free agent given that he hasn't officially retired, though it seems unlikely he suits up again.

After all that, does Jackson regret his role in the incident? Not so much:

The true star of the Pacers at the time of the brawl, O'Neal received a 25-game suspension that was eventually brought down to 15 games by an appeal. Unlike the other two big names, who saw "The Malice" and other incidents seriously impact their respective careers, injuries were the big thing to bring down O'Neal.

After playing 72-plus games in each of his first four seasons with the Pacers, the suspension and injuries limited the big man to just 44 games in 2004-05. He would still put up stellar numbers (24.3 points, 8.8 rebounds, 2.0 blocks per game), but this was the beginning of a slow decline through his late-20s.

Over the next three seasons with Indiana, O'Neal played an average of 54 games per season, with his numbers finally declining in the final year. He would bounce around with Miami, Toronto, Boston, Phoenix and Golden State after that, most recently backing up Andrew Bogut for the Dubs.

Last we heard from O'Neal, he was undecided on whether to play this season after the Warriors decided to move in a different direction. Regardless of whether he calls it quits, O'Neal goes down as one of the most productive Pacers of all time. In franchise history, he's No. 1 in blocks, No. 5 in points and No. 6 in rebounds.

Johnson, the backup point guard, was coming off a breakout season that earned him a four-year contract. Unlike the other players involved who received double-digit suspensions, Johnson's role earned him a five-game ban from the league.

With the relatively light punishment, Johnson still played a major role for Indiana in 2004-05, appearing in 63 games, and would stick with the team until July 2006, when he was traded to the Dallas Mavericks for a three-player package. A journeyman early in his career, the brawl didn't help him break out of that pattern for long. Johnson played for four teams over his final four seasons.

Earlier this year, Johnson appeared to be the favorite to land the head coaching gig at the College of Charleston, but pulled out of the running after revealing a 2011 domestic violence incident to school officials. At the time, Johnson was charged with battery and pleaded no contest.

One of the forgotten parties in "The Malice" because he wasn't playing and had a limited role, Miller received a one-game suspension from the NBA. Obviously, the incident didn't do much to impact his public perception, as he had little trouble making the Hall of Fame after retiring at the end of the 2004-05 season. Now Miller works for TNT, where he occasionally inflicts damage on our ears.

A rookie at the time, Harrison wasn't suspended by the league, but received a fine, community service and probation as part of the legal proceedings resulting from the incident. A middling big man, Harrison would stick with Indiana through 2007-08 before drug issues contributed to his departure from the NBA. Harrison wrote about the incident and its aftermath recently, saying, "We traded away a playoff team for one starter and three bench players in an attempt to 'lighten' things up." Harrison last played in China.