At this time, no one knows how things will work out for Michael Sam in the NFL. But it appears the football part will be less challenging for Sam than everything else will be for everyone else.

Imagine a firehose whipping out of control, a torrent of scalding-hot takes blasting freely and at high pressure from its nozzle. Hundreds of interchangeable goateed "Keener And The Gristle Man" types hold on for dear life, trying to aim the hose in one direction or another. There are other men, big men in suits, hanging off it and making different noises as the hose whips them around; these are the television guys. And that is your sports discourse. Mike Francesa is not holding onto that hose.

Francesa is the ulcerous anthropomorphized double-cut pork chop who bestrides the sports talk radio scene like a smug colossus draped in wrinkle-resistant Jos. A. Bank shirts. In this metaphor, he is probably sitting in a director's chair with some stupid nickname for himself on the back, grimly drinking diet soda and scoffing at the amateurish technique of those tasked with hanging onto the hose. He is legitimately wondering why more people don't approach him for investment advice. He is above all this, but also there's a gravy stain on his shirt.

This is no hero, for those unfamiliar with his work. Francesa gleefully bullies those he deems his inferiors -- callers and employees head a long list, here -- and humps away shamelessly at the legs of the powerful. The vastness of his self-regard is difficult to convey without reference to planets. He takes responsibility for nothing. He is not quite playing the same game as everyone else, but neither is he playing it admirably, or even well.

And yet, when Mike Francesa talked about Michael Sam on the radio earlier this week, he came as close to being useful as he ever gets. It helped, if that's the word, that Francesa was basically Cyd Ziegler in comparison to his callers, a nightmare army of Long Island Sal's and Donnie's In Boonton demanding to know, one after the other, 1) why this was news and 2) what about the showers, the naked showers.

It's unclear whether Francesa -- who has taken that tack himself in matters having to do with gay athletes -- refused to humor them because he so plainly loathes his callers, or if he actually understood that there was some objective import to a rising NFL prospect refusing to pretend to be someone he isn't simply because who and how he is might bother his (generally reactionary) future employers. The result, either way, was exceedingly wince-inducing radio. But there was something instructive buried amid all these weeping sacks of gay panic and piles of hot male garbage. More surprising still, this instructive thing came from Francesa himself.

It was, granted, an accident. Francesa and his callers generally agreed that they did not want to talk about this thing that they were talking about. "Listen, if you are a regular player, just a normal, everyday football player getting ready for the NFL draft, you don't discuss your sexuality," Francesa explained, with his characteristic impatience. "It's not an issue."

This is a typical Francesa sentence, in some ways -- notably, for the righteous peevishness and profound but vague sense of disapproval -- but is atypical in that it contains some perspective. It's up there at the front, in the bit about the Normal, Everyday Football Player. Francesa doesn't seem to think he's talking about Michael Sam, there, but he is.

On a human level, it's easy to understand why Michael Sam was moved to come out, first to his Missouri teammates and later to everyone else. Sophistry and braindead partisanship in sports media tend to confuse that simplicity; that discourse's loudest voices seem, in fact, to take that confusion to be the discourse's purpose. There are too many hours to fill and not enough worthy thoughts to fill them. Those paid to do so bat at these questions ineffectually, dyspeptic man-kittens pawing various buzz-y balls of yarn until their shows are over.

Sam is not being dropped into an NFL locker room from a teacher's lounge or the break room at Big Lots. He is re-entering an environment in which he has spent much of his life, and he is entering it as himself.

In days to come there will be parsings of what Sam's announcement means and why and for whom. We will likely see stagy kayfabe showdowns between people whose paychecks are dependent upon the idea that there are somehow two sides to this story, and more broadly upon the idea that the huff and puff of total strangers might have anything meaningful to add to that story. People whose careers are based in the manufacturing of distraction will ask -- in idiot earnest or under the pretense that the answer is somehow not up to them -- whether this story will prove to be a distraction.

There are two simple answers to that most rhetorical of questions. The macro answer is "Yes, it will become a distraction if you think that sports fans will want to watch or listen while you woof about it." The micro, as expressed by former NFL receiver Donte' Stallworth, is "Yes, it will distract distractible/bad teams and not those that are more focused/better." That question doesn't really matter relative to the bigger, simpler thing that is Michael Sam's decision to publicly be the person he is.

If we think of growing up as the process of more fully becoming ourselves, then Sam's realization and evolving unwillingness to live in anything but that truth was inevitable and inexorable and utterly right. There is no one else he could've been and really been himself; he can only be who he is. This is true for everyone, of course.

If anyone does not understand how essential it is for Michael Sam to live as honestly and fully as he can, that non-understanding must be based on a stubborn insistence upon not understanding it. That refusal is built on preferring a bespoke, custom-fitted abstraction to Sam's non-negotiable truth.

We all retreat into these sorts of abstractions to one degree or another and in one direction or another. But there is a darkly comic delusion running alongside the other, larger bleakness in Michael Sam's father telling the New York Times of his disgust at his son's sexuality. "I'm old school. I'm a man and a woman kind of guy," Sam Sr. said, before making a point about "Deacon Jones turning over in his grave."

The dark comedy is in how much room Sam Sr. allows himself in his own self-perception -- this is the sort of old school, man-and-woman guy who bailed on his wife and eight children and then moved across the state. The just-plain-dark part is how willfully abstracted Michael Sam Sr. is in his understanding of his son's orientation. He, just as plainly as everyone else, can see how relentless and fearless his son has been in the process of becoming himself, and in making for himself a life he can be proud of. Presumably he also watched him burn down the SEC last season.

But, for reasons of his own, Sam Sr. insists on not seeing the story that is right there to see. He is distracting himself. The same is true, less heartbreakingly if not all that differently, in the NFL GM's grimly (and anonymously) professing concerns about clubhouse chemistry or the college coaches reputedly looking to make cynical recruiting hay on Sam's story or in the doofy double-talking sophistry of ESPN's coverage of the story so far. There is a simple story, here, and none of the aforementioned dare look at it straight on.

The good news is that this particular abstraction is shallow, and already evaporating. (Sam Sr., notably, sounds a lot less conflicted here.) There are surely some who will sincerely loathe Michael Sam for being who he is, and that's their right. But this whole multi-layered distraction is too flimsy to withstand the force with which Michael Sam is preparing to collide with it. Every glib bit of would-be controversy, every sophistic worry and concern, can be blown up with the greatest of ease. And Michael Sam will be the one who does it. 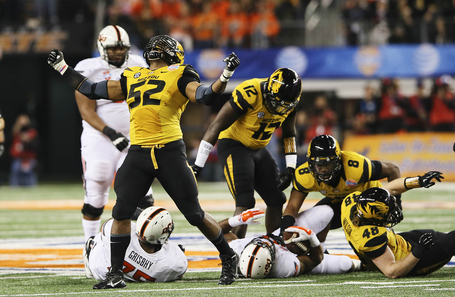 Michael Sam is who he is, and he will do what he does. That, in itself, will be enough. For all the things in our country and our discourse that are haywire and rotten and revanchist and wrong, there does seem to be some progress on this particular front -- an increasing realization that gay people are best understood not as an exotic subspecies of humanity, but simply as people, if only because that is fundamentally and finally what they are.

By this same token, Michael Sam is not a gay football player so much as he is just a football player. This makes it that much more objectionable that those who sell this sort of idiot sizzle continue to do it in blithe disregard of how foul this abstraction truly is. It makes the casually backwards and proudly ignorant fake-pragmatism of those anonymous NFL personnel types look even worse. But there will, when it comes time for Michael Sam to play football, be no place to hide for any of that bullshit. He will flatten that abstraction simply by doing what he does while being who he is.

So here is a not-so-fearless prediction: Michael Sam's impact upon clubhouse chemistry, and the locker room's impact upon him, will not be an issue. He is not being dropped into the Hobbesian bro-scape of an NFL locker room from a teacher's lounge or the break room at Big Lots. He is re-entering an environment in which he has spent much of his life on earth, and he is entering it as himself -- that is, as a very good football player preparing to make the ascent that his talent has earned him. His teammates will see him as such, because that's what he will be to them. The Senator from Utah will be more upset about there being some gay sailors on a submarine than anyone on that submarine will be; he can afford to be in a way that they can't, if only because he is so much further from the thing itself.

Those anonymous GM's and vaguely perturbed TV types and Mike Francesa and his callers can't see this because they are too stubbornly stuck in football's dumbass masculine self-romanticism and even dumber stereotypes surrounding sexuality. But Francesa perfectly described Michael Sam to his listeners when he thought he was describing everyone else. Michael Sam is, finally, a normal, everyday football player, preparing for the draft. It's not an issue. Why is this news?

• NFL mock draft: The Rams get a new quarterback

• Evaluating Michael Sam on the field