The Knicks' record is upside down, and more stories of NBA underachievement

Which teams have underachieved compared to expectations? You will be unsurprised to learn the identity for No. 1 in this category, and not just because I spoiled it in the headline.

Share All sharing options for: The Knicks' record is upside down, and more stories of NBA underachievement

We're deep enough into the NBA season to assess which teams are on the path to failure, but one of the debates not easily settled is in judging which team is the biggest surprise or the biggest disappointment. So much of what we perceive as success or failure in sports is dependent on expectations. And how can we accurately judge expectations?

One way is to look to Vegas. Sportsbooks take bets on teams' win totals before the season begins. These over-under lines are as good as anything in determining expectations, since the lines are placed to draw bets on both sides. So if we take those preseason over-under lines and compare them to the win total teams are currently on pace to achieve, we get a good idea of which teams are over- or underachieving the most.

There's no surprise on the list of pleasant surprises: The Phoenix Suns, with an preseason over-under of 19.5, are far and away the top overachiever this season. On pace for 49 wins, Phoenix has exceeded expectations by almost 30 victories. The Suns, 30-21, actually already have 150 percent of the wins Vegas pegged them for in the preseason. It's early February. No team comes close to beating Vegas expectations as much as Phoenix has so far.

OK, enough with the pleasant surprises. This is the internet, this is 2014. Let's get mean! Which teams are underachieving the most given preseason Vegas expectations? 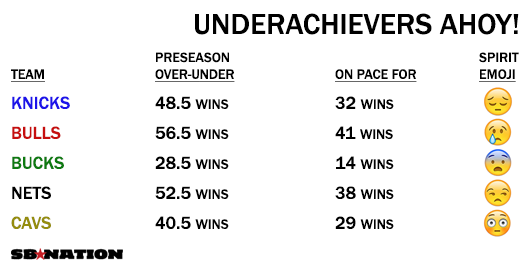 And then the Knicks have gone out and blown that totally. New York could hit the over only by going 29-2 or better the rest of the season. Vegas' expectations would have the Knicks at 30-21. Instead, they are 20-31. The Knicks are one game worse than totally upside-down. Downcast Emoji indeed.

But the Bulls have been equally as underachieving given extremely lofty expectations (56.5 wins!). Derrick Rose's injury blew that to bits, and while Chicago has stayed around .500 and is even challenging for the No. 3 slot in the East bracket (which is unbelievable), it's nowhere close to what Vegas thought they'd do.

Vegas expected the Bucks to stink, with a 29-53 record beating the line. Instead, the Bucks are 9-42 and on pace for 14 wins. Welp! The Nets and Cavs are also on pace to fall short of expectations by at least 10 wins.

One of the amazing things about this little peek into expectations and reality is that the five teams that have underachieved the most are in the East and the three most overachieving teams are in the West. (Nos. 4 and 5 are Indiana and Charlotte. Vegas put the Bobcats' line at 26.5; they are on pace for 35.)

The question behind all of this is how much expectations should matter. Coaches' jobs, GMs' jobs, players' contracts, trades, rebuild decisions — all of that relies in some way on expectations. Should it? And if so, isn't it in the interest of coaches, GMs and players to set expectations as low as possible? If Mike Woodson came out in October and said, "We lost our veterans, we shot unsustainably well most of last season, Raymond Felton is much worse than he looked in 2013-14, J.R. Smith has proven to be pretty unreliable over the long-term and we'll be lucky to make the playoffs" — wouldn't he be more likely to keep his job?

Of course, this is purely hypothetical: no coach would ever rain on his own season before it ever began. Preseason honesty or even pessimism would upset the delicate blame balance system present in the NBA. If teams with high expectations fail, GMs blame coaches. Coaches blame players (or the lack thereof). People get fired, teams get rebuilt, new expectations are set. It's the way things are and will continue to be.